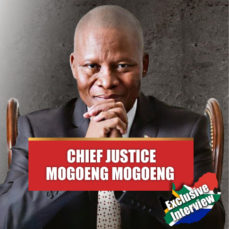 Mogoeng Thomas Reetsang Mogoeng is the current Chief Justice of South Africa. He holds an important role in the landscape of South African politics, and is bringing Godly values back into government. He is a man who is fiercely committed to our country’s constitution, upholding the law, and is sold out for Jesus! He has been in office for 9 years, and has garnered a significant admiration and respect from South Africans. JOY! reached out to Mogoeng during the lockdown to speak about the state of our nation and to hear what God has placed in his heart.

Q. You were appointed Chief Justice in September 2011. During your term, South Africa experienced political turmoil, economic distress, and a state of disaster. Your leadership provided much needed stability and direction to the nation in times of uncertainty. Do you believe God prepared you for a time such as this?

Q. Some politicians have criticised the Courts for judgements they disagree with. How do you ensure the Judiciary remains independent in the face of political intimidation?

Q. The judiciary played a vital role in disrupting corruption. What more can the courts do to combat and even eradicate corruption in South Africa?

Q. What do you believe a post-pandemic South Africa will look like?

Q. You have assumed leadership of the ‘50 Days of Healing’ initiative. Do you believe South Africa can successfully heal the divisions of the past?

Q. Is the Church doing enough to promote forgiveness, reconciliation, and healing?

Q. The Constitutional Court ruled the Electoral Act unconstitutional, paving the way for independent candidates to contest the General Elections. Do you believe this will fundamentally change South African politics?

Q. Your term as Chief Justice ends in 2021. But the nation needs strong principled leadership. What role do you see yourself playing in South Africa’s future?

…to read Mogoeng’s answers, pick up a copy of the latest issue of JOY, which is now on sale nationwide in all leading supermarkets!

While there may be many reasons for tension between the scientific community and creationism, there are plenty of reasons why they should be able to co-exist peacefully. There are no logically valid reasons to reject creationism in favour of naturalism, as the scientific community has done. Creationism does not inhibit discovery, as evidenced by the titans of science who believed strongly in it. The derisive attitude spewed at creationists has diminished the number of capable and willing minds in many fields. Creationism has much to offer science and the scientific community. The God who made the universe revealed Himself through it (Psalm 19:1); the more we know about His creation, the more glory He receives!

Rolene and Ledivia Strauss are sisters-in-law, medical doctors, and love the Lord unashamedly. They have walked with Jesus since they were young. As a 12-year-old girl, Ledivia’s mother led her to the Lord as they knelt down together in her mom’s bedroom.

Rolene was baptised last year. As the former Miss South Africa (2014) and Miss World (2014), she not only completed her medical studies, but recently also obtained a master’s degree in management coaching.

Together, Rolene and Ledivia have opened a holistic medical practice, RevitaHealth, focusing on clients’ and patients’ physical and emotional well-being. JOY! chatted to these beautiful ladies about their faith, the myth of the perfect woman, and about health from the inside out…

The Western Cape Education Department’s has proposed Draft Guidelines on Gender Identity and Sexual Orientation in Public Schools. The purpose of these guidelines includes “promoting gender identity and gender expression”. If adopted, the Guidelines will apply to all public schools in the Western Cape and will potentially set precedent for similar Guidelines or policy in other Provinces.

The issue is not simply one of equality (treating all learners the same), but of learners’ privacy and safety which cannot simply be overridden in the name of promoting a particular ideology.