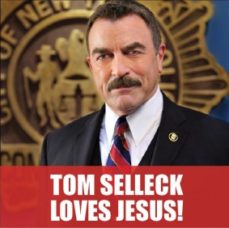 Upon hearing that we would feature Tom Selleck as our June cover story, I was both extremely excited, and slightly hesitant. Hollywood is known for its lack of morals, its advocacy of debauchery, and its blatant disregard for our Christian faith. I was blown away however, as the more research that I did on Tom, the more I fell in love with his powerful testimony and bold love for Jesus. He stands out amongst the thorns in a city of sin.

72 years old and still going strong!
Thomas William Selleck, born 29th January 1945, is a Hollywood heartthrob who has captured the hearts of many women over the years. Tom is known for his lead role as Thomas Magnum in Magnum, P.I., as well as more recently for his role as Frank Raegan, NYPD Commissioner, in the popular TV series, Blue Bloods. The characters that he has always portrayed are those of high moral standing and valour, but this is not just an act. Selleck has received many awards and accolades due to his outstanding character.

I was one of the privileged few that looked out over the vast grassy plain from a koppie just outside Bloemfontein on March 3, 2017. At that stage there was no budget, marketing plan, disaster management plan, or infrastructure in place and no one knew what we were planning. Uncle Angus let his gaze linger over the plains and asked, “Do you see the millions of people who will be here?” I immediately realised that this was the biggest step of faith that I ever saw anyone take, and also realised that what we were talking about, was humanly impossible. However, I had to practically learn that what seems impossible to me, is easy for God! Seven weeks later I stood on the same koppie and watched tearfully as more than one million people streamed in with one goal in mind  –  proclaiming Jesus as King of our lives and Prince of Peace over South Africa!

Earlier this year, the Cape High Court ruled that the ban on marijuana was unconstitutional. The court declared parts of the Law on Drugs and Drug Trafficking and the Medicines and Related Substances Control Act in violation of the Constitution in so far as it violates the private use of dagga for personal purposes. This ruling means that adults can now own, grow, and use dagga in the privacy of their home or property. However, it is still prohibited to sell or use it in public.

Confusion abounds
Response in the country is varied, with many people who are in favour of the verdict due to the medicinal benefits of marijuana, and others who are upset and disappointed about this. As Christians, we need to turn to Scripture when faced with such issues, rather than be led by the general public’s opinion.
Worldwide  we see more and more nations legalising marijuana for medicinal use; these include the following countries: Canada (2001), Australia (2016), France (2013), Romania (2013), Chile (2015), Czech Republic (2013), Colombia (2015), Jamaica, and many more. Uruguay was the first country in the world to legalise the cultivation and sales of marijuana for medicinal use as well as recreational drug in 2014.