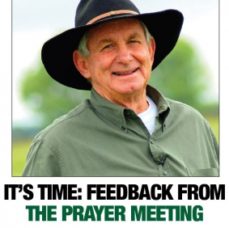 I was one of the privileged few that looked out over the vast grassy plain from a koppie just outside Bloemfontein on March 3, 2017. At that stage there was no budget, marketing plan, disaster management plan, or infrastructure in place and no one knew what we were planning. Uncle Angus let his gaze linger over the plains and asked, “Do you see the millions of people who will be here?” I immediately realised that this was the biggest step of faith that I ever saw anyone take, and also realised that what we were talking about, was humanly impossible. However, I had to practically learn that what seems impossible to me, is easy for God! Seven weeks later I stood on the same koppie and watched tearfully as more than one million people streamed in with one goal in mind  –  proclaiming Jesus as King of our lives and Prince of Peace over South Africa!