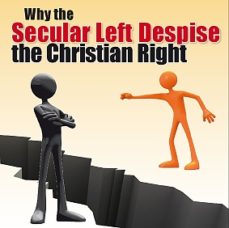 Why The Secular Left Despise The Christian Right

DIVIDING TRUTHS
What lies at the heart of the division between the Secular Left (Liberals) and the Christian Right is a debate over the nature of truth. Evangelical Christians believe that truth is objective and universal, which means that there is absolute Truth and it is found ultimately in one true God of the universe and His revelation given to us personally in Jesus Christ and the Bible. As a result of God having revealed absolute Truth to humanity, Evangelical Christians believe that lives and societies are best governed by adhering to the principles and guidelines that God has given. After all, when an omniscient (all-knowing) and loving God personally reveals Himself and the correct path for humans to follow, it only makes sense to hold fast to His guidance.
And it is the Evangelical insistence on adhering to God’s absolute Truth found in His Word that strokes the Secular Left’s ire.
To the contrary, the Secular Left is guided by a far different understanding of truth. For them, truth is no more than a social construction of reality. This means that reality has no inherent structure or meaning and there is no objective truth that humanity can discover. Instead, the Secular Left in our world has adopted a Post-Modern view of truth that declares that individuals and societies impose their own meaning and truth onto reality. Thus, for them, truth is relative. Truth is relative to individuals, to social groups, to cultures and to religions. And it is this Post-Modern view of truth that has created the wedge of animosity between the Secular Left and the Christian Right.
As a result of their denial of objective truth and their belief that truth is relative, the Secular Left has adopted a deconstructionist approach to history and traditional worldviews, and specifically towards the absolutes of Christianity. The common claim brought by the various proponents of the Secular Left’s agenda is that Christianity has historically led to violence, repression and conquest. They will list a long series of historical abuses as evidence.* As a result of these so-called ‘Christian’ abuses towards non-Christian people and cultures, the Secular Left’s Post-Modern worldview has determined that we must now highlight and give preference to the historically marginalised and mistreated. *Everyone, even the Evangelical Christians with whom they most identify these abuses, readily acknowledges the fact that historical abuses have taken place in the name of Christianity. What they fail to recognise, however, is that nowhere in God’s Word (once again, the ‘absolute’ for Christians) do you find the sanction for these historical abuses.

WE MUST REMAIN STEADFAST
It all boils down to the nature of truth. The Christian Right has remained steadfast in our adherence to the objective Truths and standards set forth in God’s Word. Thus, we oppose homosexual marriage, we stand on the side of the unborn and we believe that religions that promote the killing and suppression of those opposed to them are evil. Evangelicals are guided by God’s objective and absolute Truths and it is for this stance that the Secular Left despises us. Christian brothers and sisters, we must be vigorous in this cultural debate over the nature of Truth. The future of our country and our world is at stake. Our engagement in this debate is a thoroughly Christian pursuit. In fact, God’s Word admonishes us to “contend for the faith” and to contend for the Truth (Jude 3). At the same time, while we debate passionately, we must do so with a Christ-like “gentleness and respect” 1Pet 3:15. The way of the Master is to stand for the Truth in love. While we are right to defend the Truth, point out sinfulness and label right from wrong, we must do so with an attitude of humanity and love. If we do this, we will be faithful to the Truth and to the example of standing for the Truth left to us by our Master, Jesus Christ.