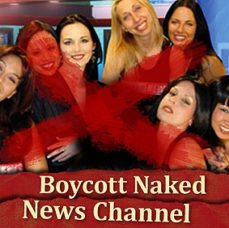 NakedNews is a cheap and puerile attempt at legitimising the sexual exploitation of women. Women, ostensibly reading the news and shedding their clothes primarily for the sexual gratification of men and no doubt curious children, cannot be considered newsworthy or an acceptable form of entertainment under any circumstances.
Utilising the school boy charade of a pornographic news bulletin to reinforce the destructive stereotype that women are mere sex objects should be a criminal offense in a country where the rape and sexual abuse of women and children are epidemic.
The fact that NakedNews will be available on cellphones for as little as R10 a week means millions of children will be easily exposed to pornographic images, which is a criminal offence in South Africa. FPI calls on government and the Film and Publication Board to urgently investigate NakedNews compliance with adult content regulations.
FPI is consulting with Church groups across the country and will not hesitate to call a national boycott of the sponsors of this appalling attack on the dignity of women. FPI calls for the prohibition of all pornographic images in the mass media and the strict regulation of its consumption in adult stores. The rights and dignity of women and children must be paramount in a civilised society. For more information contact: Errol Naidoo, Director of FPI on enaidoo@familypolicyinstitute.com  or 082 778 8818