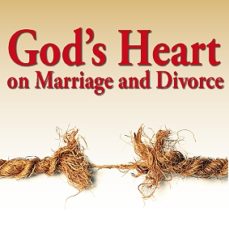 God’s Heart on Marriage and Divorce

In this fast changing world, believers must be made aware of how much of the world’s standards have crept into the Church… hence the reason for this series, “The Church Needs to Know”.

This article is based on the message: ‘God’s Heart on Marriage and Divorce’ from the series ‘The Church Needs to Know’ by Miki Hardy. To order the CD or DVD, contact CTMI Media on: 071 241 1016.