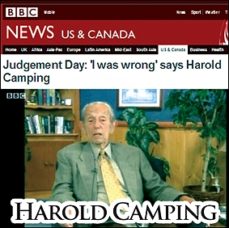 What Can Harold Camping Teach Us?
Not too many people in South Africa would have known of Harold Camping, until May 2011 that is. Since 2005, this radio preacher from the US has been boldly proclaiming that the Rapture would occur at 6pm 21st May, 2011. The press soon got hold of this and gave him a prominence he didn’t deserve.

I remember reading a book, ’88 reasons why the Rapture will be in 1988’ and I also remember throwing it in the bin in January 1989! The book apparently sold more than 4.5 million copies – can you believe it? Well, in similar vein, so Pastor Camping’s teachings also need to be binned. Actually, they should never have been aired to start with.

Camping’s methodology
I don’t have much sympathy for Pastor Harold but my heart goes out to the hundreds, perhaps thousands, of his followers. I wonder how they are feeling right now? I am sad to think of so many people being disillusioned and broken. But God works all things for the good of those who love Him (Rom 8:28) and so we need to identify what we can learn from this stupid non-event.

A major lesson concerns the way Camping interpreted the Bible. He used two methods of calculating the day he believed the true saints would be caught up to Heaven. The one involved a weird and convoluted number manipulation, the other was based on his reading of the Genesis account of the Great Flood. Genesis 7:4 records how God warned Noah that the flood would start in seven days time.

We are not to make assumptions
The Great Flood was a judgement on all humanity and so Camping reasoned that it must be a type (a sort of spiritual template), for the coming Judgement. This is Lesson One: we are not entitled to make assumptions like this unless the Bible actually makes the connection for us. Next, Camping arrived at a date for the Great Flood of 4990 BC. I don’t know how he arrived at this date. Bishop Ussher’s chronology placed the flood in 2348 BC while others place it at 2304 BC or even 2750 BC. All of these are more than 2 000 years from Camping’s date. Somehow Pastor Harold thought that Genesis 7:4 contained a hidden warning concerning a coming calamity. To unveil the meaning, he multiplied 7 x 1 000 and subtracted the 4990 BC date. He then added 1 to allow for the change from BC to AD and, hey presto, we have 2011! Why did he multiply by 1 000? He did so because 2 Peter 3:8 states that one day is like a thousand years to the Lord. Lesson Two: we can’t selectively apply one text, out of context, to another text. Genesis 7:4 also states that the flood would last for 40 days, so does this mean that the coming Judgement will last for 40 000 years?

Looking for ‘hidden’ meanings
So much for the year, now what about the day? Well, according to Camping, the Great Flood started on 17th of the Hebrew month Iyyar which equates to 21st May in the year 2011. I presume he chose 6pm as the ‘lift off’ time because the ancient Hebrew day started at 6pm on the previous evening…but that would make it the 22nd May…!

Harold Camping’s interpretive methods come from a belief that the Bible needs to be interpreted allegorically. Preachers in the Middle Ages used this method extensively because they, like Camping, thought that every text in the Bible contained a hidden meaning. They taught that these veiled meanings could be revealed by relating the text to other texts, irrespective of context, or simply by applying ‘Spirit-led imagination’.

Interpreting Scripture correctly
Unfortunately, Camping is not the only one who interprets the Bible in this mystical way. Several years ago I heard the leader of a major church group preach on how the twelve gates in the walls of ancient Jerusalem each stood for a particular church age. He went around the gates in a clockwise direction and concluded that we were currently in the age signified by the Dung Gate – phew!

Some texts may have more than one meaning, but any ‘deeper’ meanings must be governed by the meaning the original readers/listeners would have attributed to the text. There are some exceptions to this in the Bible itself  (for instance the 1 Corinthians 2:16 use of Isaiah 40:13) but the general principle is sound and will guard us from misleading and irresponsible theology.