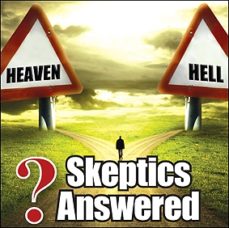 Skeptics Answered: How Can Hell & Judgement Be Trait of a Loving God?
The doctrine of hell and the wrath of God has never been popular and recently a big controversy erupted worldwide with the release of Rob Bell’s book on the subject matter. (‘Love Wins’ see JOY! June issue).

According to surveys a large majority of Evangelical Christians believe more or less, that people of other religions and faiths will go to Heaven, regardless of what their church and theologians may argue. This is worrying because born-again, Bible believing Christians are disregarding the Word of God, in favour of their own opinions.

Creating a more ‘palatable’ Gospel
AW Tozer (1897 – 1963) noted the following:   “It would be impossible to overemphasise the importance of sound doctrine in the life of a Christian. Right thinking about all spiritual matters is imperative if we would have right living. As men do not gather grapes of thorns nor figs of thistles, sound character does not grow out of unsound teaching.”
Bell (and others) repeatedly ask “How could a loving God be wrathful toward people He created?” This is a valid question, but it is incomplete; we need to look at what the Word of God says, not what our humanist thinking dictates we ask. The problem with Bell’s book and Liberal Christianity is that it creates a gospel that is a little more palatable and a “better story” as Bell puts it.

Talking about hell is an act of grace
If we look at the number of times Jesus spoke of hell, judgement and the wrath of God, it is alarming that the Church is nervous to speak about it. Judgement, wrath and hell are widely misunderstood doctrines that come under fire frequently, yet it is an act of grace to preach on hell. It is our duty as Christians to speak about the reality of hell and eternal judgement.

The intent of liberal Christianity
When I warn my boys about something that is dangerous for them (like playing with fire), and in that I spoil their fun, I am not being harsh. I am being loving and gracious toward them. Preaching about hell shows that we care about people. We speak about hell precisely because God wants everyone to be saved. Hell leads people to the Cross.

Richard Niebuhr a leading 20th Century theologian said that “liberal theology removes the critical elements out of our Gospel. It says that essentially, ‘a God without wrath, brought men without sin, into a Kingdom without judgement, through the ministrations of a Christ without a Cross.”

The Bible is clear
We instinctively tend towards understanding the Bible in the way that justifies our actions and attitudes. But we cannot isolate God’s attributes. Just as one can’t separate eggs and sugar from a baked cake, you cannot accept some of God’s attributes and not others. You can’t have God’s love without His holiness; His mercy without His justice.

The Bible is clear: “But because of your hard and impenitent heart you are storing up wrath for yourself on the day of wrath when God’s righteous judgement will be revealed. He will render to each one according to His works:  to those who by patience seek for glory and honour and immortality, He will give eternal life; but for those who are self-seeking and do not obey the truth, but obey unrighteousness, there will be wrath and fury. There will be tribulation and distress for every human being who does evil…but glory and honour and peace for everyone who does good…For God shows no partiality.”  Rom 2:5-11.

The Lord’s anger is holy, justified and fair. The language the Bible uses about hell and God’s wrath is harsh and hard.  Liberal theologians would have us diminish this language because it does not ‘fit’ with their picture of God. People don’t like the idea of an angry God, because they see angry men and teachers and they think it’s the same thing.

Man is to die once
There is a Day of Reckoning coming and a just and righteous God will judge us fairly – whether we want to accept this or not. Liberal theologians (like Rob Bell in his book) would like to think that after you die you get a second chance – that “love  wins in the end.”  The Bible is clear on what will happen when we die and the language the Bible uses is direct: “It is appointed for man to die once, and after that comes Judgement.” Heb 9:27.

God’s holiness demands His wrath
“The times of ignorance God overlooked, but now He commands all people everywhere to repent, because He has fixed a day on which He will judge the world in righteousness by a Man whom He has appointed; and of this He has given assurance to all by raising Him from the dead.” Acts 17:30

[Interestingly Bell does not use these or any other commonly referred to Scriptures on hell and wrath in his book]. The wrath of God is His eternal detestation of all things unrighteous. He detests our sin and hates it with a passion. God has made Himself  known to every person who has ever lived. We may not know how He has done this, but the fact is, God has done it. The Bible assures us everyone will hear the truth and no one will have an excuse. That is what we believe, even if we don’t understand how it works. (Rom 1:18-20). If we believe in a God who is holy and completely righteous, then by virtue of His very nature and character, unholiness goes against all that He is. And if He just keeps quiet about sin and injustice, then what kind of God is He?

What Bell should have asked in his book is, “How can God be holy and not display His devastating disapproval of sin?” It would just be lip service if God did nothing. We don’t respect a government that leaves murder unpunished, or a husband who says he loves his wife but treats her badly – yet the world wants a God who is fair, but doesn’t deal with sin.

Why should we rejoice God’s wrath?
1. It preserves His God-ness. He is angry with anyone who rebels against His authority. This is not some insecure reaction. It’s just the reality that God is God and He will have His way
2. It keeps us safe from the effects of sin. Understanding God’s wrath should scare us and make us hate sin too. No one would want to live in a society where sin is unpunished – that would be hell. A place devoid of God and all His influence.
3. It’s a catalyst for our appreciation of God’s great mercy. When we understand His wrath, we appreciate His grace in affording us shelter in Christ from that wrath. A father loves his children and wants to protect them, but he also lets them face the consequences of their choices so that they may grow and mature. God is a Father: People who do not understand the wrath of God cheapen the grace and mercy of God and turn it into a commodity that allows them to live sinful lives.

God has given us hope in Christ
It is from God’s wrath that we are saved (despite what Bell and others may say). This is  a concept difficult to reconcile for those who are in search of a cushy God of their own design. The reality is we are rescued from God’s wrath by the self-giving love and sacrifice of Jesus on the Cross.  “But God shows His love for us in that while we were still sinners, Christ died for us. Since, therefore, we have now been justified by His blood, much more shall we be saved by Him from the wrath of God.” Rom. 5:8-9.

Will people appreciate God’s mercy if they did not know what His wrath and judgement is like? Look at it in the context of a father and child: if my child makes a mistake and I choose not to punish him for that, how could he appreciate that grace if he had never been punished before when he deliberately disobeyed me?

Hell is a real place
Those who try to negate the Word of God, turn Jesus into a liar. Though people say we see hell on earth, and we do see terrible situations of poverty, abuse, violence and injustice – this is not the true hell that the Bible speaks of – regardless of what people would like to believe. If hell is not a real place, it mocks the Cross and Jesus’ sacrifice. The difference between the so called hell on earth and the real hell awaiting is that in the real (true) hell there will be not one person who will think: “I don’t deserve this.”

The point is this – if people knew what hell really is, they wouldn’t choose it. They have been seduced by sin.

How can a loving God send people to hell?
Well that is the very definition of love – to get to hell, someone must have rejected God’s sacrifice for their sin, reject the Crucified Son of God who died for them, reject the Spirit who draws them to the Father.

Is God intolerant? By no means – He gives all a fair chance in receiving Him. Should God be more tolerant? Just like a father is not tolerant of a predator to his kids; a rapist of his daughter; God separates sin from Himself and from His children. If you want to fight for a ‘tolerant’ God then we should stop sentencing murderers and rapists. Somehow people have found it acceptable to think love means no boundaries or consequences. Is it loving to allow our kids to do exactly what they want? Is it loving to let them be exposed to that which can harm them? If we understand God’s holiness and our sinfulness, we cannot argue about God’s commitment to righteousness and justice.

By displaying His wrath to us, He displays His mercy. Without that, I don’t know if anyone would choose Him. This ‘love’ would just be an idea…it would require no decision. There is only one way to God – through Jesus; but there are many ways to Jesus and God gives each a fair chance.