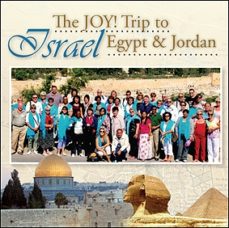 The JOY! Tour to Egypt, Jordan and Israel
We all arrived at OR Tambo airport a little nervous and very excited for the 11 day tour that was to commence. What would the political situation be like in Egypt and would the Israeli Holy Land live up to expectations?

Jannie du Plessis (Owner of Sure Makro Travel) waved us goodbye, and as family and friends gathered to see off the Gautengers, the rest of us (from all over South Africa including Cape Town, Bloem and Durban) waited in line with our passports. After quick introductions, we boarded our Egypt Air flight and jetted off for sunny Cairo. Upon landing we met Michael (of Nawas Travel), the most professional chaperone a tour group could wish for! Michael took care of all our arrangements and introduced us to Wahid – our tour guide in Egypt. The group was itching to see the pyramids, so  our bus driver   expertly navigated the chaotic streets of Cairo.

A day to remember in Cairo
As we approached the pyramids (which tower over the city and surrounding architecture), tour members quickly grabbed their JOY! caps and blue pashminas to shade them from the beating sun.

‘Oohs’ and ‘Ahs’ resounded as we neared the base of these colossal structures (built as burial monuments for the Pharaohs by slaves). Cameras were whipped out for photo opportunities, especially when local herdsmen came running with offers for camel rides. Most of the group jumped at the opportunity to experience transport the ‘Biblical way’ and Vuyelwa was all smiles when her camel hoisted her up for a ride. Shrieks could be heard throughout the barren land as Jenny and Lana posed for pics. Judging from the smiles on their faces, Jimmy and Cathy also enjoyed themselves!

Next stop was the Sphinx, which was a lot smaller in real life (especially according to Elsabé who spent ages staring at the stone statue). A qualified archaeologist, Wahid was excited for the Egyptian Museum, which houses some of the world’s most priceless artefacts. Some tour members, like Etha, weren’t up for the museum tour (it had been a very long day) and instead chose to relax by the pool at our hotel and soak up the sun!

Standing in Tahir Square
Freddie and Greer couldn’t wait to see the Museum, as it is located next to Tahir Square (where the January revolution took place). Seeing the burnt buildings and standing at the exact spot where over a million people gathered in protest months earlier, was a historic moment for me – a political journalist by study! The next day it was off to Jordan, a beautiful country with very friendly people. First up was Mount Nebo, the area Moses viewed the promised land from and is believed to be buried near. Seeing the valleys and hills of the promised land from Moses’s vantage point was a highlight for everyone, especially Hennie and Erna who listened intently as Kevin and Di preached a quick sermon.

Exploring the country of Jordan
Next was the spot where people believe Jesus was baptised (on the Jordan side of the Jordan river), and though it was muddy, Kwena couldn’t resist putting her feet in this special water. After some shopping (which  fashion boutique owner Gilda and her husband Alvaro seemed to enjoy), we retired to our five star hotel.

After dinner, we had a devotional meeting and everyone was given an opportunity to share their hopes for the tour. Friends Debby and Jane spoke of their life-long dream, as well as Tina and Eugenie, who had signed on at the last moment and were so excited to join the JOY! team.

Crossing over to the promised land
The next day we crossed the border into Israel and the group was buzzing with excitement for the baptism service that was to take place. Selma and André were rearing to go, and went into the water full of expectation. Kevin gave each person a word before lowering them into the water, and the smiles on Paul and Elsie’s faces were priceless! Dalene and the bubbly Ranjini  kindly helped me lead the praise and worship, as it took an hour and a half to get through everyone!

A lifetime of memories
There were so many places we visited on this trip (and not enough space to mention them all), but a few other special highlights included worship on the Sea of Galilee. Thomas and Elaine really enjoyed this, and Memory seemed to be in her element, taking in the quiet splendour of the lake that our Lord spent so much time on.

Jeanette loved floating in the Dead Sea and Johnny, our fantastic tour guide, enjoyed the interview I conducted with him on the long drive up to Jerusalem. Our time at the Garden of Gethsemane was very special, as we considered Jesus and what He endured the night before His crucifixion. The group prayed for the sick, and Phuti was instantly healed of a long term shoulder injury. We also prayed for Era and Wilco, trusting that the Lord is going to do a miracle in their lives. Pierre and Zelda were moved at the Garden Tomb where we had communion and worship and Heide and Vernon enjoyed touring the bustling streets of the Old City.

The end of a special tour
Petra was a significant highlight; Erin (our editor) couldn’t stop talking about the breathtaking scenery, and Sanietha (who had attended a previous JOY! tour) loved this extra excursion in the desert. Petro and Anna chatted to the local people, even praying over Muslim babies whilst Hermien was focussed on ‘Zorro’ the dashing Arabian horse rider who followed the group around. Sean and Cindy took thousands of photos and have a fantastic collection of memories to look back on, and I will never forget my 45 new friends.Every Christian should try and visit Israel. JOY! will be hosting more tours, but we also encourage you to consult the companies that advertise with us, as they regularly take trips abroad.

JOIN OUR JOY! TRAVEL CLUB & SEE THE WORLD!
Want to holiday with Christians? Join our travel family with Cruises, Pilgrimages to Israel and 4×4 trips. Sign up today for notifications and book your place on our next ISRAEL tour happening soon! Call 021 852 4061 or jackie@joymag.co.za for more info.