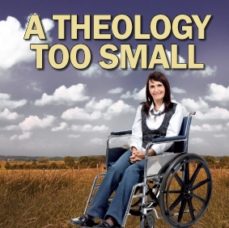 A Theology Too Small
In the 1980’s, I ventured to hold a campaign in Birmingham, England. This was the first crusade outside of Africa. Then, early in 1983, another invitation came to hold a crusade in the city of Perth. Our friends in that city had acquired the use of the 8 000-seat entertainment centre.

The first night the hall was packed. The local news team arrived to find a story. “What will you do here tonight, Lord?”

Proclaiming a miracle
My eyes were drawn to the far right side of the auditorium where a lady in a blue vest and jeans sat in a wheelchair. The Lord said to me, “Tonight I will heal that woman there.” I took the microphone and announced, with great excitement, “Today a great miracle is going to happen here. I pointed to the woman in the blue jeans, “That woman over there is going to be healed, and she is coming out of her wheelchair.” The local TV news team took eager notice of it.

When I made this announcement, I hoped to stir up an expectation in the crowd – I had learned that this can help build an atmosphere of faith. In the Gospel of Matthew and Mark, we read that Jesus’ miracle-working power was limited by the unbelief of the people in Nazareth. Certainly, if a lack of faith can limit Jesus’ power to do miracles, it can limit mine. If Jesus credited miracles of healing to the faith of a sick person, so must I. This was my theology of faith in a nutshell.

The faith of others can heal you
As I made my bold announcement it did not seem to build an atmosphere of faith in the room. In fact, the opposite happened. The woman did not receive my announcement as good news. She ducked her head under her arms and tried to hide herself. I must have sounded to those people like an insensitive South African preacher who had presumed upon a poor woman’s illness. The crowd did not respond positively. What I did not know was that this woman had merely come as an invited guest. She was not religious at all. She had no knowledge or expectation of healing. It turns out the woman had a degenerative disease called ‘brittle bone’ disease. To stand up would cause her bones to crack.

As I waited for the time for preaching, I said within myself, “Oh Lord, she doesn’t have faith. How’s this going to work?”

In a moment the Holy Spirit spoke back to me, “Today it’s not her faith, it’s your faith. You are going to see a great miracle.”

Immediately, my mind raced through the Scriptures. Could I find an example in the New Testament that would demonstrate that Jesus healed someone based on the faith of another?

Feeling like you are all alone…
Suddenly it came to me: the story of the paralysed man who was let down through the roof to Jesus. In the story, the man shows no faith of his own. His friends take him to Jesus. They cannot get into the house where He is teaching, but they are so sure of Jesus’ power to heal that they remove the roofing material, and let the man down next to the Lord inside the house.

The Bible says that when Jesus saw their faith, He forgave the man’s sins and healed his body. When I got up to preach, I preached to myself as much as to anyone else. I built up my own faith by this Bible story so that when the time came to pray for the woman, I would not expect her faith to be present.

At the end of the sermon, I announced that I would now pray for the woman in the wheelchair, as I had promised. On the platform with me was a pastor friend from South Africa. He whispered, “Reinhard, you’re on your own now.” By this he meant that he had seen the woman’s lack of faith, and was not going to share my embarrassment. The TV crew got in position to record the event. “What is your name?” I asked. “I am Mrs McKelt” She replied. “Mrs McKelt, God has told me that you are going to be healed today,” I told her.

A miracle healing
As I prepared to lay my hands on her I felt a tap on my shoulder. It was my South African friend. “One shall chase a thousand,” he whispered, “but two can chase ten thousand.” He was speaking now of joining his faith with mine in this prayer.

I would have prayed without him, but I was glad to see him there. I laid my hands on her head and commanded, “In the Name of Jesus, get up and walk!”

Signs and wonders
Slowly, unsteadily, she stood to her feet. The people seemed to be holding their breath. The news team was filming away. “Now walk,” I said. She began to walk like Frankenstein – clump, clump, clump, across the floor. She moved like she was wearing lead boots. “Run in Jesus’ Name!” I shouted. “Run!” Suddenly, she took off like a shot. She began running, and screaming, and laughing, and jumping.

The news team ran a story. The next day they did a follow up taking their camera to the house. When she answered the door the camera revealed her wheelchair folded up in a corner of the entryway.

Don’t put God in a box
Years later, Mrs McKelt attended a Christ for all Nations partners banquet in Perth. She came to show me that she was completely healed. She was a child of God set free. Through Mrs McKelt, I learned to be careful about putting God in a theological box. Today, when I pray for someone and that person is not healed, I do not blame the person (in my mind) for a lack of faith.

The longer I live, the less I pretend to know about the mind of God. I do not know why some are healed when others are not. I only know that sometimes it is the gift of another’s faith that can make a person whole.