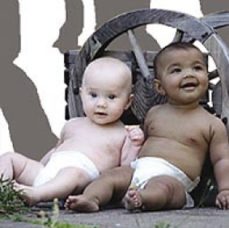 Believe it or not, these two beautiful little girls are twins. Born in April 2005 in Nottingham, UK, blue – eyed Remee (on the left in main photo) would be called ‘white’, while many would label her brown – eyed sister, Kian as ‘black’.

The twins soon became the focus of much media attention. News reports described how both of their parents, Kylie Hodgson and Remi Horder, have white mothers and black fathers. These two little girls help answer one of the questions that has troubled many people about the Bible. If there was just one man and one woman at the beginning then where did all the ‘races’ come from, with their different skin colours? Remee and Kian prove that it is simply a matter of genetics – with the right genes, all the different complexions can appear in one generation. So if Adam and Eve had a middle-brown complexion due to a mixture of ‘light’ and ‘dark’ genetic information, similar to Remee and Kian’s parents, all shades from the darkest through to the lightest could be accounted for in their children and future generations.

Kian and Remee also illustrate the Biblical truth that we are all related – we all belong to the same family through Adam and Eve, and through Noah and his family too, just as the Bible says.

Establishing a little individuality is a challenge faced by most twins. But nature has already given Alicia and Jasmin Singerl a helping hand. Many do a double take when they realise Alicia is black while Jasmin is white and they are sisters.  Experts say the chance of twins being born with such different physical characteristics is about a million to one.  The Australian sisters, who were conceived naturally,  live with their parents in Burpengary, north of Brisbane.
Their mother, Natasha Knight, 35, is of mixed-race Jamaican-English heritage, while their father Michael Singerl, 34, is a white German.   “When they were born you could see there was a colour difference straight away. We couldn’t believe it.  Alicia’s eyes were brown and her hair was dark. Jasmin’s eyes were blue and her hair was white – you could hardly see her hair or her eyebrows.  Someone even asked me if I was sure there wasn’t a mix-up at the hospital. But there was no mix-up – they are my girls and they are both so beautiful.”

“When we go out people stop and ask if they are twins. Other people will look but not say anything. Maybe they think I am babysitting one of them. It will be interesting when they go to school and they will probably wonder why they look so different from each other. I guess the easiest way to explain it will be to say one took after Mum, one took after Dad.”

Genetics experts say that in most cases a mixed-race woman’s eggs will be a mixture of genes for both black and white skin.  However, more rarely, the eggs may contain genes for predominantly one skin colour.
In this case, there were two such eggs, one with dark pigmentation genes and one fair.  Clinical geneticist Dr Stephen Withers said the likelihood of a mixed-race woman having eggs that were predominantly for one skin colour was rare enough, let alone producing two of them, resulting in twins.

“It’s probably a million to one,” he said. “It’s a terrifically rare phenomenon.”