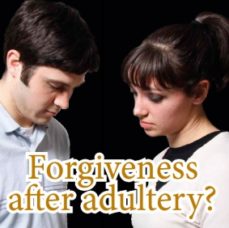 Her husband had betrayed his vows. He had had a fling with a woman he worked with, and now he realised what he must do. To confess his wrong doing to his wife whom he really loved was the hardest thing he had ever done. He knew what he had done was stupid and selfish. And now he had to face the music. Would she forgive him? He wasn’t sure. Of course, she was shocked. She knew that this happened to other women, but she never thought that her husband was capable of doing this to her. Besides, there were four children – two boys and two girls. Something inside kept saying, “Throw the bum out. He violated a sacred trust. He betrayed you. How can you ever be sure that he won’t do it again?” This wife, heartbroken, turned to an older woman, a trusted friend – “What should I do?” For years Margaret had counselled and worked with women. She had seen the effects of broken homes, the bitterness of vengeance and the loneliness of estrangement. She had also seen restoration and healing which can come when someone seeks forgiveness, both from God and from a mate. Margaret tried to help her see the implications of either choice. “Honey,” she said. “You have four children to think of as well–not just yourself. If I were you, I would forgive him.” It was a decision which was not easy. Of course it took time for the relationship to mend and heal. Bones can be set in a matter of a few minutes but the pain slowly subsides. And the therapy which follows gradually strengthens the hurting limb. So it is with the process of forgiveness. Saying, “I forgive you” doesn’t automatically take away the momentary feeling of panic when your husband isn’t home on time, or the phone rings and you hear a woman’s voice which you do not recognise asking if your husband is at home. The wife who faced the dilemma is now a grandmother and her children have married and have children of their own. She doesn’t traipse from seminar to seminar telling how she learned to forgive. No. Four people will carry that dark thought to their graves with them, but not any of their children. The incident was dealt with and gradually the grace of God brought restoration and healing. God not only demonstrated forgiveness in sending His Son, but He also commanded us to forgive just as He forgave our sins. Is forgiveness good medicine for the hurts of the world? There is none better. When we have been hurt, it is hard to think of the implications – the manner in which others are affected – because our pain becomes paramount. The reality is that when children grow up in a home without two parents, the chances of their marriages coming apart is statistically greater than when we learn to forgive and to move on.

Forgive as Christ forgave us
Only a fool would suggest that forgiveness is an easy matter. It isn’t. But neither is the feel of a scalpel without anesthesia, or the sharp wrench of a broken bone as the doctor sets the fracture so healing can take place. Separation from the one who has hurt you may make you feel vindicated, but it leaves an emptiness and an anger which doesn’t go away. A final thought: When you are uncertain about forgiving someone, may I suggest that you do what the woman I described did? Go to a mature, godly person who will help you see the whole picture. If you look long enough, you’ll find someone who will tell you exactly what you want to hear. But wise counsel is a gift from God. It rarely is what you want to hear, but a generation later, you’ll be very, very glad you took the path less travelled. Of that, I am certain. For further reading: Ephesians 4.