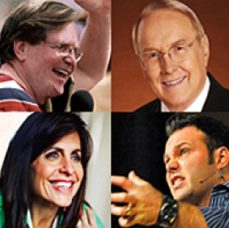 Top 10 Most Influential Christian Leaders of 2010
Christian Telegraph the largest Christian Internet ministry in the Russian language and news agency has named their 2010 ministers of the year. They say that they have been selected “because of their vast influence on Christianity.”

Evangelist of the year – Reinhard Bonnke  The legendary evangelist has brought millions of people in Africa to the Lord. Even as Reinhard is in his 70’s, his passion for Jesus is still going strong and he desires to awaken Europe, which has been spiritually asleep, to the saving knowledge of Jesus Christ. In addition to massive crusades, he views the Internet as a great tool for evangelism and updates his Facebook page every day. Reinhard has also prepared a successor for himself.

Writer of the year – Lisa Bevere   Being an international speaker, author of many bestsellers and TV show hostess, Lisa Bevere is one of the few who encourages women all around the world to raise their voices and change this world for the better.

Missionary of the year – Jaerock Lee  This pastor knows that the lives of Christians are to be holy and should be empowered by the Holy Spirit. He founded Manmin Church, a mega-church in Seoul, South Korea, and works to bring revival and the Gospel to the most remote corners of the world. Just a few of the other countries he has impacted are Israel, Peru, Estonia, the United States, India and countries in Africa.

Diplomat of the year – Rick Warren  The pastor of the mega-church, Saddleback, was named one of the most popular and influential users of Twitter. Rick Warren is one of the few pastors who publicly speaks with influential governmental officials. In 2010 he interviewed former United States of America president George W. Bush in his church.

Philanthropist of the year – Franklin Graham  Franklin Graham has dedicated his life to preaching the Gospel and to helping those who are in desperate situations, including economically and medically. He is the President of the worldwide relief organisation Samaritan’s Purse and the President of the Billy Graham Evangelistic Association. Samaritan’s Purse is working in more than 100 countries.

Leader of the year – James Davis  James Davis is the co-founder of the growing coalition of ministries and denominations called Billion Soul Network. It includes more than 350 000 churches. James is a gifted leader and his goal is to strengthen relations between pastors in order to plant five million churches and bring one billion people to Christ.

Reformer of the year – Mark Driscoll  He is the Pastor of Mars Hill Church in Seattle, Washington and is working to reform the approach of having church and being a community of believers. He is using the latest technologies to do that. Mars Hill Church has created its own internet network, which is a virtual community that helps church members build strong relationships.

Broadcaster of the year – James Dobson  After more than 30 years of ministry and, as the leader of one of the most influential pro-family organisations in the US, Focus on the Family, James Dobson left the ministry that he founded and started a new radio programme called Family Talk. The focus of the new programme is to strengthen the institution of family, which James says is the foundation of a strong society.

Strategist of the year – Leonard Sweet  Leonard Sweet is a historian of the American culture, futurist who sees the trends in the society that are unnoticed by others and a writer. Leonard is also a consultant to many churches and develops strategies to fulfil the Great Commission in the digital age of the 21st Century.