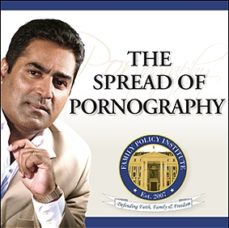 The Spread of Pornography
The rapid and unrestrained spread of pornography within society must rank as the most insidious threat against marriage and the family since the sexual revolution of the Sixties. The relative ease with which one can access hard-core sexually explicit images is unprecedented in South Africa’s history. The internet serves as the primary channel to access pornography. However, widespread use of smart phones and other hand held devices has made pornography more easily available to men, women and children as young as eight years old. The targeting of minors by smut merchants has reached epidemic proportions. More and younger children are downloading hard-core pornography to their cell phones. This disturbing trend has quickly descended into a grotesque fad called ‘sexting’, in which children record video clips of themselves engaging in sexual activity and share it with friends.

Often it is a false coping mechanism for the individual and is a false love. It is a sick substitute for God’s love and is actually idol worship. It is a spiritual, emotional and psychological poison that leads to death.

A serious threat
Addiction to pornography has become such a serious threat to society, it is often referred to as the ‘new crack’. Millions of marriages are destroyed worldwide as a result of pornography addictions and the resulting downward spiral into the seedy world of sexual depravity, perversion and uncontrolled obsessions. Research indicates most men who use prostitutes are married men and the primary reason for this abnormality is their addiction to pornography.

A secret sin
Research indicates the pornography plague is pervasive both inside and outside the Church. David Blythe, author of ‘Secret in the Pew – Pornography in the Lives of Christian Men’ says: “There are secrets sitting in the pews of our churches. This secret is a hidden lifestyle of sexual preoccupation and perversion within the lives of Christian men. It is fuelled by regular consumption of one of the most destructive forces of our time – pornography. Pornography has created such a stronghold within the Body of Christ that many have become neutralised from being of any kind of force for the Kingdom of God.