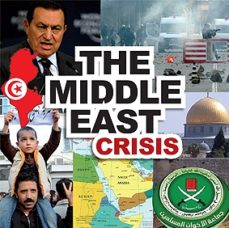 The Middle East Crisis
The tidal waves of protests and riots convulsing capitals throughout the Arab world herald a seismic shift in world politics. More than a million demonstrators on the streets of a single capital, day after day, calling for the resignation of authoritarian leaders, some of whom have been in power for decades, has created consternation, not only in the Middle East, but throughout the world.

Now in 2011 it was  the first Arab country to remove a dictator without external help. Exploding public anger at blatant corruption and sharp rises in prices sparked initial protests in December. In January, the sudden flight of President Ben Ali to Saudi Arabia, after 23 years of dictatorial rule, made possible the return from exile in London of Rachid Ghannouchi to assume interim control of the troubled country. However, as the interim government consists of numerous ministers from the previous regime, and as the economic crises which sparked the discontent in the first place remain, further instability can be expected.

Although Tunisia has no history of Islamic fundamentalism, radical groups such as the Muslim Brotherhood are attempting to exploit the instability and hijack the popular revolution to turn Tunisia from a mostly secular state into a radical Islamicist regime.

The Battle for Egypt
The relative political stability under President Hosni Mubarak for over 29 years has come to an abrupt end. Mubarak’s rule has been mostly secular. However Islamicist groups have grown greatly in strength in the past 20 years despite harsh suppression from Mubarak’s government.

Egypt is home to one of the most ancient civilisations in the world and is arguably the most important Arab country – it has the largest population of any Arab country, 84 million. Islam is the state religion. There are however over 10 million Christians, mostly Coptic Orthodox, making up 12% of the population of Egypt.

For over 1 000 years Egypt was a majority Christian population, even after the Arab Muslim conquest in AD 640. Incredibly the Egyptian Church has survived 14 centuries of Islamic discrimination and persecution. Violence against Christians in Egypt has escalated sharply over the last ten years.

An Islamicist awakening
An Islamicist takeover in Egypt would be a massive crisis because the country has so much influence in the peace process with the state of Israel. Egypt is America’s key regional ally and was the first Arab state to make peace with Israel. The vital Suez Canal is controlled by Egypt. Iran severed diplomatic ties with Egypt after the 1979 Revolution because of Cairo’s peace treaty with Israel. The Ayatollah Ali Khamenei has compared the turmoil in Cairo to the period before the Iranian Islamic Revolution of 1979.

The uprising in Egypt has been described by Iranians as “an Islamic Awakening” which could lead to the establishment of an Islamicist Middle East led by Iran, dedicated to the extermination of the state of Israel.

Considering that these Christians come from communities which have survived many centuries of Islamic persecution, only to be uprooted today, shows just how severe this new wave of ruthless persecution by radical Muslims has become.

An increase of support for radicals
With the crisis escalating throughout the Arab world, Western governments are facing a conundrum of their own making. For many years Western governments and media have repeated the liberal mantra that the vast majority of Muslims are moderate and against terrorism. This is now being shown to be a self-deceiving fantasy.

The proposed solution by Western liberals to virtually any problem worldwide, that of ballot box democracy, is plainly not going to work in the Muslim Middle East. After the American military succeeded in toppling Saddam Hussein’s dictatorship in Iraq and making possible the first democratic elections in that country, the result was more radical Islamicists in power and far more severe persecution of Christians than had ever been experienced in Iraq before.

Diametrically opposed
In 2003 American President George W. Bush declared: “Are the peoples of the Middle East somehow beyond the reach of liberty? Are they alone never to know freedom..?” The religion of Islam does seem to be diametrically opposed to the Western world’s concept of freedom. Either Islam will die or freedom will die. The Islamic concept of freedom bears no resemblance to the Western understanding of freedom. Ibn Arabi, a noted Islamic scholar, defined freedom as: being “perfect slavery” to Allah. The Muslim definition of freedom is submission and subjection to Shari’a law.

A 2010 Pew Opinion Survey and University of Maryland/World Opinion.org survey have found that 84% of Egyptians favour the death penalty for “apostates” (those who choose to leave Islam). The fact that 90% favour ‘Freedom of Religion’ is not considered a contradiction in Muslim eyes, because by freedom of religion they mean submission to Islam. To Westerners freedom means the exact opposite. Clearly we are not talking the same language.

A clear and present danger
The danger of the Radical Muslim Brotherhood, one of the most virulent Islamic terrorist organisations in the world, hijacking the popular revolution in Egypt to turn that country into an Iranian style Islamicist state dedicated to the annihilation of the state of Israel and exporting radical Islam worldwide, is a clear and present danger. Egyptian government leaders have publicly declared their astonishment at how American President Obama is betraying them into the hands of the radical Muslim Brotherhood. Though bureaucracy and corruption abound, Mubarak has been a staunch US ally and a recipient of billions of dollars in military aid. His administration has long been considered the major stabilising force in the volatile Arab world.

Despite its radical statements and bloody track record, numerous Western government leaders have gone out of their way to claim that the Muslim Brotherhood is “a force for moderation” and neither violent nor extreme!
An Anti-Western revolution
The leader of Jordan’s Muslim Brotherhood, Hammam Saeed, warned that the revolution in Egypt would spread across the Middle East until the Arabs succeed in toppling all leaders allied with America and Europe.

The balance of power in the Middle East could be severely shaken and dramatically re-aligned. With the White House giving support to the Muslim Brotherhood, Israel is preparing for the worst. After years of enduring Iranian-supplied kassam rocket attacks from Gaza, Israel now fears that their cities and towns could be hit with the full brunt of the Iranian arsenal.

A clash of civilisations
Since the 1978 Camp David Peace Accord between Israel and Egypt, US taxpayers have provided US$ 63,7 billion dollars in aid to Egypt alone. The state of Israel now fears that Egypt could become part of the Iranian pact in the Middle East along with Hamas, Hezbollah and other terrorist groups. A Muslim Brotherhood take over would herald the imposition of Shari’a law, a drastic increase in persecution of Christians and open hostility with the state of Israel. Israeli Prime Minister Benjamin Netanyahu warned the Knesset that the future of Egypt and that of Egypt’s ties with Israel hang in the balance: “We have two separate worlds here, two opposites, two worldviews; that of the free democratic world and that of the radical world. Which one of them will prevail in Egypt in the future? The answer to this question is crucial to the future of Egypt, of the region and to our own future in Israel.”

Democratic experiments in the Arab world
To many Westerners who know little about Islam or the Middle East, the news of mass protests against dictatorships and calls for democracy would sound like a good development. However, in Arab countries where some measure of democracy has been introduced, however tentatively, it is invariably the radical Islamicists who come to power.

When Bahrain held elections, the Islamicist parties won most of the seats. When elections were held in Gaza, the radical Islamicist terror group, Hamas, received most of the votes. The Muslim Brotherhood in Egypt is confident that the majority of Egyptians will vote for them in a future election.

Islamicist caliphate
Those who understand Islam and the Middle East are warning that democracy will bring change, but it would be in the form of the worst nightmare – an Islamicist crescent spreading from Pakistan in the East to Morocco in the West. A pan-Arabian Caliphate, where the word Islamicist would no longer just be shorthand for terrorist, but describe official government policy, even in capitals such as Cairo.

If European and American officials are worried about developments in the Middle East, one can only imagine what politicians and military commanders in the state of Israel are thinking. The Muslim Brotherhood have expressed their intent to seize power. They have made it clear that one of their first actions would be to tear up the 1979 Egyptian-Israel Peace Treaty. That alone would hurtle this troubled region into even more deadly instability.

An urgent call to prayer
The fundamental, and seemingly irreconcilable, differences between most Israelis and Arabs, means that any outbreak of serious conflict could easily embroil most neighbouring countries, including Lebanon, Syria and Lybia as seen recently. Many feel that such a war is almost inevitable. Christians need to be praying through Operation World – The Definitive Prayer Guide to Every Nation.

We need to be particularly focusing the prayers of our congregations on Christians under pressure in the Middle East, and for increased Christian missionary efforts to reach Muslims for Christ. “Not by might nor by power, but by My Spirit says the Lord Almighty” Zech 4:6