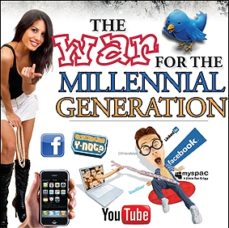 The War for the Millennial Generation
It wasn’t easy for a guy to find pornography when I was a teenager. I remember giving into the temptation to buy a ‘Hustler’ magazine when I was in high school. Inside the store I paced back and forth near the magazine rack for at least half an hour. My palms were sweaty, my heart was racing. I finally walked to the front of the store, put the magazine face down on the counter and avoided eye contact with the cashier as I forked over the cash.

Feeling convicted of sin
I rushed inside the shop with my head down so no one would see me on the street. Then, when I saw the graphic images on the magazines that lined the wall, I almost fainted from a combination of adrenaline, fear, nausea and guilt. I bought a thin magazine that didn’t cost much and literally ran out of that place.

As I was leaving I caught a glimpse of a bumper sticker I had put on my car a few months earlier, in response to some decisions I had made in a Baptist youth meeting. It said: ‘The difference in me is Jesus’. Suddenly I felt even sicker to my stomach. I was already convicted of my sexual sin; now I realised I was a hypocrite. All I wanted to do was get out of there. Before the night was over, the magazine I bought was in the trash and I felt miserable.

A few days later, while I was mowing my lawn on a hot day, I began to think about a Bible verse I had heard in church many times. I didn’t know the reference, but I was able to paraphrase it in my mind. It said: “Enter through the narrow gate; for the gate is wide and the way is broad that leads to destruction, and there are many who enter through it. For the gate is small and the way is narrow that leads to life, and there are few who find it.” Matt 7:13-14.

The broad or the narrow way
I had never experienced a vision before, but at that moment I could see a fork in the road in front of me. I knew I was approaching a crossroads. I could either be a committed Christian, or I could choose a life of compromise. God was showing me that I needed to choose the narrow way before I took any more steps in the wrong direction. I was hit by a terrifying sense of the fear of God, but I also recognised this as His protective love. Within a few days I had surrendered my life to the Lordship of Christ.

Pray for the Millennial generation
Young people today [11-29] – the so-called Millennial Generation* – are continually assaulted by temptations that kids didn’t face in the 1970s. The war for a generation is on – and it is intense. Families are in shambles. Many kids are fatherless. Media has entirely rewritten our moral values in a few short years. Casual sex is considered a ‘normal’ pastime for 14 year olds. And many teenagers today haven’t been exposed to the Gospel, so chances are slim that they might remember a Bible verse from childhood or feel the sting of guilt like I did years ago.

That’s why I’m devoting my time to pray for a spiritual awakening to touch the younger generation. The devil has claimed today’s youth, but the same God who averted disaster in my life can do it in theirs.