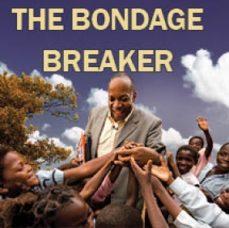 It was 1970, I was a struggling young missionary in Lesotho. Some times only five people would show up to hear me preach. Rather than labour in an empty room, I went where the people were. In the capital city of Maseru, where I lived, I would preach four times a day in the markets, at bus stops and in schools. This story took place during my early ministry years…

A bright young man
Dolphin Monese was a bright young student. He had a big smile and flashing brown eyes. Dolphin studied the teachings of the Jehovah’s Witnesses. He liked the way they undermined the Christian Church. The Church in the Kingdom of Lesotho had become weak and ineffective; rather than follow a dead religion, Dolphin attacked it. In Maseru, he had become a Jehovah’s Witness champion. Each day he walked to school with his friends and they would discuss the great issues of life.
One day as they walked along, they saw a blind man at a bus stop playing a piano-accordion for money. They wanted to take a closer look, especially because the beggar was a white man. But as Dolphin came closer, he realised the man was not blind and he was not a beggar. He was singing happy songs of praise to Jesus in the local Sesotho dialect. The man is a simpleton, he thought.

Preaching in the streets
Suddenly the man picked up his Bible and began to preach. One of the men in the crowd interpreted for him. It was a trick. The man used his music to attract people out of sympathy. The simpleton is clever at least, Dolphin thought. He knew it was not easy to gather a crowd in Maseru to hear preaching.
Hearing the Gospel
I was the blind beggar on the street that day, preaching my heart out. When I finished my sermon, Dolphin stepped forward – not to accept Jesus – but to argue with me. Since he spoke English, we did not need the interpreter. I knew that I could not change this young man’s mind by engaging in a mind-battle. He went on and on attacking Christianity, till eventually the crowd and even his friends departed. It was just the two of us on that curb.
“May I say something” I asked.
“Sure” he replied. “I want to say that God loves you. We were all born in sin and bound for eternal hell, yet He loved us enough to…”
“There is no hell” Dolphin interrupted.
“You will have to argue that with Scripture Dolphin. Eternal torment is in the Bible. But that is not the Good News. The Good News is that God loved the world, even in its sin, and gave His only Son as a sacrifice for us.
Salvation is a free gift, paid for by someone else. We cannot earn it by being smart, or by learning the right things, or by doing all the right things. When we accept this great gift of salvation, He fills us with His love and peace and we are promised eternal life with Him in Heaven. Have you accepted Jesus as your Saviour?”

Accepting Christ
Dolphin left that day promising to return and correct my bad theology. I welcomed him to return, but inwardly I hesitated. I knew he would take advantage of my open door. Every day he returned ready to argue. His school breaks were timed so that he could come hear me at the bus stop. In time I found the opportunity to counter most of his arguments from Scripture. But this was still not enough to convert him. He was a tough nut to crack.
One day as I preached, I sensed a powerful anointing and presence of the Holy Spirit. After my sermon that day, Dolphin stepped forward. “I am ready to accept Jesus Christ as my Saviour,” he said.

A source of bondage
Amazement, almost disbelief leapt up in my heart. This was an incredible moment. The Holy Spirit whispered inside me, telling me that Dolphin should not just make an inner decision for Christ, but he must make a clean break with the Jehovah’s Witnesses at the same time. This was still a source of bondage for him. “Get in my car” I said. He did. When we were inside I said to him, “We will drive to your house and burn all your Jehovah’s Witness books. Are you ready to do that?”
Immediately Dolphin had an inner struggle. So much of his knowledge was bound up in those books. They had given him pride and a place in the world. They had made him feel superior. If I did not place a clear choice before him, he would go into a time of struggle that would last for a long time. “Choose Jesus or Jehovah’s Witnesses,” I said.

Breaking bridges
At last Dolphin nodded. “You are right, let us go get the books and burn them.” This was a sign to me that the Spirit of Jesus had entered his heart. By burning these books, he was breaking the bridges to his past – bridges that the devil would have loved to keep under constant traffic. I drove to his house. He went inside and brought out an armful of books, depositing them in my minibus. “Are these all of them?”
“I have another shelf of books at my grandmother’s house in the village.”
“We will go there and get them. Get in.”
“But I don’t own those books. They are borrowed.”  said Dolphin. “I will pay for the books you borrowed. But we will burn them today, borrowed or not.” I replied.

Freedom
Dolphin agreed. He gathered all the books from the village and put them in the car. I purchased a container of gasoline and placed the books in a barrel. I doused them with fuel and then handed Dolphin the match. When he lit it and dropped it into the barrel, an explosion of flames leapt into the air. I felt a great sense of relief. As the books burned, I could see a new Dolphin Monese emerge.
The burden of carrying a heavy religious yoke was exchanged for the easy yoke and light burden of Jesus Christ. Joy, peace, gentleness, meekness – all the fruit of the Spirit came pouring forth. In the years that followed, Dolphin grew in faith. I asked him to be my interpreter on many occasions and he learned much about preaching and ministering through this process.
He went on to Bible school, and today he is the pastor of a wonderful church in Lesotho. His intellect and personality are submitted to the Will of the Lord and his winning smile and pleasant face is a joy and comfort to thousands.

Note from Reinhard Bonnke
As witnesses and evangelists, we must not be clever, we must be clear. Our message is the simple Gospel, not higher consciousness. We are not helping people to get God right, but to get right with God. The Holy Spirit alone opens hearts and minds.