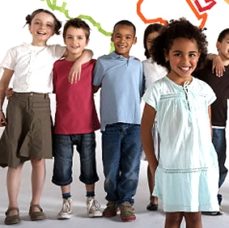 Introducing Child Theology
It seemed to me that it might be useful this evening to try to describe Child Theology in the context of my personal journey of discovery. The narrative will give us a chance to note related aspects of theology (like, for example Children’s Spirituality) that feed into and draw from Child Theology, but are not the same thing.  And it will also help us get to know each other better.

Stage One:  Living among Children
I was born into a rather unusual household in the East End of London (very near where the 2012 Olympics will be held in fact).  My grandparents had shared their lives with motherless children, and my parents did the same: in the very same house!  This is how it came about that I grew up alongside forty other children, and when I married, Ruth and I continued the family tradition and live in exactly the same place over 110 years after my grandparents began their life’s work.

So I have been living among children virtually all my life.  And this introduced me to two aspects of theology that I wish to note.  The first is children’s spirituality.

Children’s Spirituality
There has been a lot written about this in recent years including a book just out called Listening to Children on the Spiritual Journey by Catherine Stonehouse and Scottie May (Baker Academic, Grand Rapids 2010).  The core idea is that children have their own ways of making sense of the transcendent: they are hard-wired for relationships of many sorts.  In our desire to teach them Christian faith we risk not listening to and appreciating how they are already reaching out to, in touch with, and reflecting on, that which is beyond.  Rather than relying solely on catechisms and didactic methods of instruction (however lively and enlightened) it is important, as Gibran memorably pointed out, to give children space for “their own thoughts”.  Godly Play is an expression of how this can be done.

Now this is has not been a total surprise to me because I have had the privilege of growing up and living alongside children and listening to them all through my life.  At first I was amazed at the depths of their insights, and the integration of thought and feelings, but then I came to realize that as an adult I had much to learn from them as well as to teach them.  It was a question of how best to do this.

One incident stands out above all others: we were camping in North Wales, and my late brother in law was tucking up three Nigerian youngsters who lived with us for the night.  He had read a story to them, and then they prayed.  I noticed him leave the tent with tears in his eyes.  Concerned, I sidled up to him to ask what was wrong.  He pointed to the tent and, through his tears, said that they were praying and he didn’t feel worthy to stay in their presence.  The prayer was continuing and so I was able to listen to the earnest, and remarkably honest prayer from outside the tent, and it wasn’t long before I was feeling the same way.  It was as if God was present, and so near that it was possible for the boys to whisper and for Him still to hear their every word.  They prayed for members of their family far away, and those who were part of their new extended family: there was a sense of deep connections, forgiveness and above all integrity.  This was for me a memorable introduction to children’s spirituality.

Then I think of a time when I was gardening with one of the teenagers we help.  We were doing some weeding of the vegetable patch where not so long ago we had built our annual bonfire to celebrate November 5th (Guy Fawke’s Night).  The ashes had long since been disposed of, and among the plants growing were some fine specimens of rhubarb.  The young person looked at the sturdy stems and wide green leaves and commented:  “Rhubarb reminds me of God”.  I paused to take this in, and eventually had to tell him that he had lost me a little: in fact I couldn’t begin to make the connection.  He went on without hesitation: “It’s so patient and forgiving.  If someone had a bonfire on top of me every year I would be very angry and certainly would not produce anything for them to eat.  Yet the rhubarb comes up year after year with no trace of resentment.”

Child Theology will always recognize that children have experiences and thoughts about God that will bring light and understanding to adults.  But that is not what Child Theology is primarily about.  This leads us to the second discovery, Children’s Theology.

Children’s Theology
Children can be theologians in the sense that they will have their own brands of theology, and their particular ways of expressing the truths that they discern.  This means that it is not always adults who teach theology: at best it should be a two-way process (like all learning).  I do not mean that children’s theology is on a par with mature adult theology, but that we must not assume their minds are a tabula rasa as far as theology is concerned.

Let me give you an example from a Godly Play session that I was invited to attend.  The subject was the Ten Commandments.  The leader told the story of what happened at Mount Sinai, and went on to explain how Jesus taught new insights into God’s law.  One of the things he said was that we should love God, and our neighbours as ourselves  But even more than that, we should love our enemies.  This was too much for one of the children.  “Are you serious?” he asked.  “I can’t even love my sister, so how could I love someone I hated?”  (His sister nodded sagely in agreement.)  “If that is what Jesus taught then you can count me out.  What about the Koran?  What does it say?  Is it any more realistic?”

The discussion continued to consider why the armies of our own country were currently fighting their enemies in Iraq and Afghanistan.  Why didn’t our government listen to and obey Jesus?

What I was witnessing was a child doing theology.  He was thinking out loud about what the Scriptures and Jesus taught and trying to relate this to his own situation and the world around him.  What is that, if it is not theology?

In numerous ways children do theology, notably in their questions and prayers.  This is never to be patronized or dismissed:  who can say that adult humans are any nearer to the whole truth from God’s point of view?

But this is not what we mean by Child Theology, and this leads me to the next stage on my journey of discovery.

Stage 2:  Caring for Children
As I took more responsibility for caring for the children and young people it fell to me to assume the leading role in teaching them about God, Jesus and the Bible.  This leads me to the third important activity connected with (but distinct from) Child Theology, Religious Education.

Religious Education
There are different terms for this around the world, but in essence the process is about how Christian adults communicate the Christian faith to children.  This is theology for children, and it has a long pedigree.  There are pictures and illustrations, children’s Bibles, children’s catechisms, Sunday Schools and Bible Classes, children’s books and aids to Bible study, children’s hymns and choruses: all of which have the intention of teaching children about the Christian faith.

Some see this teaching as a task to be undertaken solely by the church, but I have always been convinced that the family (“little church” as it has been called) had a vital role in this too.  So it fell to me to think about how best to do this in our unusual household.  The children came from different faith backgrounds and cultures, they varied in their knowledge of church and the Bible, and they had very different intellectual abilities, and to cap it all there was a large age range!

It took several years of experimenting before I came to realize that most of the resources on offer for families made the same assumption: the Bible itself was mostly unintelligible and uninteresting to children.  It was best dispensed in small doses, and “the pill” needed to be sugared with lots of lively additional material and activity.  In time I came to see that the reverse was the case: the narrative of the Bible was what held the children’s attention.  You know that this idea is at the heart of the meaning of the word “Gospel”: it is riveting, spell binding good news!