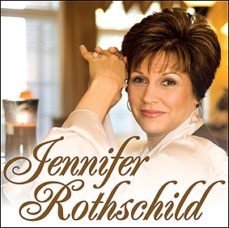 Jennifer Rothschild: A Blind Woman’s Incredible Vision
How do I look?” Jennifer Rothschild holds out her arms, patiently awaiting inspection. Setting aside the newspaper, her husband, Phil, carefully examines her from head to toe, smoothing a stray lock of hair and dabbing at a misplaced fleck of mascara before declaring, “Beautiful.”

Of course that’s what every wife wants to hear. But for Jennifer her husband’s response isn’t so much about making her feel good, it’s about making sure she really does look okay – something she can’t determine for herself, since she’s blind. So Phil has become her mirror. He applies Jennifer’s nail polish, picks out her clothing, and checks her hair and make-up each morning.

Relying on her husband
“Thankfully he’s not colour blind!” Jennifer jokes. But then she admits, “He’s saved me from some embarrassing situations. Like the time I nearly went out of the house with lip liner on my eyes and eye liner on my lips!” (Yes, Jennifer still does her own makeup).

Grace and grit
Jennifer’s dreams of becoming a commercial artist faded with her blindness, but words and music have replaced her canvas and palette for more than 25 years.

At age 15, she was looking forward to earning her driver’s license and dreamt of turning her love of drawing into a career as a commercial artist or cartoonist. The only bump in the road seemed to be some vision problems, which she hoped could be corrected with stronger glasses. When that didn’t help, she and her parents consulted a specialist at an eye hospital.

“It is well with my soul”
What they learned was devastating – Jennifer had a rare degenerative disease, retinitis pigmentosa, which would slowly steal her sight and eventually leave her blind. It was a blow, to be sure, but Jennifer and her parents accepted the diagnosis with a quiet grace.

In fact, one of the first things Jennifer did after returning home was to sit at the piano and play, by ear, a favourite hymn: ‘It is well with my soul’.  Though she had been taking piano lessons for years and practised diligently every night, she noticed that this time it was different. Looking back, she believes God guided her hands to play ‘It is well with my soul’ by ear.

God uses our circumstances
The last book she read prior to losing her sight was Joni Eareckson Tada’s 1976 autobiography, which detailed her spiritual journey after being paralysed in a teenage diving accident. “She became a hero to me, a hero in my heart, even though I didn’t know I was going to lose my sight,” recalls Jennifer. “During my difficult days, I would think, ‘if she could do it, so can I.’

Sometimes you need to look to someone who embodies faith.” Since her diagnosis, Jennifer says that one of the hardest lessons she’s had to learn is that God uses painful circumstances to refine us. Today, Jennifer hopes that she can provide similar inspiration for others, regardless of the nature of their struggles, through her ministry as an author and speaker.

Walking by faith, not by sight
As Jennifer was learning lessons in the dark, her steps of faith led her to ministry. Shortly after she played ‘It is well with my soul’ by ear, she wrote a song and sang it for her high school choral director. To Jennifer’s surprise, the director asked her to sing her song in the school’s concert. From there she continued to use the gift of song. She led worship weekly at a Christian gathering for hundreds of college students. Soon word spread about Jennifer’s musical talents, and she sang everywhere.

Jennifer met Phil in the early 80s at college, where she was studying psychology and Phil, who was a year ahead of her, was studying business management. Jennifer was immediately attracted to Phil’s charismatic personality – though he insists it was actually his hair. “I had a big, bushy Afro, and Jennifer had long black hair,” Phil says.

For his part, Phil recalls being impressed by Jennifer’s spirit. “I’d see her walking through the cafeteria with a friend, and I knew her eyesight was terrible and getting worse by the day. She was beautiful, but also spunky, witty and smart. I just knew we’d complement each other, and I wanted to take care of her.” They dated off and on over the next few years, eventually Phil proposed.
Together for better or for worse
Though they knew their marriage would face difficulties created by Jennifer’s eventual blindness, Phil had no doubts. “It was never a concern for me,” he says. “Jennifer was smart and talented, and I knew she had so much to offer. Losing her eyesight was something we’d make the most of and rise above. And although it’s been difficult at times, together we’ve been able to do that with God’s grace.”

“Phil’s an eternal optimist,” Jennifer says, smiling. “The word ‘problem’ doesn’t exist. In his dictionary, it’s called ‘opportunity’. When he chooses to be committed, he’s totally committed. And he’s resourceful. I was confident he’d do whatever it took to make it work.”

After she and Phil married in 1986, he encouraged her to make a professional recording. That first cassette tape created more opportunities to sing in new venues and soon she was invited to lead worship with well-known Christian speakers such as Beth Moore – which opened the door for Jennifer to share her story. After this, she was asked to speak at various women’s events.

A new ministry
Jennifer admits she initially felt unqualified for such a task. But Phil’s belief in her was solid. “When my first speaking invitation came, Phil took the call and said, ‘Sure she’ll speak.’ He has always had more confidence in me than I’ve had in myself. To me, that shows what kind of man he is, and affirms that he’s the one God chose for me.”

Phil’s business expertise and his belief in Jennifer’s gifts make him the perfect person to be her business manager. “My role is to believe in Jennifer and her message and to find opportunities not just to share that message but to grow and develop.”
God has continued to use their shared gifts to expand their ministry and in 2008 the couple launched a women’s conference ministry called ‘Fresh Grounded Faith’. Jennifer does between 30 and 40 speaking engagements each year, primarily on weekends, which allows her to be at home with Phil and sons, Clayton, 21, and Connor, 12, during the week. She’s also appeared on several television programmes, including the Billy Graham Prime Time Special, The Dr. Phil Show, and Good Morning America.

Self talk, soul talk
Jennifer has also written six books, including the bestselling ‘Lessons I Learned in the Dark’. Of her latest book ‘Self Talk, Soul Talk’ Jennifer says: “I entertained a steady stream of self talk over the years. And unfortunately, lots of it was destructive. God began to show me when I was in my twenties the damaging effect of what I was saying to my soul and that if I didn’t control my thoughts, they would control me. He showed me the best way to control my thoughts was to make them truthful.”

Experiencing God’s grace
Whether writing a book, song, or speech, Jennifer finds most of her ideas through daily living. “God writes a book in my life before I put it on paper,” she observes. Known for spiritual depth, and a down-to-earth style, Jennifer weaves together music, colourful illustrations, and Biblical Truth to help audiences find contentment, walk with endurance and celebrate the ordinary.