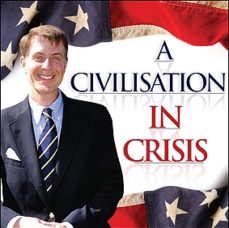 A Civilisation in Crisis
Our world is in the grip of a spiritual and moral crisis. Western countries have largely abandoned their Christian foundations, and the Eastern world is awash with militant Islamic fundamentalism which aims to eradicate any Biblical influence. According to Tim Goeglein, the Vice President for External Relations at Focus on the Family, this crisis is rooted in fatherlessness and immorality.

Disturbing statistics
Tim was on a speaking tour in South Africa recently and shared his thoughts on the global crises and its origins. Having served in the White House as the Deputy Director of Public Liaison for George W. Bush, Goeglein is well equipped to comment on the political and social malaise facing modern civilisation.

Speaking to YPO leaders and businessmen, Tim noted the following: “40% of all marriages end in divorce. 75% of all second marriages end in divorce. 41% of Americans are born out of wedlock. These are dire stats. In 1965 Daniel Patrick Moynihan (who worked for President Johnson) looked at divorce and out of wedlock birthrates during WWI and the Great Depression and found that despite economic pressure and hardships, divorce and wedlock rates remained exactly the same. It was counter intuitive as people assumed that during tough, stressful times, one would see more divorces etc. Interestingly, not only did the rates stay the same in US, but all over the world.

Reason for concern
Fast forward to 1965, the first time in history that out of wedlock rate attained 25% (1 in 4), which according to Moynihan constitute a crisis. Not only a social and moral crisis, but also an economic crisis, as with a decline of the family, the fiscal obligations of government increase drastically.

The root cause of the problem
By 2011, 40% of all Americans are born out of wedlock. Domestic violence, alcohol abuse, drug abuse, are some of the pressing problems, but the primary cause of these evils is fatherlessness – a lack of fathering and absent parental influence – of epidemic proportions. It is not limited to the US though – studies show the rates are the same in other Westernised countries, including SA. As of today, not a single European country has fertility rates at replacement level. The whole concept of the nuclear family is under siege. If we continue on this trajectory, your children and grandchildren will understand a profoundly different concept of family and marriage.

The foundation of society
The foundations of liberty are virtue – moral excellence – that stems from the Judeo-Christian Faith. But if you destroy these pillars, you are curtailing your own liberty. You will eventually live in a civilisation hostile to liberty itself.  The great Irish parliamentarian and philosopher Edmund Burke rightly said a country, culture, and civilization cannot have order in the commonwealth if it does not first have order in the individual soul.   This is an expression of applied Christianity. The order in the individual’s soul can only come from a root of peace – that comes from Christ.

The Millennial Generation (18-29 years old) albeit a remarkable generation, are by their own admission often a culturally, historically and spiritually illiterate. Many of the pathologies we see today – teen pregnancy, high drop-out rates from school, and directionlessness – is an outgrowth of a profound  spiritual crisis. Why? Because you have weak families. Money and teachers won’t improve the graduation levels – stronger families will improve it. Our grandparents would be shocked at the social composition of our society today.

As the family goes, so goes
What is the genesis of this soulless epidemic? Simply put, your children have been culturised by a school system, Hollywood and the publishing industry to such an entrenched extent, that even if they are raised in a Christian home, they will disagree with you on the fundamentals of what constitutes a family, a home, parenting, etc. The media and spiritual quotient has changed. If you want to know the future of a country, show me the health of the family of that country; as the family goes, so goes the nation.

The solution to the problem
Politics is downstream from culture; you can’t save South Africa through politics. The government is not the solution to the problem. A restoration of the family (based on Biblical principles) is the hope of the nation. The principle difference between liberals and conservatives is that liberals believe you must change politics to change culture. Conservatives say you must change culture to affect politics.

We have ceded authority and given license to alternatives that seek to influence and infiltrate society. You can’t impact culture if you are not in contact with it. Are we in touch with the youth and the social climate of today? Who is impacting your culture? Considering this analysis, you may see a bleak picture of a civilisation in despair, but we have hope, Jesus is the solution.“
“He will not falter or be discouraged till He establishes justice on earth. In His Law the islands will put their hope.” Isa  42: 4

Drawing from his extensive political experience and knowledge, we sat down with Tim to ask a few pertinent questions about the crises we see around us.

Looking at global events in Egypt and Libya and considering the sovereignty nations possess, what role should external bodies play?

I do not believe that every country only has interests and not allies. We are living in extraordinary times, and any politician who misreads the times we are living in, does so to their own detriment. In a centralised world of twitter and facebook, there are no longer one or two leaders leading revolution. When liberty is being violated, we have a responsibility to speak out. Nations have a moral obligation to work together when human life is at stake.

Looking at new superpowers like China, what is your snapshot of the political landscape?
No country is ever truly a superpower unless it articulates sanctity of life, liberty and family. No nation can be considered great until it codifies those principles. China may be an economic superpower, they may have remarkable military power and geographical influence, but unless the rule of law is a defining characteristic of China, until they allow liberty to flourish, until families are given the autonomy they deserve, then China is one other powerful nation, but not a superpower.

How would you sum up the Bush administration? And that of Obama?
My view is this: journalists (media) are often the first historians, but by the long lights of history, we will evaluate presidents and prime ministers and leaders in government not by what seems most immediately apparent, but by the dictates of history, and the results their policies actually achieved. I feel confident on the core issues, that George W. Bush will be seen as a successful president. I believe because of his policies, the US has been a counterweight to the rise of China. He kept us safe on our domestic soil; it is nothing short of miraculous that we did not have another terrorist attack on our country. History is a very tough judge and any great president must learn that it is a bad thing to be on the wrong side of history and that it is a great thing to be on the right side of history.

I believe that on big questions like human liberty, the sanctity of every life, the preservation of the family, George Bush will be aligned on the right side. The jury is still out on Barack Obama, as he is still in office. That said, domestically, Obama has made many policy choices that are in opposition to the family, marriage and in opposition to healthy parenting…with dire consequences.

What pressures do politicians face that the public is unaware of?
Having worked for one US Senator and a US President, I can say that the public pressures are so strong, that if the office holder is not systematic about it, it will impact their family. Whether you work in the Oval office or at the local store, you have the same responsibility – to ensure your family has a sacred and protected space; that your marriage is healthy. These relationships help one weather the stressors of public life.

Julian Assange (of Wiki-Leaks) is seen by some as the Robin Hood of politics…
I believe very firmly that for diplomats to do their jobs most effectively, they need to have a strong level of trust and confidentiality. For effective diplomacy that advances liberty for as many people as possible, the diplomat has to have trust; once that confidentiality is violated, it is a total violation – like the ones we have seen with WikiLeaks. These can have real ramifications for people in countries led by totalitarian regimes.

When they as opposition figures are able to speak with trust and confidence to liberty loving nations, if they feel that confidence, they can advance liberty.

WikiLeaks has exposed innocent people who have shown remarkable moral courage as opposition figures in their very difficult countries. It has potentially put their lives at risk. In my opinion there is no part of Robin Hood in that.