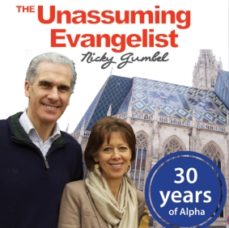 Alpha is arguably one of the most successful tools of Evangelical Christianity in recent years. It now has a presence in 169 countries, 112 languages and over 20 million participants worldwide. For many people, Reverend Nicky Gumbel is Alpha, and that makes him one of the most influential men in modern Christianity.
Humble, charming and chatty
You wouldn’t think it to meet him though. He’s the epitome of an English village vicar: humble, charming, chatty – and incredibly intelligent.
Nicholas Glyn Paul Gumbel (born 28 April 1955) is an ordained Anglican priest, and author. Nicky is the son of Walter Gumbel, a German Jew from Stuttgart whose licence to practise Law in that city was withdrawn in one of the early Nazi purges. Walter emigrated to Britain and became a successful barrister. Gumbel’s mom, Muriel, served as Mayor of the Royal Borough of Kensington and Chelsea.

From Atheist to Alpha Architect
Initially an avowed atheist, Nicky was converted to Christianity in his first year at Trinity College, Cambridge through reading the New Testament. He said, “I was enthralled. It was as if I had found what I had been looking for all my life”.
Nicky was educated at Eton and after graduating in Law in 1976, he followed in his father’s footsteps and became a practicing barrister.
Then in 1982 he announced his decision to leave the Bar to train for ordination in the Church of England. In 1983 he began theological studies at Wycliffe Hall, Oxford where he graduated with an honours degree. Gumbel was officially installed as Vicar of Holy Trinity Brompton Church in 2005. He is supported by his wife Pippa, and the couple have three adult children.

Crossing borders and beliefs
The Bible says that we judge a tree by its fruit – “a good tree bears good fruit” – and this can certainly be said of Alpha, one of the most influential courses in the world, crossing borders, boundaries and beliefs. Under the accomplished and very British (tempered) direction of Nicky Gumbel, Alpha has continued its impact for Christ across denominations and demographics.
For Nicky, Alpha’s success lies in its approach: “I think it’s a low key, relaxed, unthreatening, non-confrontational way for people to explore pretty big subjects. I think a lot of people do have questions about life: ‘What’s the purpose of my life?’, ‘What’s the meaning of my existence?’, ‘Why am I here?’ It’s hard to find a place where you can discuss those issues. “

Reaching the unchurched
“You can’t go down to the pub and say, ‘What do you think the meaning of life is?’ It’s hard at a football match to discuss those kinds of issues. But actually, most people have those questions,somewhere in the back of their minds.
And if you can find a place where you can discuss it with a group of people who, like you, are outside of the Church, and it’s a non-threatening, relaxed environment, quite a lot of people want to do that.”
For Nicky, “the purpose of the course is to give as many people as possible the opportunity to explore these things. I was an atheist and I came to experience a relationship with God which had a radically transforming effect on my life, on my relationships, on every aspect of my life, for the better.
So, obviously I hope other people will experience that. But it’s very important to me that they have a sense of freedom while they’re doing the course and they don’t feel in any way pressurised in to it.”

Answering life’s questions
To date Alpha has been replicated in dozens of countries, reaching millions of churched, formerly churched and unchurched people. Because of its simplicity and out-of-the-box thinking, Alpha has become a blueprint for  modern evangelism – actively engaging with tough critics!
Timeline
Alpha was started in 1977 by  Reverend Charles Marnham, of Holy Trinity Brompton, a Church of England parish in London. Rev. John Irvine took over running the course and developed it into a ten week format.
In 1990, Nicky Gumbel took over the running of the Alpha Course from Reverend Nicky Lee. The course was transformed under Gumbel’s leadership from being one designed for new Christians to one primarily for those outside the Church who would not consider themselves as Christians.
In 2008 over 33,500 courses were offered in 163 countries by Anglican, Lutheran, Presbyterian, Pentecostal,  Baptist, Methodist Orthodox and Catholic Churches.
In this year, 60 churches from 15 denominations in Cape Town joined together for the first city wide Alpha Invitation on the continent of Africa. All the churches worked together to promote and run courses at the same time.
On 21 July churches all over the Western Cape and East London, Pietermaritzburg and Durban will be joining together for the 4th Alpha Invitation. The theme will be ‘Keep Searching’. If your church would like to be a part of this please contact the National Office on  082 977 2885 or 021 438 4077 or cpt@alphasa.co.za
South Africa
Alpha runs in 169 countries, in every culture and context: from Communist China, to rural India, war-torn Burundi, to small town America, to a prison in Brixton –  across the globe people are hearing of Jesus!
The National Office of Alpha South Africa launched in 2000 although courses had been running here from 1994/1995. It’s estimated that more than 500 000 people have done The Alpha Course in South Africa with the number of churches currently running the course at over 600! Every year they host an Alpha outreach campaign encouraging churches to run courses at the same time. Alpha SA are also developing resources tailored to our context and in our local languages.
Get involved with Alpha South Africa
Alpha SA works in partnership with local churches to run courses around the country. They also have various offices set up nationwide to assist with Alpha courses and programmes.