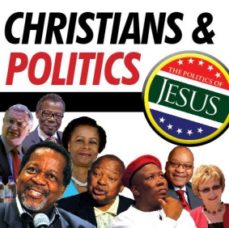 A threat to the state
At the time of Jesus, the Jews were living under the government of the Roman Empire. People could worship the gods of their choice, so long as they also worshiped the Roman Caesar, who was seen as their god.
Refusing to worship Caesar (the Emperor) was seen as an act of treason, punishable by death. That is why so many Early Christians were persecuted by the Roman state. Not because they were involved in various religions, mind you, but because the Roman authorities saw the Christian religion as a threat to the state.
As believers, we understand why: because believing in and living for Christ Jesus leads to true freedom – which no “leader” can take away.

Emperor worship
The official religion of the day was Emperor Worship. This meant that it was a political offence to not worship the Roman state. Christians were burned at the stake and eaten by wild animals because of accusations for the crime of treason.

God has supreme authority
Jesus Christ stated that He, and not Caesar, has all authority in Heaven and earth. His disciples understood that God’s Laws take precedence over Caesar’s laws. In other words, He challenged the political and spiritual authority of the most powerful government in the world at that time.
Jesus told us to render unto Caesar what is Caesar’s and to God the things which are God’s. The Bible makes it very clear that when man’s law violates God’s Law, then we are to obey God rather than man. And we see the disciples doing this in Acts 5.

Challenging political leaders
We know that Jesus’ disciples were not involved in politics. But that was because Rome was not a democratic country. Political involvement, as we know it today, did not exist. We know that Jesus Christ proposed a higher Law and a new King, Himself, and the Christians of His day were prepared to Sacrifice their lives for Him.

Many people think that the Early Church used to “just preach the Gospel”, which they think is very good and not political.

Implementing God’s Word
But the question still remains if God expects us to become involved in politics today? First consider the word ‘political.’ In today’s life, we see this as the practice of governments in the civil arena; ‘politics’ usually refers to involvement and influencing those who govern.
If we are going to fulfil God’s purpose in ministering to people’s needs, then surely this means that we are going to have to deal with social challenges.
How can we implement God’s Word and demonstrate love for the poor if we do not get involved in politics? How do we take care of the poor, the widows and the orphans, without being involved in policy formation?

Exercising influence
At the very least, we play an indirect role in being involved in politics by voting in the national and local elections. It is very important to influence government officials because the poor are usually impacted first by changes in the economy, and these changes are generally brought about by new laws and policies as passed by government.

Godly Laws are needed
God has also commanded us to liberate the oppressed. We often find that the greatest agents of oppression in the world are secular humanist and authoritarian governments. Wouldn’t it be an effective way of liberating the oppressed by influencing those governments to pass laws that can help, rather than exploit, these people?
Government policies can play a role in protecting preborn babies from abortion. Through political laws a country can protect women and children from the exploitative industry of pornography and human trafficking. Sex and violence on television, women being viewed as sex objects and being abused and raped, can be corrected by the passing of godly laws.

God’s expectations of government
The following four verses help us to understand what God expects from Government:

“A wicked ruler is as dangerous to the poor as a lion or bear attacking them.” Prov 28:15
“With good men in authority people rejoice, but with the wicked in power, they groan.” Prov 29:2
“When rulers are wicked their people are too, but good men will live to see the tyrant’s downfall.” Prov 29:16
“Where there is ignorance of God, the people run wild, but what a wonderful thing it is for a nation to know and keep His Laws.”
Prov 29:18.

Following God’s Law
While the institution of government is ordained of God, it is obvious that God does not approve of all governments. It should be obvious that God did not approve of Hitler, Stalin, Mao or Idi Amin or any other bloodthirsty dictator in history. Governments must live and rule according to God’s purpose; they need to protect the innocent, punish the guilty and preserve the peace, so that we can live peaceful and godly lives in our country.
When God’s Law comes into conflict with man’s law, then we as Christians need to obey God’s Law above man’s law. And, this might also mean that we need to physically resist the wicked when they oppose the Law given to us by God.

Pray for our leaders
In 1 Timothy 2:1-4 we are instructed to pray for God’s wisdom and for direction for our leaders so that we might “live peaceable and quiet lives in all godliness and holiness. This is good and pleases God our Saviour who wants all men to be saved and come to a knowledge of the truth.”
We know that the function God has given government is the dispensing of justice and the restraining of evil (Rom 13:1-4). For God to demonstrate His justice in government, He uses godly men and women to do His Will.
“Evil men don’t understand the importance of justice, but those who follow the Lord are much more concerned about it.” Prov 28:5.
“A good man knows the poor man’s rights, the godless don’t care.” Prov 29:7.

Taking responsibility
We need godly men and women in positions of authority, so that we may have a peaceful, just and moral society for the people of our nation to live in. If the moral, righteous people of our country do not take their responsibility in government, then we leave the doors open for us to be governed by the wicked and immoral.
We need to defend those who can’t defend themselves (Prov 31:8). We are to give fair judgement to the poor, the afflicted and the orphans. How can this be done in a society, when Christians remain outside the areas of politics and justice?

Early Church Christians
Christians were told by the Apostles that they must not sue each other in secular courts, but that they needed to go to the Church Elders to settle their civil disputes.
The Roman governors of the day began to appoint the Early Church Bishops to positions as judges, because of their reputation for integrity and high moral ethics. Rome became very insecure because their court systems became corrupt and the only way to correct this was for the Roman authorities to appoint godly men as the administrators of justice.
Impacting society
In England, we saw statesmen, like William Wilberforce – who led the fight to abolish slavery. Christians such as Lord Shaftsbury were also involved with correcting child labour abuses. Christians brought about reform to insane asylums, they worked in prisons and had a great impact on every level of society.
Christians established thousands of missions around the world including orphanages, schools, hospitals and medical clinics. Christians have led the way in bringing literacy and modern sanitation to multiplied millions of people around the world. All these reforms were brought about by social action of godly men. Many leaders in Africa received their basic education from missionaries and church schools.
Become involved!
We, as Christians, need to be in government. Here are some simple ways of getting involved:

Pray every day for South Africa and its leaders.
Be informed regarding where the various parties stand on moral/Biblical issues
Select, elect and actively support godly men and women, who are prepared to stand for public office.
Vote on every Election Day – whether municipal or national.
Download your free Biblical Voter’s Guide from www.savotersguide.org and share it with others   

CHARL VAN WYK is involved in Africa Christian Action as well as an author and radio presenter. For more information visit: www.christianaction.org.za