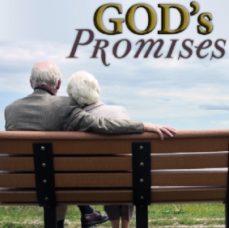 From my youngest days I was introduced to God’s promises and their relevance and fulfilment in everyday living. The one that springs to mind most prominently is Philippians 4:19: “And my God will provide all your needs according to His glorious riches in Christ.”
How well I remember the occasion when there was too much month left at the end of my mother’s housekeeping money. She normally kept the monetary notes hidden behind the mirror in the bathroom and she just needed to turn one of the screws slightly to partially release the mirror from the wall, for a note or two to fall out into her hand. This time she had done so again, but there was nothing. She wasn’t worried and kept saying that God would meet the need.

God’s miraculous provision
After a few days, the situation became urgent and she went back to the mirror for the last try, made just one turn with the small screwdriver and out fell a five pound note! At the proverbial eleventh hour God had met the need, as she said He would. Experiences like this left a lasting impression on my young mind.

Keep on praying
Years later, an aunt of mine was widowed and had to raise her three children alone. Although money was tight she faithfully tithed what little income she had. The annual rates were due on her home but she did not have the money, so she prayed about the situation.
On the day before payment had to be made, she wondered what she was going to do. Then, as she walked through the house and looked towards the front door, she noticed an envelope lying on the carpet. In it was sufficient money to cover the payment and an anonymous note which merely said: “Mrs S. God DOES supply our need.”

A daring idea
From time to time, scary but realistic stories surface about the hardships of some pensioners. Also, economists give statistics of how much money an individual should have saved before he or she retires.
Any wonder then that these factors negatively influenced my thinking when my husband, Ken, said he felt an inner prompting for us to apply for early retirement? Six years early! We had seen some colleagues work until retirement age and then die within a short time afterwards. From that viewpoint it made sense to enjoy a slice of early retirement.

Doubt
“We’ll never manage financially,” I told him. Deep down I doubted whether we would manage even if we continued working to age 65.
“Remember Philippians 4:19”, Ken said “And my God will meet all your needs according to His glorious riches in Christ Jesus”.
I believed that promise and we had experienced it first hand while Ken was at the Bible College and I was the sole breadwinner. But, in spite of this, I reminded him that his broken service spent studying would undeniably adversely affect his monthly pension.

Seeking God
Wisely, Ken suggested that we make a concerted effort in prayer and ask the Lord to show us, beyond any doubt, what His Will was in this important matter. Less than a month later, we realised that following the Lord’s prompting to take early retirement was the right course.
We both worked for the same company and, at that stage (1994), early retirement was totally out of pattern with the staff pension scheme. Consequently, there would be a penalty of a 16.5% drop in each of our monthly pension payments.
From that point on God began to allow intermittent gems of confirmation that we had not only made the right decision, but that the timing was perfect as well.
Stepping into the unknown
The 28th of February, 1995 was a wonderful day for us. Having been blessed with a God-given marriage, being able to spend all day and every day together was something we had dreamed about for a long time – now it was about to become a reality.
We had no way of knowing that we stood on the threshold of a period in our lives in which we would be overwhelmed by the mighty hand of the Divine Governor of the No-Reserve Bank of Heaven!

Surprises from God
We faced a whole new era in budgeting and living on a reduced income. The first surprise came when our monthly premium for short-term insurance was reduced, because we were now pensioners.
Another surprise followed just six weeks later.  The company for which we had worked celebrated 150 years of existence.  As pensioners, we each received a supermarket shopping voucher for R150 and a rosewood clock.
It had never been company policy to give an increase during the first year of retirement. Yet, a mere 3 months after we retired their policy changed and we both received a small increase. God was at work!

Significant blessings
At the beginning of the next year the company’s pension fund declared a surplus and our pensions were increased by 30% – and that was over and above the customary annual increase which followed within a few months. We had been divinely and over-abundantly compensated for the 16.5% penalty imposed on us for early retirement.
In 1999 the company demutualised and we each received an allocation of a large number of shares. We chose rather to take the money. This enabled us to pay off our bond, to buy the vehicle that we had not been able to afford when we retired, to give to the Lord’s work and to help others with financial difficulties. We experienced the truth of the Bible text that says “it is more blessed to give than to receive.” Acts 20:35.

Overwhelmed by His grace
Late in 2008 the world economy was hit by a financial crisis and many companies cut back on annual increases for their stuff. We asked around and were told by the widow of a former member of management that there would not be an increase. Mulling over the forthcoming hikes in electricity, water, rates and medical aid tariffs, we were thrown even more onto God’s mercy.
The next morning in my devotional time, I read: “God’s ability to provide is not governed by the world economy.” I thanked my Heavenly Father for His timely reminder. Next day, in the post we received our increase notifications. Our informant had been mistaken.
Praise the Lord!
As Charles Spurgeon once said: “Take the promises to the throne. Go to God over and over again with this: ‘Lord You have said it, do as you have said’. Plead His written promises and He will perform them.”
Psalm 103:2 says: “Praise the Lord, O my soul and forget not all His benefits.” That is something Ken and I did daily without fail (he has since passed away).
I have witnessed God fulfil His promises for provision throughout childhood, adolescence, adulthood and into retirement. His provision never ceases to amaze me and He will continue to fulfil His promises. After all, He is Almighty, He is Sovereign and, as Hebrews 13:8 says: “He is the same yesterday and today and forever.” 