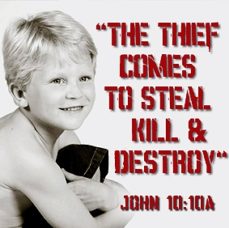 The Thief Comes to Steal, Kill and Destroy
In March 2008, our precious seven year old son Joel was diagnosed with brain cancer and given months to live. It is difficult and emotional for our family to view these pictures, they are a harsh reminder to us that the devil comes to rob, kill and destroy, and he has no preferences when it comes to race, age, gender or rich or poor. He wants to destroy anything that brings glory to God’s Name.

A lack of knowledge…
In 15 years of being a Christian we had never seen healings. Signs and miracles were not a preaching emphasis. The healings we heard and read about were nearly all associated with the intervention of medicine rather than Godly supernatural healings. So as parents we were faced with our son’s death sentence with not a single reference point to give us faith that God would heal him and no doctrinal underpinning to enable us to stand on God’s promises. We were in a place spiritually where the dominant view was that God would sovereignly decide who He would heal; so we were in His hands irrespective of what we did or believed for. After a brutal six months of two brain operations, extensive chemotherapy and radiation treatment, our precious ‘Sunshine’ was robbed from us and left a community broken, devastated family and hundreds of people who had prayed for him asking the big question – Why?

At our son’s memorial service well meaning Christians said that they did not know why God took Joel. Something about these sentiments didn’t agree with my soul, and I (Kevin) committed myself to discovering the answer to the big question of why our son had to die.

Searching for answers
Apart from reading the Bible, I literally spent hours  devouring books by John G. Lake, Smith Wigglesworth, T.L. Osborne, F.F. Bosworth and just about every book I could get my hands on related to healing. I was given a copy of ‘The Divine Healing Technician’ – a John G. Lake Ministries training manual.

Finding out God’s Will for us
Probably because of the simple way in which it covers the subject of healing I was able to fully comprehend what the Scriptures had to say about God’s Will for healing as well as on whom He placed the responsibility to heal the sick. After months of relentless research and studying the Word of God, I had my answer to the “Why” question. I discovered that God loved us so much that not only had Jesus shed His blood for the forgiveness of every sin, He had also paid for the healing of every sickness and disease through the stripes that were laid across His back (see Psalm 103: 2-3 ; Isaiah 53:3-6  and 1 Peter 2:24).

I also realised that in Christ we have authority over sickness and disease and that God had given believers the responsibility to heal the sick (Mark 16:18 ; James 5: 13). As born-again believers we lack for nothing and are fully equipped to heal any sickness, raise the dead, cast out devils and cleanse the lepers. We do not believe in generational curses, and many other misconceptions such as, “It must have been some serious sin we had committed to allow the enemy access to take our son out.”

Witnessing miracles!
Armed with this new knowledge I stepped out with confidence and immediately began to see results. (Bear in mind that in 15 years of being a Christian, I had prayed for many sick people and had never seen one person healed)! This seems to be the testimony of most Christians I know. In the first week of praying for the sick with my new understanding of Divine healing, three deaf people were healed. Monique and I started praying about this new path God was leading us on, and though we both run our own businesses (Monique in landscaping and I run a microdot technology company combatting fraud), we felt that God wanted us to get more involved in John G. Lake Ministries.

We contacted Curry Blake who heads up the international ministry, and formed a relationship with him. Over the last 16 months we have witnessed close to 400 healings of just about every known sickness. We are excited about what the Lord is doing and though the pain of our loss is still very raw and very real but by the grace of God we are able to face each new day.