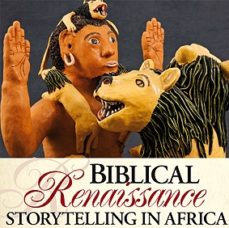 Biblical Renaissance: Storytelling in Africa
The story of Ardmore begins with Fee Halsted and Bonnie Ntshalintshali. Fee lived on a farm and noticed Bonnie, daughter of a farm worker with polio, couldn’t work on the farm because she could hardly walk. Fee, who worked regularly with ceramics, saw talent in Bonnie and asked her if she would like to learn.  Within five years the duo won the 1990 Standard Bank Young Artist Award. The artists were commissioned to create an exhibition for the following year. Bonnie created 12 ceramic pieces that told Biblical stories; one piece told the story of Jonah, the other Daniel and the lions den, the next of Adam and Eve, Joseph and Pharaohs Dream and so on.

Bonnie told Biblical stories through her sculptures through the use of stacking tiers as scenes. The first scene would begin at the base of the piece, and then the scenes would progress, each third telling a different part of the story, much like a media storyboard. However, neither Bonnie nor Hollywood claim the inventive right to storytelling through illustrated scenes. This form of storytelling echoes the method used in the early Christian art in the catacombs where Biblical stories were told in frames. Bonnie’s friends and family have since joined Ardmore.

Artists with a message
Arise Auction has the privilege of auctioning one of Ardmore’s most talented and inspired sculptor’s work, Petros Gumbi. His amazing creations have been exhibited all over the world and he has travelled with them to Kuala Lumpur and London where he participated in the Christie’s exhibition in January 2003, 2004, and 2007.

His ‘John Dunn’ historical sculpture was exhibited at the K.I.T. Trompen Museum in Amsterdam and in 2004 he was invited to participate with South Africa’s leading ceramicists in the prestigious Earthworks Claybodies exhibition in Stellenbosch.

Petros: Tell us the story of the vase that will be auctioned?
Like Bonnie’s pieces I have told a Biblical story through art. This vase is the story of Jonah: God sent Jonah to Nineveh and Jonah decided to go the other way. On the way he is swallowed by the fish and in the fish he turns his heart to go the same direction as God sent him.

In the waters the people represent the different tribes or nations that John the Baptist baptises and also turn their heart. At the top of the vase is Jesus, baptised with the Holy Spirit as a dove coming down and going up, arising. I did this piece for God not me. It is a ‘Jonahre’ vase telling the Truth from the Bible.

How does this story tell us about Jesus’ mission for the lost?
“As the people of different nations come to Jesus, kings and children and women of the nations come together as one, with love and the Holy Spirit, into the Body of Christ.” Biblically, the body of the vase, where the waters of the sea and the Jordan River merge, symbolises the people of the world uniting as one Body, through Christ’s sacrifice. The crowning glory of this piece is the dove descending on the head of Christ, the sign of Jonah and the sign of peace that Christ came to fulfil.

Fee: How do you see this commemorative Biblical renaissance piece also commemorating Bonnie and Ardmore’s Biblical storytelling beginnings?
Since Bonnie’s passing there are a select few artists who have emerged with as much passion and talent. This is a divine gift. Petros and Bonnie share a common faith in Christ and passion for telling Biblical stories. Ardmore is thrilled to have this opportunity to showcase storytelling from Africa through sculptural art. As a collectable recognised internationally we believe this piece will communicate its powerful message, much like Jonah, from Africa across cultures to foreign nations.

Africa’s storytelling can remind the Western world again of Biblical Truth, lived out in humility and appreciation as a family in the stories of the Bible.

Fee, do you feel Ardmore pieces can be labelled as ‘Jonahre art’ (Biblical storytelling through art)?
When we spoke about ‘Jonahre’ I remember relating so well. On a personal level, since the term is a play on the book of Jonah, I felt an instant connection as the artists have likened me to Jonah. On a practical level, I think it’s perfect to have a term for the pieces that tell Biblical stories, the Zulu culture is full of storytelling.

I have been awed how incredible Petros’ sculpture has turned out – it was as if God’s hand took over Petros’ hands giving him divine creativity. The Jonahre, Biblical storytelling pieces are so moving, there is no doubt that God is behind it and all that exists at Ardmore.

Participate in the art auction
Jonahre art is having a Biblical Renaissance. You are no doubt aware of this movement if you have been following JOY!’s series on the “Biblical Renaissance for Art.” Arise Auction will be celebrating this renaissance in conjunction with Desert Star Studios by auctioning off commemorative pieces as well as selling affordable replicas. The proceeds of the auction will go towards art initiatives within the global Church and compassion ministries within Africa.

To be part of this movement, go to www.jonahre.com and view the stunning pieces of work that have been created.