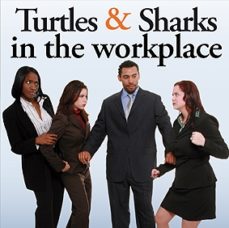 Turtles and Sharks in the Workplace
Workforce diversity is a blessing and challenge! In my work as a business coach, one of the most regular conversations revolves around the issue of conflict management. South Africans are blessed, but also challenged ,by an immensely diversified workforce, which often results in misunderstandings, different expectations and values – hence fertile ground for much strife!

The conflict profiles
Johnson (1986) describes five metaphorical conflict styles that people adopt when faced with confrontation, of which the ‘ferocious shark’ and the ‘meek turtle’ are the opposite extremes. We all know ‘sharks’ who always aim to be winners in any confrontation. They use tactics like attacking, overpowering, overwhelming and intimidating others, and are not concerned with the needs of the other party in the ‘war’. This is essentially an aggressive communication style, resulting in ‘win-lose’ outcomes.

At the other end are the meek little ‘turtles’ who withdraw into their shells to avoid conflicts at all cost. They see conflict as being destructive, and thus a threat to relationships. The person who has a passive communication style, thus never voicing an opinion and always ‘escaping’ is a perfect example. Turtles use avoidance strategies like leaving the room, outward submission and compliance, and the ‘silent treatment’ to deal with confrontation – never believing that there is a possibility for a good outcome. Another win-lose example!

Fear of man
Interestingly, both ‘sharks’ and ‘turtles’ usually fear conflict – they just respond to it differently! The one thinks that overpowering the ‘enemy’ would get the conflict out of the way soonest, whilst the other runs to the ends of the earth if necessary to avoid being drawn into a confrontation.

The underlying motivation of both these styles is the fear of man, something we as Christian’s are warned against in Proverbs 29:25 “Fear of man will prove to be a snare, but whoever trusts in the Lord is kept safe”. A great role model is Jesus himself. Although He was the personification of a loving, caring servant, He never shied away from confronting others with the truth.

A paradigm shift is needed
Not all conflict is bad and to be avoided. In fact, constructive conflict is necessary for continued development and creative problem-solving, as it provides energy for growth. Conflict is also seen as an important characteristic of teams, ensuring creative problem-solving and as a prerequisite for cohesion. Thus teams that can confront each other constructively will have more team solidarity and loyalty to each other, as well as better output, than those with destructive conflict behaviours.

The ‘how-to’ of conflict
Johnson’s ‘owl’ is seen as the ideal conflict style. Owls view conflicts as opportunities for problem-solving and always go for win-win solutions. They are generally not satisfied until a solution is found that achieves the goals of both parties, and until the tensions and negative feelings have been fully resolved.

From Scripture we see that we should love other people as oneself (Lev 19:18; Mat 19:19) and behave according to the fruit of the Spirit (Gal 5:22), seeking each other’s well-being before thinking of our own needs. Our attitude should always remain one of respect and love towards others, no matter how we disagree with someone else. We are to serve each other (Gal 5:13) and not harm another in any way whatsoever (Rom 13:10; Rom 15:2).

The assertive person would give his or her opinion truthfully, but with tact and love, to preserve both the rights of himself and the other party. Other guidelines include:

Respect others and their opinions
Be assertive, say what you think and need, be honest
Collaborate with others, don’t see them as the ‘enemy’
Work towards solving problems instead of blaming people
Go for win-win outcomes, even if you have to compromise
Forgive others for their offences against you.

Labour relations are another minefield of conflict and strife in the workplace, where both parties, employer and employee, focus on their own interests without regard for the others.

From a Christian perspective the prevailing attitude from all involved should be one of fairness towards others. Employers should treat employees with fairness concerning their wages (1 Tim 5:17-18), living conditions, work environment etc. In return employees should be loyal, submissive and fair towards the employer in doing the best job that they are able to do.

But even if the other party can be considered your enemy, Jesus still guided us toward forgiveness and love “But I tell you: Love your enemies and pray for those who persecute you, that you may be sons of your Father in Heaven.” Matt 5:44