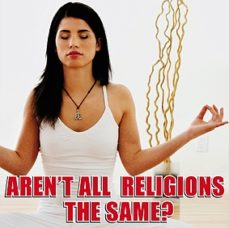 Skeptics Answered: Aren’t All religions the Same?
What is the difference between Christianity and all other religions? Time and again we hear people say: “All religions are the same! Why do you insist that yours is the only right one?”

“How can you be so narrow minded, bigoted and intolerant to believe that
Jesus is the only way to God?”

The new tolerance
In this decadent and immoral society the main virtue seems to be tolerance. And the worst vice is intolerance. However, what they mean by tolerance is something very different to what tolerance used to mean. Today tolerance has gone beyond what any previous generation would have understood to be acceptance and approval of deception and depravity.

The New Age tolerance seems to come to a screeching halt when confronted with Biblical Christianity. Any Christian who dares to stand up for basic Biblical beliefs is accused of intolerance! It seems a bit hypocritical of those who claim that all religions are right that they spend so much time declaring that Christianity is wrong. And they do seem to be very intolerant of Biblical doctrine…

Contrasts and contradictions
Yet, to those who claim that all religions are the same and all religious teachers basically teach the same principles, we need to point out to them what these religions actually do teach:
The Baha’i religion has formalised the New Age spirit into a religion which incorporates all other religions. The Baha’i claim that all religions are the same and they claim to follow Jesus Christ, along with Buddha, Lao-Tzu, Confucius, Muhammad, Zoroaster and whole hosts of other gurus, ‘prophets’ and ‘holy men’.

Islam stands for a strict monotheism. They are adamant that there is only one God. However, Hinduism is polytheistic, recognising at least 330 million gods. How can monotheism and polytheism be the same?

Buddhism is pantheistic teaching that everything is god. Confucius recognised no god. How can Atheism equal Pantheism equal Polytheism equal Monotheism? It cannot!

Life vs Nirvana
Jesus Christ said that He came that we may have life and have it more abundantly (John 10:10). However, Hinduism and Buddhism teach that life is a great evil. These religions teach that we should be seeking for an end to all personal life through ‘Nirvana’. As a drop of water falls back into the ocean and loses all individuality, so, through successive reincarnations and meditation, we should seek the cessation of personal consciousness.

As Buddhism and Hinduism regard life as miserable (that is something of a self-fulfilling prophecy as paganism always tends to make life quite miserable) their goal is the extinguishing of life. How can Christ’s teaching about Spiritual Life, Eternal Life and Abundant Life be the same thing as ‘Nirvana’?

Incompatible ethics
Then there are the issues of ethics. Most religions teach polygamy – that a man may have numerous wives. Christianity has always stood for monogamy: one man married to one woman for life. Christ condemned divorce. Muhammad allowed for easy and quick verbal divorces. These two positions are incompatible.

Fellowship with demons
The Apostle Paul taught: “Rather, that the things which the Gentiles sacrifice, they sacrifice to demons and not to God, and I do not want you to have fellowship with demons.” 1 Cor 10:20
The Scriptures are clear that God is not pleased with all types of religious activity. The most condemned sin throughout the Scripture is that of idolatry. Most of the religions of the world are steeped in idolatry.
“Professing to be wise, they became fools and changed the Glory of the Incorruptible God into an image made like corruptible man.” Rom 1:22

Beware of religious deception
Jesus warned us of false prophets (Matt 7:15), false teachers and false shepherds (Matt 23). “Take heed that no one deceives you.” Matt 24:4.

In the book of Revelation we are told that at the end God will send an Angel to bind satan “So that he should deceive the nations no more …” Rev 20:3. Plainly satan is deceiving nations today. We are involved in a colossal conflict, a world war of worldviews:
•    Atheism vs Theism
•    Polytheism vs Monotheism
•    Communism vs Christianity
•    Sharia law vs God’s Law
•    Polygamy vs Monogamy
•    Slavery vs Freedom
•    Abortion vs Pro-Life
•    Pornography vs Morality
•    Homosexuality vs Family Values
•    Disease vs Health
•    Lies vs Truth
•    Poison vs Purity
•    Death vs Life

Religions are man trying to reach up to God. Christ is God reaching down to man. Religions come from man. Christianity comes from God. Religions say: Try!
Christ says: Trust!

We, as Protestant believers believe in freedom of conscience, freedom of speech, freedom of association, freedom of worship. The Protestant Reformation gave birth to the very concept of religious toleration. However by tolerating the practice of other religions we are not saying that they are equally valid or true. That modern, New Age concept of tolerance is not what the word has historically meant.

However, the differences between Christianity and all other religions is more than the way we look at everything and everyone, reality and responsibility, salvation and discipleship. It is much more than the truth about God, man, eternity and salvation. It is even more than life, both life here and now, and life in the hereafter. The chief and most critical difference between Christianity and other religions is our understanding of the Holiness of God and the seriousness of sin.

The Atoning work of Jesus
What is absolutely unique about Christianity, among all the religions of the world, is its central doctrine of a once for all, never to be repeated, substitutionary Atonement. Jesus Christ is the Lamb of God who takes away the sins of the world. His sacrificial death on the Cross made Atonement for our sins and made possible the redemption of His people. Other religions either have a lower view of God’s Holiness or a lower view of the seriousness of mans’ sin, or both. Only Christianity maintains the balance of God’s perfect Holiness and merciful love.

The crucial question is: how can a Holy God reconcile sinful and depraved people and still maintain His justice? Only someone who was sinless could be an atoning sacrifice and only God Himself, coming as a man, could be that perfect sacrifice.

The life of Christ
Other religions are based on the teachings of their founders. Christianity, however, is based on its founder’s life. At the core of the Apostles Creed is Christ: “Our Lord Jesus Christ, conceived by the Holy Spirit, born of the Virgin Mary, suffered under Pontius Pilate, was crucified, He died and was buried. He descended into hell. The third day He rose again from the dead. He ascended into Heaven, and is seated at the right hand of God, the Father Almighty; from there He shall come to Judge the living and the dead.”
Celebrating Christ

That is why the great festivals of the Christian Faith are: Christmas, Good Friday, Easter and Ascension Day. Christmas celebrates the Incarnation of God in human flesh, Emmanuel, God with Us; Good Friday, the atoning death of the Son of God for the sins of the world; Easter the victory of Christ over death, hell and the grave through the Resurrection. “I am He who lives, and was dead, and behold, I am alive forevermore. Amen. And I have the keys of Hades and of death” Rev 1:18

Above all authorities
The Ascension proclaimed the Lordship of Christ over all human institutions and authorities. Christ “has gone into Heaven and is at God’s right hand – with angels, authorities and powers in submission to Him” 1 Pet 3:22 “All authority in Heaven and on earth has been given to Me, therefore go and make disciples of all nations…teaching them to obey everything I have commanded you…” Matt 28:18-20 “For He must reign until He has put all His enemies under His feet.” 1 Cor 15:25 “Therefore, since we have a great High Priest who has gone through the Heavens, Jesus, the Son of God, let us hold firmly to the Faith we profess.” Heb 4:14

“Therefore God exalted Him to the highest place and gave Him the Name that is above every name, that at the Name of Jesus every knee should bow in Heaven and on earth and under the earth, and every tongue confess that Jesus Christ is Lord, to the Glory of God the Father.” Phil 2:9-11

The uniqueness of Christ
Jesus Christ didn’t claim to know the way, He is the Way. Jesus didn’t just teach the truth, He is the Truth. He does not just have life, He is the Life.
Confucius did not die for the sins of the world. He did not even believe in sin.

Only Jesus Christ lived a perfect life, died an atoning death and rose from the dead. Confucius, Buddha, Muhammad, and all the rest, died, are buried and have never been heard from since. However the Resurrection of Jesus Christ from the dead is a unique historical fact.

The lifesaver
All humanity is drowning in an ocean of sin. The religions of the world are throwing out swimming manuals and seeking to give the drowning some instructions on how to swim. However, Jesus Christ is the Lifesaver who has plunged into the ocean to rescue the perishing, at the expense of His own life.

“Nor is there salvation in any other, for there is no other name under Heaven given among men by which we must be saved.” Acts 4:12

“Therefore God also has highly exalted Him and given Him the Name which is above every name, that at the Name of Jesus every knee shall bow, of those in Heaven, and of those on earth, and of those under the earth, and that every tongue should confess that Jesus Christ is Lord, to the Glory of God the Father.” Phil 2:9-11

The first time He came as the Lamb of God who takes away the sins of the world. The second time, when He comes again, He will not come as a Saviour, but as a Judge, as the King of kings and Lord of lords, a conqueror, the eternal Judge.

Is Jesus your Saviour, or your Judge?
Jesus Christ is the Way, the Truth, and the Life. No one comes to the Father except through Him.