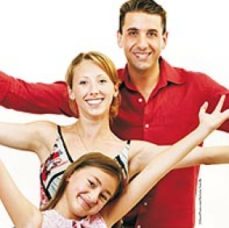 The Strength of the Family

WHAT is the best investment you can make into your family? What is the best insurance you can take out on your marriage? What is the best gift you can give your children? Mounting secular research is confirming what Bible-believing Christians have always known—one of the best investments you can make into your family is to worship together. Patrick Fagan, a clinical psychologist, family therapist and former Deputy Assistant Secretary of Health and Human Services during the Bush Administration, has done much research into the relationship between family, community and social problems. One of his findings is that: “Religious worship … has been linked to health and happiness as well as longer marriages and better family life.”

What has happened in the United States of America offers a powerful warning to Christians everywhere. The warning: Abandoning Biblical principles and abandoning worship destroys family life. Studies of American family life indicate a terrible breakdown of the family. There appears to be a strong link between the breakdown of the family unit and the loss of Christian values in America. During the twentieth century, the Biblical Christian foundations of the nation were steadily chipped away. The country that once based its laws on the Bible now sanctions abortion on demand and outlaws prayer in public schools. Today, the laws and values of the United States have moved so far from the Bible that many call it a ‘post-Christian’ nation.  The move away from Christian values has torn family life apart. The divorce rate rose steadily throughout the twentieth century. For example, between 1940 and 1980 the US Census Bureau reported an alarming increase in the divorce rate—300 percent.    In 1940, 1 in 6 marriages ended in divorce.  By 1977, 1 in 2 marriages ended in divorce.

Living together emerged as a popular view of how to ensure that you and your partner are compatible and, therefore, likely to have a lasting marriage. In previous generations, living together was considered sinful and shameful.

Today even Christians think trial marriages are necessary. When my wife and I were engaged, a friend from church asked with shock in his voice, “Are you really going to get married as virgins? How do you know you are compatible?”

Yet research conducted by the Barna Foundation has shown that living together before marriage increases the likelihood of divorce.

Divorce destroys children’s lives. The harmful effects of broken homes on children and youths are well documented. In 1988, Judith Wallerstein, director of the Centre for the Family in Transition, after 15 years of research, reported that: “Almost half of the children of divorces enter adulthood as worried, underachieving, self-deprecating, and sometimes angry young men and women.”

As divorce rates increased, so did major problems among teenagers.  During the second half of the twentieth century, premarital sex among girls increased 500 percent, unwed pregnancies 400 percent, gonorrhoea 200 percent, and suicide 400 percent.

Research amongst school teachers showed that the biggest problems they faced changed dramatically between 1940 and 1980.

While it would be naïve to think that divorce was the only cause of these shocking figures, many family counsellors regard it as the biggest single factor.  These may not be South African statistics (although they would be quite similar), but they have a clear message for us: Loss of Biblical faith leads to a breakdown of the marriage unit, which has terrible consequences for children.

The good news is that there is a simple but powerful way to protect your family against these trends.  Families that worship are families that work.  Research indicates that Christian families have a powerful tool at their disposal.

Using it dramatically increases our chances of healthy marriages with well-adjusted children. That tool is family worship.  A study by Dr George Crane indicated that when a husband and wife are active together
in the same church, they are 50 times less likely to divorce. He also found that in homes where there are regular family devotions, only one in 500 marriages ends in divorce.

Even psychologists and social scientists, such as Patrick Fagan and Robert Rector, realise that: “Religious worship … has been linked to health and happiness as well as longer marriages and better family life.”   They note that: “Church attendance is the most significant predictor of marital stability,” and go on to discuss the amazing benefits of regular worship on family life. What are the benefits of regular family worship?

The first benefit is stable, lasting marriages. It’s true: Families that pray together stay together.  This is the foundational benefit because all the other benefits depend and build upon it.

Another benefit is loving, encouraging, secure homes.  A 20-year study of what causes some couples to stay together and other marriages to break up found one common denominator—among couples who would ultimately stay together, less than 5 out of every 100 comments made about each other were putdowns.  Among couples who would later split, 10 or more out of every 100 comments were insults. Couples who worship together are more likely to speak blessings than curses over each other and their children.

The result: A home where children feel secure because they are loved and valued.  This leads to our next benefit: Children who grow up in loving homes tend to have a positive self-image.

Lots of affirmation and affection teaches them they are valuable, lovable, important. As a result, they manage their emotions better. Boys handle conflict better and are less prone to violence than boys from broken homes, while girls who experience healthy love and affection from their fathers are less likely to loose their virginity—which often happens out of a cry for love and belonging.

A fourth benefit is a positive outlook on family life.   As compared with children from broken homes, children who experience healthy family life are more likely to marry, as opposed to just living together, have higher expectations of marriage, are less likely to get divorced and have a greater desire to raise children.


Next, there is a direct relationship between home life and work performance. Men and women who enjoy a low-stress, high-support family life excel at work and, according to research findings, earn higher salaries than those who are unhappy at home.

For example, one study of 1365 corporate vice presidents revealed that 87 percent were still married to their one-and-only spouse and that 92 percent were raised in two-parent families.

The previous point leads us to the next benefit: Children from two-parent homes show a greater capacity to learn than those from broken homes. The emotional trauma of a divorce (or conflict at home) severely compromises children’s ability to learn.   On average, therefore, children living in stable, loving homes score higher marks at school, are three times less likely to need disciplining and twice as likely to graduate. In later life, they will, as a rule, earn much higher salaries.

The last benefit I shall mention here is that: Children are much less likely to abuse alcohol or use drugs if their parents have a good marriage.  According to Fagan and Rector, “Comparing all family structures, drug use in children is lowest in the intact married family.”

Why the difference? Alcohol and drugs provide an escape from reality, a way of numbing the senses. When home life is full of peace and belonging, there is no need for an escape. Fagan and Rector (2003) conclude that a “drop-off in worship has serious consequences because religious practice has been found to have beneficial effects on such factors as  physical and mental health, education level, income, virginity, marital stability, crime, addiction, and general happiness.

Church attendance is the most significant predictor of marital stability; it is closely related to sexual restraint in adolescence.  Regular worship, more than religious attitudes or affiliation, is associated with lower crime rates and lower rates of use and abuse of alcohol and illicit drugs.   Religious worship is associated with better health and longevity, reducing the risk of suicide, both in America and abroad.”

In conclusion: Families that worship together regularly, in a local church and at home, enjoy much healthier relationships than families that don’t. As a result, they reap a rich harvest of spin-offs from it. Worshipping together greatly reduces the likelihood of divorce, improves the atmosphere at home and tends to produce secure children with a good self-image. Children from secure, two-parent families engage in less destructive behaviour, fare better at school, excel at work and, in turn, make better husbands and wives, fathers and mothers.

Worshipping together is one of the best investments you can make into your family’s well-being. If your family worships together, do not underestimate the power of what you are doing; It’s impact on your family will be beyond measure.  If your family does not worship together, you are missing a great opportunity to enrich your marriage and shape your children’s destiny.

Why not start today?