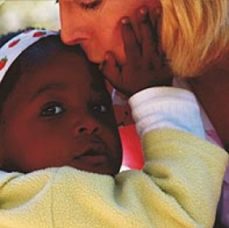 The Colour of Love

A giggling little girl, full of life, bounces into the room.  Her eyes are sparkling and bright, and focussed on one thing:  mom. She is completely devoted to the woman who has raised her, and it is plainly obvious that ‘mom’ adores her right back.  It doesn’t matter to either of them that one is black and one is white.  That one is HIV+ and one isn’t.  To both of them, it all comes down to one common denominator, love.

When praying about the vision the Lord had for their family, Dan and Allie de Villiers felt that they wanted to reach out to other children.  Seven months after their decision, Allie and her youngest daughter, Frances, volunteered their help in the gardens at Temba Care Group, an AIDS hospice.  Frances was immediately drawn to the children and wanted to help wherever she could.  Just 8 years old, she started raising funds for Temba Care by selling paper bags.  She challenged friends at school to raise funds, and at the same time she established a relationship with Temba Care by spending
time with the children.  It was here that she met a little orphan, Zanele, for the very first time.

Temba Care phoned Allie one day and asked if she knew about anyone who would be willing to take care of a baby girl.  There was no longer space for her as she had been at Temba Care too long, and she needed love and care while she was alive.  She was infected with HIV and had already started showing symptoms of full-blown AIDS.  The 14 month old baby was weak, sick and abandoned.

When Allie heard about the baby she immediately felt that the Lord had called her to take Zanele in.  However, her husband thought it wiser to stick with the 3 children they already had.  Also, the risk of bringing an HIV+ baby into their home was high.  Yet, he also felt the tug from God on his heart
strings.  They took two months to make the difficult decision to take the baby into their
home.  They made the decision wisely, consulting their daughters, their parents and their closest friends.  They kept it as private as possible, and only sought the guidance of those nearest to them.

Although a lot of the feedback was negative, more and more they knew the Lord had called them to love this little girl.  They prayed for His guidance and for His will to be revealed.  This was not an emotional decision taken on the spur of the moment; it was a prayerful act of obedience.

The most important part of their decision was having the consent of their 3 daughters.  They were each given personal time with a psychologist to discuss their feelings about taking in a baby that is HIV+.

Sarah-Jane, who was 10 at the time, had thought about it very carefully.  Her only reservations were that their home and car would be “crunched”, meaning that she felt there wasn’t enough space for another child.  She was also afraid that she wouldn’t be able to go to boogie board competitions because she would need to be taking care of the baby.  But she ended by saying that she felt this baby would teach her so much.

Frances, who was 8 years old, had a deep faith.  She was the only one who had met Zanele.  When asked how she felt about taking this baby into their home, she answered, “You know what, she has AIDS and she is going to die.  But we are going to love her to death.”

The eldest daughter, Katherine, who was 12, was apprehensive about the idea. Her grandmother had recently passed away and  she had loved her with her whole heart.  When she died she didn’t think she would ever get over it.  She worked out that as much as you love somebody, that is how sad you are when they go.  Her fear was loving this baby so much only to lose her.

In the end, as a family, they decided to care for Zanele.  Before they brought her home they informed the childrens’ school and prepared their children for the fact that they might not be able to have friends come over to play at their house.

They also found out as much as possible about AIDS, and went to see a nurse who explained to them exactly how AIDS was transmitted, how the home would need to change, and what precautions they would need to take.  For example, if the baby was to start bleeding, you could only touch her if you were wearing gloves.

As a family they decided that Zanele’s name
needed to change.  She couldn’t come into their home with a name that meant ‘enough’.  She was worth much more than that.  They named her Lily, which means ‘pure and beautiful flower’.

Allie bonded with Lily the minute she was placed in her arms and, from that moment, treated her as her own daughter.  Initially Lily only responded to Allie, and to this day, Allie is her rock and support.  She has only recently started to trust anyone else.

For 5 months after Lily came home, Allie questioned the Lord every day:  “Did I make the right decision?  Did I hear You correctly?

Is this really Your will for our lives?”  It was an incredibly difficult road. They never knew how long they had with Lily, they only knew that God wanted them to love her.

When Lily arrived she was very sick and didn’t respond to love at all.  Allie was her primary care giver, bathing her and feeding her.  Although the children were keen to help her, they initially had to keep their distance, simply for safety sake.

Lily bled a lot in the first couple of months.  She had a terrible lung infection and would wake up with blood and mucus all over her little face.  Her bottom was also raw and bleeding from a nappy rash that wouldn’t heal.  With no immune system to protect her, the fragile child was getting sicker by the day.  She also had a carbuncle removed from her leg and it had left a huge open wound.  She had thrush throughout her system and had never eaten solids in her life.

Perhaps the saddest part of all was that Lily was tactile defensive; she hated to be touched and wouldn’t reach out. She avoided eye contact and would hardly ever cry.   She had become so institutionalised that when she woke up in her cot she would just lie there and wait for you to come to her, she never cried.  Lily had never bonded with anyone in her life before and did not know how to respond to love.

Lily received all the love the family could lavish upon her.  They consulted the best nutritionists, not a single vitamin or trace element was missing from her diet.  She was force fed a complex diet every day.  Yet, with all the love and good nutrition she received, she only gained 300 grams in 5
months.  It was evident that she needed medication.

In order to administer anti-retrovirals you need to be committed.  They need to be given at approximately the same time every 12 hours.  They need refrigeration, exact measurements need to be calibrated and changes are made to the dosage every 3 months.


This is the role that the de Villiers family, with the help of the Lord and fervent prayer, were prepared to take.  They wanted to give Lily a happy life, to care for her through her illness, despite the fact that she doesn’t have a full life expectancy. They have no idea how long Lily has, they just know that they are making a difference in her life.

When the Lord calls you, He provides everything you need to fulfill that calling.

The support that this family has received is phenomenal.  They have not done it with their own strength, but by His alone.  God has put just the right people in place to help the de Villiers family. There is a physiotherapist, Leanne Keet, who came twice a week for 5 months to help Lily learn to walk.  The children absolutely adore her and call her “the angel”.  She has truly been an angel by helping Lily to walk, because even at 16 months, she was only able to roll over.

Another family, who pioneered the process of adopting an HIV+ baby 6 months before they did, have been a huge pillar of support to them.  Having done it all themselves, they are always available to offer guidance, and have been outstanding mentors to Dan and Allie every step of the way.

There is also a bond between the 2 babies who go to the same school.  Allie’s best friend is a doctor who cares deeply for Lily and is always available to answer questions and offer support.

There has never been a negative or hostile reaction to Lily, even at her sisters’ school.  They haven’t been teased or ridiculed about their sister.  In fact, the teachers, ground staff and children of Lily’s pre-school are all tracking Lily’s progress. The support of all their friends and family has been incredible.

Financially, they have received tremendous support.  All the anti-retroviral medication from the hospital is free and their medical aid has fully accepted Lily as Dan and Allie’s dependant.  She has the same medical benefits and is also on the fund’s AIDS program.

Since she has started taking her medication she has never had an injury that caused her to bleed.  They stand amazed at how the Lord has protected their entire family.

The medication is supposed to cause side effects, but she has shown none.  She knows she needs to take it and it has become a way of life.  She never questions why, she just happily takes it.

She has a healthy appetite now and goes to pre-school.  She is as happy as ever and is reaching out for love.  Allie says: “Lily has never asked about the difference in colour, why she is black and we are white.  It doesn’t matter to her or us that she is different.  We tell her every day that she is our special gift from God.  It has been amazing to watch an ill, damaged, wilting baby blossom into our Lily, so full of life and joy.  Having her in our lives has brought us so much joy.  Wherever she goes she makes people smile.”

The whole family has bonded with Lily, and she has a particularly close relationship with Frances, the one who had such a heart for her from the beginning. By openly communicating and praying with all their children every day, there is no room for resentment.  The children all love each other dearly.

Despite the legalities, the de Villiers family hope to officially adopt Lily in October this year.

Both Dan and Allie’s parents who were initially skeptical, have grown to absolutely adore Lily.  She calls them ‘granny’ and ‘grandpa’.  “Lily de Villy” as she calls herself, has become the fourth daughter in the family and will receive all the same privileges.  She will go to the same private schools and will be given the same opportunities.

When asked about how they feel about not knowing how long they still have with her, the entire family stands in agreement.

They know that the Lord has a plan for their lives and that Lily was placed as part of their family for a reason.

Every day they wake up and thank Him for the gift He has given them, and they follow the calling He gave them in the beginning, to love her with all of their hearts.