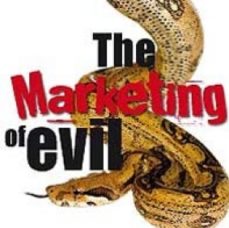 The Marketing of Evil

What’s happening to the world? Media madness, gay rights, youth trends… what is really going on? What’s happened to the Christian values that societies were once built on? You may not believe how deep the rabbit hole goes.

For prominent editor and writer, David Kupelian, “The plain truth is, within the space of our lifetimes, much of what (we) once almost universally abhorred has been packaged, perfumed, gift-wrapped and sold to us as though it has great value. By skilfully playing on our deeply felt values of fairness, generosity and tolerance, marketers have persuaded us to embrace as enlightened and noble, that which previous generations regarded as grossly self-destructive – in a word, evil.”

Perverted propaganda
All around our nation (and globally too) Christian values are being undermined by media propaganda. Sex, drugs, gambling, greed and alternative lifestyles are glamorised and subtly (but very strategically) normalised. According to Fox News anchor and commentator, Michelle Malkin, the media is deliberately eroding traditional values. She remarks, “From pitching promiscuity as ‘freedom’ to promoting abortion as ‘choice’, the marketers of evil are always selling you something destructive – with catastrophic results.”

Over the last 20 years (some would even say within the space of 10 or 5 years) the media and marketers of evil have methodically and aggressively promoted anti-Christian and immoral agendas. Generally, it is propagated under the guise of ‘political correctness’.

Perhaps because of the wonderful newfound liberties that have swept across the Western world in recent decades, few are willing to criticise it for fear of accusations of intolerance and bigotry. Whatever political correctness (or ‘PC’) is, it seems to be seriously compromising many of our traditional Christian values, not to mention basic democratic freedoms of thought and expression.

Big Brother is watching you
What do we make of the undercurrents of the modern age? Perhaps the best place to start is with ‘Political Correctness in South Africa’, a recent work based on a conference held by the SA Institute of Race Relations (SAIRR), one of the most respected liberal institutions in the country, and for many years in the forefront of the fight against Apartheid.

Interestingly enough, the conference (attended by many of the most respected liberal figures in the country) was roundly critical of PC, condemning it as intolerant, anti-liberal and even a form of fascism. Economist, Temba Nolutshungu, calls PC “a form of moral terrorism”. For Australian statesman, Peter Coleman, PC is “a heresy of liberalism” – that is, something that looks like liberalism, but actually works against it. According to former DA leader, Tony Leon, it is “a form of cowardice, fuelled by paternalistic instincts and fed by guilt.” What this means is that PC is something both the conservatives and liberals need worry about, despite the fact that it is often passed off as mainstream liberalism.

PC has strong Marxist roots, with the term originating in Communist Russia in the 1920’s. In one early record, for instance, the term ‘politically incorrect’ was applied to those who did not tow the Communist party line. As the SAIRR conference pointed out, by the Sixties Marxism, as an ideology, had successfully infiltrated the West on a deeper, less obvious level. Few realise how Marxist ideas were embraced by leading Western intellectuals and key figures who gradually started to impact every area of society, whether politics, the law, the media, and yes, even the Church.

“There is a revolution coming. It will not be like revolutions of the past. It will originate with the individual and with culture, and it will change the political structure only as its final act. It will not require violence to succeed and it cannot be successfully resisted with violence. It is now spreading with amazing rapidity and already our laws, institutions and social structures are changing in consequence,” says Yale legal scholar, Charles Reich.

It is these Sixties, Marxist ideals that ultimately became what we today call ‘political correctness’. Few realise how many ‘fair-minded’ notions we take for granted – and which might look and sound like democracy, but are actually Marxist in origin. Marxist/PC ideals include: hostility to the idea of absolute truth, to traditional family values and conventional schooling, and even the promotion of radical feminism and a ‘new pornography’.

It is no coincidence that many early feminist and gay rights activists were Marxists at heart, who applied the false Marxist version of ‘equality’ to their own interests. For feminists this meant rejecting the Biblical idea of man as head of the family (which implies one having authority over another); while for gay liberation it meant putting the homosexual lifestyle on the same (‘equal’) level as the heterosexual (‘straight’) lifestyle. Therefore PC is also opposed to the view that Jesus is the only Way to God, for this implies that Christianity is superior to other religions.

Growing opposition
Does this all sound a bit like a conspiracy theory? Can a few elite power players really manipulate the masses? Is the media really this powerful? Former US Attorney-General, Robert Bork, is surely above petty accusations of conspiracy theory. In numerous writings, he exposes the current system as run by a small group of ‘cultural elites’ who, having infested politics, education, and even the Church, are ignoring the democratic desires of the majority and “exercising a profound if largely unseen effect on public policy.”

As Christians, we know the PC spirit all too well. We live in a society where anyone who has problems with gay rights is shouted down as ‘intolerant’ or ‘homophobic’, and where film and TV alike persistently portray those who oppose feminism, gay rights or abortion as a mindless, irrelevant minority.

Yet local surveys persistently prove the opposite. According to a 2003 survey of the Human Sciences Research Council, 75% of South Africans want capital punishment reinstated, while only 21% believed that abortion is ‘not wrong at all’. A recent survey by RS, the country’s leading marketing insights company, revealed that only 21% wanted same-sex marriages legalised. Despite claiming to be opposed to stereotyping social groups, therefore, the politically correct succeed in falsely stereotyping the majority of their own people. The irony is that those who call themselves tolerant are often the most intolerant of all. Often the plea for tolerance is really a means of pushing one’s own agenda, silencing opposition through guilt-manipulation or intimidation.
The Biblical response
As children of God, we must remember that we are in the world but not of it. We work and live by a different set of standards – those of the Spirit.  “If we live by the Spirit, let us also walk by the Spirit.” Gal 5:25. We cannot walk around with blinkers on and think that we are unaffected by television, movies, magazines, books, advertising campaigns, political speeches and the like. At JOY! we strongly believe that Christians need to be on TV, and be informed, educated and equipped to proactively and effectively address unbiblical agendas. Passivity and apathy are not part of a Biblical vocabulary. When you see offensive adverts and hear sexually proactive songs on the radio…do something. Complain. Take a stand. Educate others. Refuse to compromise. Protect your family. And do it all in love, as Christ Himself would.
In the next few issues of JOY! we will be analysing and exposing the marketing tactics used by companies and individuals to subversively erode family values and Biblical principles. There are practical steps we can take to combat the aggressive agendas of those who are hostile to the ways of God. It starts first with prayer and offering ourselves as a living sacrifice. “I appeal to you therefore, brothers, by the mercies of God, to present your bodies as a living sacrifice, holy and acceptable to God, which is your spiritual worship. Do not be conformed to this world, but be transformed by the renewal of your mind, that by testing you may discern what is the Will of God, what is good and acceptable and perfect.” Rom 12:1-2
“Greater is He in you, than he in the world!” 1 John 4:4