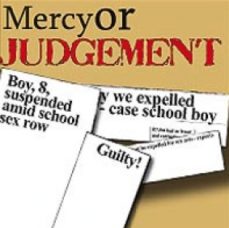 Mercy or Judgement – What is The Christian Response to Sin?

Most South Africans are traumatised by the crime statistics and more recently the spate of child-instigated violence and sexualised behaviour. JOY! readers in the Western Cape are probably aware of a shocking story recently circulated in local newspapers. (See headlines right). Basically, a furore erupted when an eight year old boy was suspended from a prominent school in Cape Town for committing heinous sexual acts on school property on various occasions. The child (who it later emerged comes from an underprivileged background) was suspended from the school and charged by the governing body for “assault” and “guilty conduct which is disgraceful, improper and unbecoming”. The child involved three other young boys in these acts and “threatened to kill them if they told anyone what had transpired.”

Further details listed in local newspapers are too explicit for me to mention in JOY!, but suffice to say that the perverted acts indicate a serious moral and sociological breakdown in the mind and conscience (soul) of this boy. The drama intensified however, when in a shock move, the Western Cape Education Board overturned the school’s suspension and decided to reintegrate the primary school pupil – stating that due to his age, home environment and social conditions he cannot be held responsible. In spite of this, the school has launched an urgent application to the Cape High Court to prevent the suspended pupil from returning.
Obviously embarrassed and outraged, the parents of the boy have cited discrimination and defamation. In a lawyer’s letter to the school, the father stated, “My child is a victim of circumstances stemming from the things that happened to him at the aftercare. He’s been a victim from day one.”
In the midst of this faction between the parties, other parents at the school are outraged at the possibility of the sexually deviant boy interacting with their children during school hours.

I am sure that many parents reading this article will breathe a sigh of relief that this isn’t happening at their child’s school. Unfortunately, research and social trends indicate that child-violence and sexual deviancy is on the increase and can affect anyone from varying socio-economic backgrounds. A concerning problem indeed.

So, what is the Christian response to this pervasive and intrusive sin?
A typical response would be anger, outrage and judgment. Parents have every right to want the boy expelled and ‘removed from society’ at least until he ‘undergoes therapy’. There is one flaw with this reaction though – Jesus, our example in everything, would not outcast the boy, leaving him helpless in his sin. Jesus would love the boy and lead him into a life pleasing to God. We as disciples of Christ are called to do the same. Though we live in a fallen world where sin abounds and (it appears) society is doing what they can to undermine Christian value systems, God has placed us here to be the salt and light to preserve the Gospel and the Will of God within a decaying culture.

“If you show favouritism, you sin and are convicted by the law as lawbreakers. For whoever keeps the whole law and yet stumbles at just one point is guilty of breaking all of it…Speak and act as those who are going to be judged by the law that gives freedom, because judgment without mercy will be shown to anyone who has not been merciful. Mercy triumphs over judgment! What good is it, my brothers, if a man claims to have faith but has no deeds?” James 2:8-13

In His Word, God tells us that mercy triumphs over judgment and that if we have faith but no deeds, it is dead! In other words, that we as Christians and as parents, would need to help this boy (and others in a similar situation). Though it is beneficial for him to receive counselling, only Jesus can replace his sinful heart. “I will give you a new heart and put a new spirit in you; I will remove from you your heart of stone and give you a heart of flesh. And I will put my Spirit in you and move you to follow my decrees and be careful to keep my laws.” Ezek 36:26-27

Christian counselling would be the ideal route to follow, as they would deal with not only his soul (mind, will and emotions) but his heart as well, for we know that: “the heart is deceitful above all things.” Jer 17:9.  Most probably due to his socio-economic status, the boy could not afford professional counselling and this would be a perfect opportunity for Christian parents to unite in love and sponsor his therapy. The boy also would need positive role models and mentors and that’s where the Christian parents and children in the school would need to step up to the plate and get involved.

With sexual perversion and sin abounding in these last days, let us as the Body of Christ, the hands and feet of Jesus, rise up and help those who cannot help themselves. God has commanded us to “occupy until He returns” which means that we cant simply turn a blind eye to the problems of others – we need bring the solution that is Jesus!