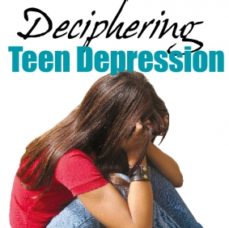 Melissa, age 13, suffers from terrible stomach pain and headaches. In fact, she has come to the emergency room (ER) and seen her pediatrician 10 times in two months.  Her parents, educated and attentive, are frustrated with the medical profession. “No one does anything except order more blood work and more CT scans,” her mother says. “But my daughter still wakes up crying, can’t go to school and can’t do anything she enjoys because of her pain. Something has to be done!”
Melissa faces the wall, breathing slowly. Her eyes are vacant, her voice flat. When the doctor asks her parents if she could be depressed, they’re angry. “She isn’t crazy; she’s sick!”

A downward spiral
But later they take the doctor aside. “Her brother died last year, and so did her grandmother. Maybe she is depressed.”
Later the same night, Gene, age 17, arrives in the ER on a stretcher. Paramedics give the ER staff an empty pill bottle and a note written by Gene.
“I know everyone will be better off without me,” the note says. “I’m worthless, and all I do is disappoint you. Please forgive me, but I can’t live like this.”
He’s a bright young man who accepted Christ at age 10 and has always been active in church. But he has slipped away lately, talking to his friends less, no longer playing sports.  Once he tried his mother’s pain prescription when he was alone. He admitted it, so his family thought drugs were the problem. His behaviour was a hint that he was spiraling downward. His next real statement came when he overdosed.

No-one immune
Melissa and Gene aren’t alone. Depression visits small children with cancer, senior citizens grieving for lost spouses and every age group in between. But it seems especially common among adolescents; one out of 20 adolescents struggle with depression sometime before adulthood.
Not even children from healthy, loving families are immune to the problem. Faithful Christian teens are as susceptible as non-Christians; teens from stable families may develop it as surely as those from broken homes.

Identifying the signs
Depression is a disease with many possible symptoms. It can appear as Melissa’s perplexing physical problems or as Gene’s isolation and sense of worthlessness. Depression can cause apathy, boredom or a lack of energy. Young men and women suffering from it may feel guilt over nothing in particular and gain no relief from their repeated, sincere repentance. Because of the many forms depression can take, parents must be constantly on guard. The emotional cycles of even the healthiest teen can be confusing. So in watching for depression, parents need to look for inconsistent changes in behaviour.
A depressed adolescent may suddenly lose interest in his appearance or his future. Grades may fall, truancy and encounters with authority may occur, and alcohol and drugs may become a problem. While these things can seem like rebellion, they may be clues to depression. Substance abuse may simply be an attempt to medicate deep pain.
A depressed youth may be more emotionally unstable than normal. On the other hand, emotional withdrawal and even apathy may develop. The critical truth is that we need to know our children, participate in their lives and appreciate what they love and what they dislike. This is the foundation  from which we can notice worrisome changes.

Hope in Christ
Depression isn’t just temporary sadness; this debilitating disease robs young lives of joy. Tragically, depression sometimes leads to suicide as a kind of ultimate anesthesia.
Before they act, suicidal young men and women may mention death, give away possessions or withdraw from loved ones or sometimes, once committed to their act, they may seem suddenly at peace and affectionate. Tormented for so long, they see death as a way to the peace they want so much.
Parents should realise that depression is a disease, not unlike the diseases that afflict the rest of the human body. Depression does not suggest moral failure on the part of the young victim or the victim’s family, any more than lymphoma, pneumonia or diabetes does.  Our minds are as mortal and as fallen as our bodies. One day, when God gives us new bodies, there will be no disease – mental or physical. Until then, we must be on guard against depression. If it attacks, we need to respond with love for the young lives entrusted to our care and pray for our children constantly.

Dr. Edwin Leap is an emergency physician.This article is with kind permission from Focus on the Family Africa. For more info on this topic or to order helpful family rescources please call: 031 716 3300 or visit our South African  office on website www.safamily.co.za or see panel right for more.