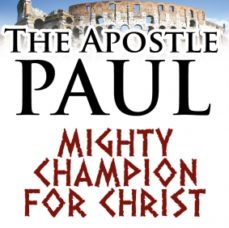 Abrasive! Opinionated! Arrogant! Woman-hater!  These are a few  words that have been used to describe the Apostle Paul. Yet few descriptions could be further from the truth. True, on some occasions, Paul was direct to the point of being offensive to some, but he did not waver one inch from speaking God’s Truth. When he was the mouthpiece and ambassador of the King, he stood out as a prince among men. But behind the scenes we find a man gloriously transformed by the living Christ; a man of deep compassion and humility, who knew the meaning of raw fear and even trembling terror.

Who was Paul?
I first encountered the Apostle soon after my conversion at the age of 20, coming from a background of ignorance of Godly Truth.  The Bible became a living letter from God. I devoured the Gospel accounts in the New Testament, utterly enthralled by Jesus and the disciples. Then, to my consternation, this unknown figure popped out of the Book of Acts – Saul of Tarsus, later to be known as Paul, the Apostle to the Gentiles. As I read, I caught glimpses of a story of adventure, Christian heroism and faith that gripped my imagination. Who was this amazing man? Where could I learn more of the real man behind the often-austere figure painted by Luke and later reflected through Paul’s own letters and Church history? So began a search that has lasted a lifetime.
Like an archaeologist finding a priceless relic embedded in stone, I had to dig behind the Biblical account, sift my findings and assemble the evidence. Finally it had to be put together with meticulous care. A reconstructed life lay before me. What a find! What a man!

A man of adventure
Any understanding of Paul must start with his upbringing and formative years in Tarsus. He was the son of a Pharisee, raised in a cosmopolitan city with a strong Roman influence. There was a Roman garrison in Tarsus and the annual Cilician Games were held there. Paul’s life is shrouded in mystery and questions. Did he ever marry or have romantic involvements? Where was he when Jesus was about His ministry in Galilee? What sparked the fiery fury that turned Saul into the arch-tormentor of the infant Church? What drove him to Damascus to hound the Christians there? When and where did he have the experience of being caught up into heaven? Why is it that Luke recounts so few details of the sheer drama, high adventure and intrigue that plagued most of the Apostle’s life?
The accounts in Acts and sketchy details contained in Paul’s own letters, only provide us with a rough outline of his life, with few graphic details. Yet there are clues and hints of enough intense drama, intrigue and adventure to fill two lifetimes. Here are some of the clues left by Paul in his writings when he ‘boasted of his weaknesses and humiliations’.“I have worked harder, been in prison more frequently, been flogged more severely, and been exposed to death again and again. Five times I received  from the Jews the forty lashes minus one. Three times I was beaten with rods,  once I was stoned and left for dead, three times I was shipwrecked, I spent a  night and a day in the open sea, I have been constantly on the run. I have  been in dangers from rivers, in danger from bandits, in danger from my own countrymen, in danger from Gentiles, in danger in the city, in danger in the country, in danger (from pirates) at sea; and in danger from false brothers. I have worked hard and gone without sleep; I have known hunger and thirst and gone without food; I have been frozen and naked.”  2 Cor 11:23-27

A man of courage
He also writes of facing insurrections, being bloodied and manhandled by riotous mobs, attacked by assassins and escaping plots against his life too numerous to mention. He speaks of fighting wild beasts in Ephesus (1 Cor. 15:32) and three shipwrecks not mentioned in Acts. We have only one account of his terrible floggings and beatings.
For over 40 years I have struggled to piece together probable answers to the many questions. In the process I discovered the little-known, remarkable man behind the theological mask.

A man of depth
Paul was a choleric in temperament – a driven man with clearly defined goals and a passion to achieve them; a man with amazing determination and self-control. As a young man he experienced furious outbursts of anger, bitterness and resentment. Yet the latent strengths of his temperament were already visible in the younger Saul.
Cholerics are not usually compassionate people, but Paul felt the sins of Christians deeply. He wept before God for them. He agonised over the Church. He loved fully and cared deeply.
Above all, Paul was intensely human, with normal human needs, hopes and dreams. He needed love. He needed affirmation and encouragement. He needed intimacy. He experienced paralysing fear, such as when he faced the prospect of being torn limb from limb and eaten by wild beasts in Ephesus. He experienced deep depression when he faced the nightmare monsters of utter despair and self-loathing. His mind was tormented to breaking point by the foul attacks of satan, accusing him again and again of unmentionable sins. What was the secret that enabled him to emerge from all of these trials as more than a conqueror?

A man of God
One great fear dominated Paul more than any other, and that was not the fear of his own pain, suffering, or even death. It was the fear that he would crack; that he would break under pressure; that he would bring shame and dishonour to the Lord who loved him so much. Like the coach of a great champion, he feared that, when he himself was in the arena, he might be disqualified for breaking the rules of the race.
How did Paul cope with the terrible, life-threatening beatings he endured without becoming bitter and twisted? We will never know the complete answer, but Paul himself proves the most important key – it was Christ within. Christ who endured the Cross, scorning its shame and emerging as a triumphant Victor. Coupled with this was God’s amazing Grace, the inner strength given by God that carried him through the most terrible trials.

A man of humility
At a purely human level, there is evidence that he practised two simple disciplines while enduring almost unbearable pain and suffering. He blessed those who persecuted and illtreated him, even while his flesh was being torn by the horrible lashes of the scourge. And, he prayed for his tormentors, both in tongues (in the Spirit) and with his mind even whilst being beaten.
He points to this in his letter to the Romans:    “In the same way the Spirit helps us in our weaknesses. We do not know what we ought to pray for, but the Spirit Himself intercedes for us  with groans that words cannot express.”  Rom 8:26
Paul was a most self-effacing man. He was a man who had lived through enough high drama for two lifetimes. In today’s world, he would be in huge demand at seminars to recount his amazing adventures. The secular press would be clamouring for his life-story. Film-makers would want to make an epic film of his life. I believe he demanded that Luke write nothing about his trials and dramas – nothing that could exalt him to hero-status in the eyes of the believers. I can picture him tearing up some of Luke’s prize manuscripts with dire threats to the unfortunate physician.
“Write only of Christ,” he perhaps urged again and again. “People must see Jesus, not Paul.” He was quoted to have said, “Follow my example and role model. Live as I live.”
What a boast. What a man. Intrepid adventurer, warrior, soldier, gladiator for Christ and endurance athlete.  To follow Paul’s life story is truly inspiring, daunting and challenging. His is not just a story. It is a model that casts us back on to his letters with a new understanding of the man and the mighty Christ he served, with the call from Christ to follow in His steps.

GERALD McCANN, is a retired pastor and writer. He has just completed a comprehensive trilogy about the Apostle Paul,  To order part one, ‘Paul – Mighty Champion for God’, call  028 2849179, or P.O.Box 48, Botrivier 7285, or geraldmc@telkomsa.net.