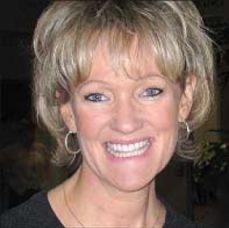 Karen Kingsbury, Daughter of the King

Fact File:
Karen and her family live in the Vancouver, Washington area, near Salmon Creek
She is 45 years old and has been married to Donald for 20 years
They have six children: Kelsey, Tyler, Austin, E. J., Sean, and Josh. Karen and Donald adopted EJ, Sean, and Josh from Haiti in 2001
After Karen’s father died from Diabetes, she determined to lose weight and in 2007, she lost 32kgs! Karen says she couldn’t have done it without prayer
She has written more than 30 novels and has nearly 6 million copies in print
This year alone, Karen plans to speak at 11 women’s conferences.

As the bestselling American author of inspirational fiction for the last two years, a mother to six children, a popular conference speaker and avid traveller, Karen Kingsbury is a talented, busy, lady. It’s not uncommon to find her sitting on the edge of the family pool with her laptop or cheering on her sons from the sidelines of a football game or other extracurricular activity. When she travels for book-related speaking engagements, at least one of her children or her husband always accompanies her.
Best known for her ‘life-changing’ fictional books, Karen is passionate about the power of words and their role in leading people toward the Author and Finisher of our Faith – Jesus. For Karen, life is not just about books though. Karen loves people and is known for her warm personality and gracious patience when conducting books signings (some which have lasted for several hours). JOY! spoke to Karen about her monumental success in the (often) cut-throat world of literature and how she finds time to live the life to which God has called her.

It is clear that you are walking in God’s Will for your life. When did you first come to know Him as your Lord and Saviour?
I was raised in a very loving home where we were taught to believe in Jesus Christ. However, we did not read the Bible, and our church practices were based primarily on traditions. When I was in my mid-20s, I met Donald – the man who would eventually become my husband. One day, after talking and spending time together, Don asked me out to the movies. He also asked if he could bring his Bible and read it with me before our date. I thought he was very strange, to say the least! I was very resistant to the Bible at first, and ultimately we reached a place where during a discussion on Scripture, I took his precious Bible, threw it on the ground, and split the binding down the middle. He picked up the pieces and left without an angry word or a comment. That was the beginning of a life-changing time for me. Throughout that weekend I couldn’t eat or sleep, because I was so disturbed that I’d thrown his Bible. Finally after 48 hours, I made my first visit to a Christian bookstore. I purchased a Bible and a concordance, intent on proving that my traditions were in the Bible. Half an hour later, when I found that they weren’t in Scripture, I felt God saying, “You can fall away with these man-made beliefs, or you can grab onto My Word and never let go!” I grabbed as hard as I could, and have never let go of God’s Word since. My husband and I reconnected, obviously, and began attending a non-denominational church. We were baptised together in 1987 and, to this day, I thank God for His unbelievable mercy and Grace.

You started out as a sports reporter for local newspapers long before you were a novelist. What first drew you to journalism?
I knew from when I was about 10 years old that I wanted to be an author, but I also understood that it was not a career than just anyone could succeed in. So as a back up plan, I studied and worked in journalism. The camaraderie of the newsroom is something I sometimes miss, but without a doubt my work as a reporter opened the doors for me to become an author. After working for a few years in the industry and praying with my husband Don for new career opportunities, an agent saw a story of mine and offered me a book deal. Many years earlier God had confirmed I should write Christian fiction after I read Francine Rivers’ novel, ‘Redeeming Love’, so I knew that this was my moment.

With six children, how do you find time to write?
I am blessed to have wonderful people (including my mother and sister who work with me) all helping make my writing career possible. There are two other huge factors that enable my career: firstly, God who allows me to write quickly, and secondly, Don who has put his career on hold in order to look after the kids full-time. He helps with my business and he home-schools our children. I could not do what I do without my husband at my side supporting me. He literally wakes up before dawn most days and walks around our house, praying for me and our family. He takes his role as spiritual leader of our family very seriously. While I’m gone on speaking or business trips, he is constantly praying for me, and telling me how proud he is of me. Most men might struggle with the way God has grown my ministry of Life-Changing Fiction, but not Donald.

What are the steps you take when you write a new book?
First, I take an idea that God has placed on my heart, and I find a title. Next, I flesh out the characters. I name them; give them biographies, strengths, weaknesses, etc. I figure out how the story will change them, make them stronger, and how God will be glorified in the process. Finally I write a very detailed chapter outline. From there, I write the book.

How much research do you do before writing on a specific topic like Cystic Fibrosis in ‘A Thousand Tomorrows’?
I research extensively, depending on the topic. To the degree that I need to explain and be familiar with a topic, I research it. Research cannot take over the storyline. Rather it is subtle, like the gentle backdrop to a picture. Though not the most important element, it certainly is crucial to the story. If I don’t have accurate research, the rest of the story will fail utterly. So, I take research very seriously and I spend days, sometimes weeks, researching prior to writing a book.

How do you find the characters for your stories?
I study people relentlessly. Once I had a friend who stopped hanging out with me because she said she was worried I’d make her or her family into characters! She was serious. The truth is that I don’t use my friends as characters. Rather, I think up an imaginary person and give them quirks or habits or traits or mannerisms that I might see in strangers around me

Have you ever felt the Lord speak to you through your writing?
Definitely. I might be writing a scene and the characters are in a difficult situation, and often I’ll feel the Lord’s compassion and Grace, His mercy and strength, His peace . . . and I’ll know that God wants me to demonstrate that, to carefully craft that picture for the readers so that they can feel God’s Grace as well.

You adopted 3 boys from Haiti, which in itself is quite an interesting story of God’s Hand at work. What prompted your move to adopt?
Our lives were very busy and although we had discussed the idea of adoption from time to time, it was not something that kept us up at night. One night, while surfing the Internet, I stumbled upon a site that listed children available for adoption in Haiti. I saw a picture of a five-year-old boy named E.J who had big, brown eyes and a dimpled smile. I instantly felt a connection to him and after discussing it with Don, we decided to proceed with the paperwork. As we completed the paperwork, we came across another boy’s photo, named Joshua. We chatted to our children and they were excited about having two additional brothers.

Due to reasons we can’t explain, the orphanage told us that Joshua would not be a good fit with the family. Reluctantly we selected another six-year-old boy named Sean. Six months later, the orphanage director called saying we could collect the boys. I travelled to Haiti and whilst there, found out that Joshua was still up for adoption. After talking with Don, we decided to adopt all three boys (who did not speak a word of English!). Adopting three children from another race and country was the scariest thing we have ever done. When people comment on how we have been a blessing to these little boys, we correct them every time. The blessings have been all ours. The adoption took place over the course of two years and I can truly say it has been a wonderful journey of trusting in God and seeing His Hands skilfully at work in our lives.

What plans do you have for the future?
Only God knows what tomorrow holds, but in Him we can put our hope and our trust. He is the same yesterday, today and forever and we must never forget how much He loves us. I am confident that whatever happens, God is in control.
“Reading a Karen Kingsbury novel is akin to experiencing a makeover.”
“Her Christian fiction books can draw you into the characters’ lives so deeply that you find yourself examining your own. Through believable twists and turns in plots, Kingsbury routinely delivers on her trademarked promise to give readers Life-Changing Fiction.”
“Kingsbury’s most recognised titles include ‘Ever After’, ‘A Time to Dance’ and ‘When Joy Came to Stay’. She receives hundreds of e-mails each week from readers around the world, who share how a particular book helped them recommit to their marriages, extend forgiveness or renew their faith.”