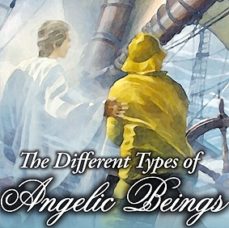 The Different Types of Angelic Beings
Following on from our article in the previous issue regarding Angels and important facts we need to know about them, the Bible reveals that there are three different types of angelic beings:

Angels and Archangels,
Seraphims, and
Cherubims

1. ANGELS AND ARCHANGELS
Arch means ‘Chief’, therefore ‘Archangels’ are ‘chief angels’. The Bible only makes mention of two archangels:
a) Michael:
He is the warrior angel and leads the angels of God in war (Rev 12:7-9; Dan 10:13). The Bible also says that he will return with the Lord Jesus for us (1 Thess 4:16).
b)Gabriel:
He stands in God’s presence and is the messenger who comes forward with God’s special plans and purposes (Luke 1:19; 26; Dan 8:16). He announced the births of both John the Baptist and Jesus.

2. SERAPHIMS
The main purpose of Seraphims is to proclaim the holiness of God. Seraphim have six wings – two for worship, two for flying and two with which they cover their feet.

They are referred to in the following Scriptures: “In the year that King Uzziah died, I saw the Lord sitting on a throne, high and lifted up, and the train of His robe filled the temple. Above it stood seraphim; each one had six wings; with two he covered his face, with two covered his feet, and with two he flew. And one cried to another and said: ‘Holy, holy, holy is the LORD of hosts; the whole earth is full of His glory’!” Isa 6:1-3

The four creatures, each having six wings, were full of eyes around and within. And they do not rest day or night, saying: ‘Holy, holy, holy, Lord God Almighty, who was and is and is to come’! ” Rev 4:6-8

3. CHERUBIMS
These are the first angels spoken of in the Bible and were responsible for guard duty in Eden and before the throne (Gen 3:24; Psalm 99:1).

THE WORK OF ANGELS IN HEAVEN
Some have the misguided notion that angels don’t have anything to do but to ride on clouds and play golden harps. The conclusion drawn from this is that Heaven is a dull and boring place. But nothing could be further from the truth! Angels worship God and angels work on earth.

1. ANGELS WORSHIP
Angels aren’t without anything to do. There is a great deal that is required of them and much for which they are responsible. One of the chief duties (privileges) of the angels is to worship God (Isa 6:3). Angels are the most content creatures in the universe. They love Heaven and the worship of God. They are joyful and excited (Heb 12:22).

2. ANGELS WORK
The term ‘angel’ in both Hebrew and Greek means ‘messenger’ or ‘one who is sent’. Angels are God’s servants directing His affairs.“Take heed that you do not despise one of these little ones, for I say to you that in Heaven their angels always see the face of My Father who is in Heaven.” Matt 18:10

This Scripture clearly suggests that angels are attentive for the purpose of action. The angels are always eager to hear and fulfil God’s orders. They stand close to Him so that they can respond immediately. There must be a great deal to do in the management of the universe but God’s servants are up to the tasks.

THE WORK OF ANGELS IN THE SKY
Remember that not every angel that occupied a position in the sky is friendly. Some are hostile. There are good angels (loyal to Christ) and fallen angels (evil followers of satan – demons).

1. THE ANGELS ARE ENGAGED IN WAR
“Then he said to me, “Do not fear, for from the first day that you set your heart to understand, and to humble yourself before your God, your words were heard; and I have come because of your words. But the prince of the kingdom of Persia withstood me twenty-one days; and behold Michael, one of the chief princes.” Dan 10:12-13

Here we see that the angels are engaged in war. We also see the intriguing work of angels with our prayers. We may sometimes be tempted to believe that God has not heard our prayers or is slow in answering them. This is not the situation at all, as we see with Daniel. The delay Daniel experienced wasn’t due to any problem in his praying. Nor was God’s ear closed to his request. Rather, the sole delay was demonic.

NOTE: We must remember that there is a war going on! Angels are not being destroyed but are being hindered in their work. We should follow Daniel’s example in prayer and not despair. Ephesians 6 says that we are able to put on the full armour of God and go to war in prayer.

2.THE FUTURE WAR IN HEAVEN
In the book of Revelation we read of a future war in Heaven when Michael and his angels will fight the devil and his angels. The outcome of this battle will be the total cleansing of the skies (Rev 12:7-17). All the evil angels will be cast to the earth and then later bound in the abyss (Rev 20; Is 24:21-22). The greatest war of the skies will occur.

Not a single angel of God will be harmed and not one evil angel will escape. It will be the most thorough conflict ever experienced in the angelic world. For the moment, however, we must remember that not everything in the sky is peaceful. The angelic battles will continue until Jesus comes again. Satan is determined to undermine God’s operation, but he will fail. We are on the winning side. Therefore, it is an incorrect assumption to think that the angels are only singing in a Heavenly choir. They are fighters. Under Jesus’ leadership they are in constant combat for the expansion of God’s Kingdom on earth.