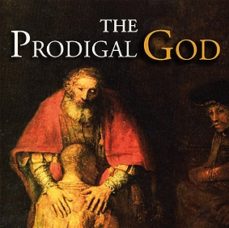 The Prodical God
The Prodigal Son is probably the most well-known parable in the Bible. Incredibly, it is also almost universally misunderstood. Let us read the parable first before looking a little deeper. “…Jesus continued: ‘There was a man who had two sons. The younger one said to his father, ‘Father, give me my share of the estate.’ So he divided his property between them.

Not long after that, the younger son got together all he had, set off for a distant country and there squandered his wealth in wild living. After he had spent everything, there was a severe famine in that whole country, and he began to be in need. So he went and hired himself out to a citizen of that country, who sent him to his fields to feed pigs. “

THE PARABLE OF THE LOST SON
“He longed to fill his stomach with the pods that the pigs were eating, but no one gave him anything. When he came to his senses, he said, ‘How many of my father’s hired men have food to spare, and here I am starving to death!
I will set out and go back to my father and say to him: Father, I have sinned against Heaven and against you. I am no longer worthy to be called your son; make me like one of your hired men.’ So he got up and went to his father. But while he was still a long way off, his father saw him and was filled with compassion for him; he ran to his son, threw his arms around him and kissed him.

The son said to him, ‘Father, I have sinned against Heaven and against you. I am no longer worthy to be called your son.’ But the father said to his servants, ‘Quick! Bring the best robe and put it on him. Put a ring on his finger and sandals on his feet. Bring the fattened calf and kill it. Let’s have a feast and celebrate. For this son of mine was dead and is alive again; he was lost and is found.’ So they began to celebrate.”

A GRACIOUS FATHER
”Meanwhile, the older son was in the field. When he came near the house, he heard music and dancing. So he called one of the servants and asked him what was going on. Your brother has come,’ he replied, ‘and your father has killed the fattened calf because he has him back safe and sound.’ The older brother became angry and refused to go in. So his father went out and pleaded with him.

But he answered his father, ‘Look! All these years I’ve been slaving for you and never disobeyed your orders. Yet you never gave me even a young goat so I could celebrate with my friends.  But when this son of yours who has squandered your property with prostitutes comes home, you kill the fattened calf for him!’

‘My son,’ the father said, ‘you are always with me, and everything I have is yours. But we had to celebrate and be glad, because this brother of yours was dead and is alive again; he was lost and is found.’ “ Luke 15:11-32

THE UNTOLD STORY
Most readings of this parable have concentrated on the flight and return of the younger brother – the ‘Prodigal Son.’ That misses the real message of the story, however, because there are two brothers, each of whom represents a different way to be alienated from God, and a different way to seek acceptance into the Kingdom of Heaven. It is crucial to notice the historical setting that the author provides for Jesus’s teaching. In the first two verses of the chapter, Luke recounts that there were two groups of people who had come to listen to Jesus.

First there were the “tax collectors and sinners.” These men and women correspond to the younger brother. They observed neither the moral laws of the Bible nor the rules for ceremonial purity followed by religious Jews.

TWO GROUPS OF PEOPLE
They engaged in “wild living.” Like the younger brother, they “left home” by leaving the traditional morality of their families and of respectable society.
The second group of listeners were the “Pharisees and the teachers of the Law,” who were represented by the elder brother. They held to the traditional morality of their upbringing. They studied and obeyed the Scripture.

They worshipped faithfully and prayed constantly. With great economy Luke shows how different each group’s response was to Jesus. The progressive tense of the Greek verb translated “were gathering” conveys that the attraction of younger brothers to Jesus was an ongoing pattern in his ministry. They continually flocked to him. This phenomenon puzzled and angered the moral and the religious. Luke summarises their complaint: “This man welcomes sinners and (even) eats with them.”

DEALING WITH RELIGIOUSITY
To sit down and eat with someone in the ancient Near East was a token of acceptance. “How dare Jesus reach out to sinners like that?” they were saying. “These people never come to our services! Why would they be drawn to Jesus’s teaching? He couldn’t be declaring the truth to them, as we do. He must be just telling them what they want to hear!”

So to whom is Jesus’s teaching in this parable directed? It is to the second group, the Scribes and Pharisees. It is in response to their attitude that Jesus begins to tell the parable. The parable of the two sons takes an extended look at the soul of the elder brother, and climaxes with a powerful plea for him to change his heart.

MORAL BLINDNESS
Throughout the centuries, when this text is taught in church or religious education programmes, the almost exclusive focus has been on how the father freely receives his penitent younger son. The first time I heard the parable, I imagined Jesus’s original listeners’ eyes welling with tears as they heard how God will always love and welcome them, no matter what they’ve done.

We sentimentalise this parable if we do that. The targets of this story are not ‘wayward sinners’ but religious people who do everything the Bible requires. Jesus is pleading not so much with immoral outsiders as with moral insiders. He wants to show them their blindness, narrowness, and self-righteousness, and how these things are destroying both their own souls and the lives of the people around them. It is a mistake, then, to think that Jesus tells his story primarily to assure younger brothers of his unconditional love.

OFFENCE AND PRIDE
No, the original listeners were not melted into tears by this story but rather they were thunderstruck, offended, and infuriated. Jesus’s purpose is not to warm our hearts but to shatter our categories. Through this parable Jesus challenges what nearly everyone has ever thought about God, sin, and Salvation.

His story reveals the destructive self-centredness of the younger brother, but it is also condemns the elder brother’s moralistic life in the strongest terms.
Jesus is saying that both the irreligious and the religious are spiritually lost, both life-paths are dead ends, and that every thought the human race has had about how to connect to God has been wrong.

TWO SIBLINGS AT ODDS
Both older brothers and younger brothers are with us today, in the same society and often in the very same family. Frequently the oldest sibling in a family is the parent-pleaser, the responsible one who obeys the parental standards. The younger sibling tends to be the rebel, a free spirit who prefers the company and admiration of peers. The first child grows up, takes a conventional job, and settles down near Mom and Dad, while the younger sibling goes off to live in the hip-shabby countries of New York and London.

CULTURE WARS
These natural, temperamental differences have been accentuated in more recent times. In the early Nineteenth Century industrialisation gave rise to a new middle class – the bourgeois – which sought legitimacy through an ethic of hard work and moral rectitude. In response to perceived bourgeois hypocrisy and rigidity, communities of bohemians arose. Bohemians stress freedom from convention and personal autonomy.

To some degree the so-called culture wars are playing out these same conflicting temperaments and impulses in modern society. More and more people today consider themselves non-religious or even anti-religious. They believe moral issues are highly complex and are suspicious of any individuals or institutions that claim moral authority over the lives of others. Despite (or perhaps because of) the rise of this secular spirit there has also been considerable growth in conservative, orthodox religious movements. Alarmed by what they perceive as an onslaught of moral relativism, many have organised to ‘take back the culture,’ and take as dim a view of ‘younger brothers’ as the Pharisees did.

A DEADLY CONDITION
So whose side is Jesus on? He is on the side of neither the irreligious nor the religious, but he singles out religious moralism as a particularly deadly spiritual condition. It is hard for us to realise this today, but when Christianity first arose in the world it was not called a religion. It was the non-religion. Imagine the neighbours of early Christians asking them about their faith. “Where’s your temple?” they’d ask.

No one had ever heard anything like this. So the Romans called them ‘atheists,’ because what the Christians were saying about spiritual reality was unique and could not be classified with the other religions of the world. This parable explains why they were absolutely right to call them ‘atheists’.

JESUS’ EXAMPLE
The irony of this should not be lost on us, standing as we do in the midst of the modern culture wars. To most people in our society, Christianity is religion and moralism. The only alternative to it (besides some other world religion) is pluralistic secularism. But from the beginning it was not so. Christianity was recognised as something else entirely. The crucial point here is that, in general, religiously observant people were offended by Jesus, but those estranged from religious and moral observance were intrigued and attracted to him. We see this throughout the New Testament accounts of Jesus’s life.

REACHING OUT TO OTHERS
Jesus’ teaching consistently attracted the irreligious while offending the Bible-believing, religious people of this day. However, generally, our churches today do not have this effect. The kind of outsiders Jesus attracted are not attracted to contemporary churches, even our most avant-garde ones. We tend to draw conservative, buttoned-down, moralistic people.

The licentious and liberated or the broken and marginal avoid church. That can only mean one thing. If the preaching of our ministers and the practise of our parishioners do not have the same effect on people that Jesus had, then we must not be declaring the same message that Jesus did.I f our churches aren’t appealing to younger brothers, they must be more full of elder brothers than we’d like to think.