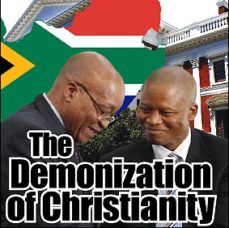 The Demonization of Christianity
President Jacob Zuma’s nomination of Justice Mogoeng Thomas Reetsang Mogoeng as Chief Justice of the Constitutional Court unleashed a media storm in South Africa and exposed the blatant anti-Christian bias so prevalent in the liberal media.

The liberal outcry
Several pro-homosexual and anti-family groups ganged up on Justice Mogoeng, questioning everything from his judicial experience, commitment to upholding women’s and homosexual’s rights and the Constitution itself. Until his nomination, Justice Mogoeng existed in relative media obscurity. A fourteen year veteran of the bench, Justice Mogoeng (50), who holds a Master’s Degree in Law, began his legal career as a Supreme Court prosecutor in Mafikeng in 1986. He served as a Judge of the North West High Court from 1997, the Labour Appeals Court from 2000 and as Judge President of the North West High Court from 2002–2009. Mogoeng was appointed to the Constitutional Court in 2009 where he served until his nomination on 16 August 2011.

A personal attack
Most of the criticism centred on Mogoeng’s religious beliefs, including his position as a lay-pastor at Winners Chapel Church in Johannesburg. According to media reports, “Mogoeng’s church believes homosexuality is a sin that can be cured through prayer.”
Once his personal Christian convictions became known, the liberal media unleashed a wave of hatred against Mogoeng. Many of the anti-family groups who hypocritically labelled Mogoeng ‘gender-biased’ support a legalised sex industry which perpetuates the brutal sexual exploitation of women and children. Homosexual activists – who primarily advance their radical agenda through the law courts – viewed Mogoeng’s Christian convictions as a threat and ramped up their condemnation of the Judge. Homosexual activist and supposed constitutional ‘expert’ Pierre de Vos contends that Mogoeng will have to decide “which god he will serve” as Chief Justice.

Hypocritical standards
Apparently, Christians with a Biblical view of homosexuality are precluded from serving in the judiciary. Predictably, de Vos had no such reservations when Judge Edwin Cameron – a radical homosexual activist and co-author of ‘Defiant Desire,’ a book which speaks positively of sexual relations with children – was appointed to the Constitutional Court in 2008. Then acting President, Kgalema Motlanthe’s, dead-of-night appointment of Cameron was quietly announced in the media. There was no public inquisition – no debate about his suitability for the post, nor were his previous rulings dissected and second guessed. The liberal media welcomed Cameron’s appointment to the highest court in the land because it fitted in perfectly with their pro-homosexual, anti-Christian bias.

An anti-family agenda
The mainstream media resent Bible believing Christians, regarding them a threat to democratic freedoms. Secular humanistic freedoms include complete sexual license with no restraint. The liberal media is dominated by people who believe prostitution is legitimate work, that porno­graphy, even in its most depraved manifestations, must be freely available, that sexual promiscuity (with its inherent dangers) is glamorous and progressive and that homosexuality is a legitimate ‘alternative lifestyle’ worthy of special privileges and protections. It is no surprise then that an industry steeped in this godless ideology will view Biblical Christianity with trepidation.

A shocking state of affairs
The one view regards sexual immorality as sin and the other insists it’s a human right. However, the destructive consequence of sexual immorality weighs overwhelmingly in favour of the Biblical argument. But those tasked with articulating this message in the public sphere are mostly silent. As a result, Christians are not losing the debate on Biblical morality – they are just not participating! And tragically that’s what transpired with Justice Mogoeng’s vilification in the media.

The God-haters launched an unprecedented attack on Justice Mogoeng because they realised he was a Bible believing Christian destined for a position of historic influence. The naked hostility displayed against Mogoeng’s Christian beliefs should have elicited some response from the Christian Church – but sadly, there was none.  ACDP leader, Rev Kenneth Meshoe’s letter to the press accurately articulated the media’s staggering hypocrisy, including its demonization of Christian beliefs.

Chief Justice Arthur Chaskalson allegedly belonged to the Jewish faith, while Chief Justice Ismael Mohamed was a Muslim. A well-known journalist allegedly said that a Christian should not be Chief Justice. This is a wake-up call for all sleeping Christians. If it is acceptable for an unbeliever, agnostic, atheist, Jew or Muslim to serve as Chief Justice, why can’t a committed Christian be the Chief Justice?”

We need to stand together
Meshoe was spot on. But tragically, instead of supporting this argument another Christian political party chose to continue its long-running battle with Meshoe by publically opposing his views and (inadvertently) siding with the Christian bashing media.

In the midst of a media frenzy that ridiculed Christianity, it is sad that the Christians could not set-aside petty differences to unite against a common enemy. The liberal media mostly ignores Christian comment. But when Christians publically attack other Christians, this is a gift too good to ignore. The party’s attack on Meshoe was compounded by the fact that no other Christian leaders in South Africa were motivated to defend the blatant attacks on Christianity. This could be ascribed to the fact that most Christian leaders probably knew very little about Justice Mogoeng and were reluctant to enter the fray. However, upon careful inspection, one would observe that the vicious attacks on Mogoeng were more about his Christian beliefs than it was about his competency.

We need to defend the truth
Consequently, pro-homosexual activists and their cheerleaders in the media put Christianity on trial. Despite the fact that religious belief, thought and opinion is protected by the Constitution, Christian values and principles were declared inconsistent with the protection of human rights.

In a bizarre twist of irony, the very worldview that produced the freest civilisations on earth is now considered a threat to human freedoms. However, the Biblical Christian worldview is still the only sure foundation for a strong, healthy, stable and prosperous society. And that‘s why we must defend it – whatever the circumstances!