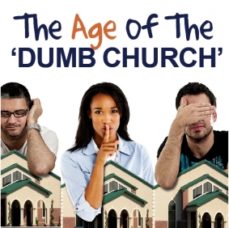 I have a friend who’s an experienced pastor, teacher, and Christian apologist. He’s very well educated, articulate, teaches in a way that hits the mark, and has a passion particularly for grounding young adults in the faith during their high-school and early college years.
Currently, he’s employed with Youth for Christ and a while back he felt a burden to try and help churches in our area do what he does best: equip youth to defend the Christian faith in the world and know why and what they believe. He has developed a number of curriculums to use for such situations, and sent a letter to all the churches in our metropolitan area (which is quite a lot). He explained what he does and offered to come to their church free of charge to conduct Christian apologetic training for their youth. How many churches took him up on his offer? Zero. None. Zilch.

Be sure of what you believe
Now, any Christian leader who doesn’t have their head in the sand, knows how depressing the statistics are for young adults who walk away from their faith in the late high-school/early college years. At times, I’ve had atheists toss this data in my face in an attempt to argue that people ‘smarten up’ when they get older, but that isn’t the problem at all.
The fact is some in this particular demographic leave the Church because they get talked out of a faith that they were never sure of in the first place.

Don’t be ‘dumb’
The storyline is sadly familiar. Maybe a young person was brought up in a church. Or, maybe they weren’t and began to investigate Christianity on their own. Either way, sooner or later they begin to ask hard questions, good questions, questions that deserve solid answers. They rightly need what they believe in their heart to connect with their mind and when they don’t get it, they disconnect from Christianity.
Why does this keep happening? In short, it happens because much of the Church today is ‘dumb’. Don’t misunderstand me, I mean no disrespect when I use the term ‘dumb’. What I mean is that the Church is ‘dumb’ in that they aren’t well educated in what they believe, fail miserably in fulfilling 1 Peter 3:15 that says all Christians should be prepared to give a reason for why they believe, and are woefully unable to handle any challenge to Christianity that comes from unbelievers or the cults.

Beware of anti-intellectualism
Dr RC Sproul has said many times that he believes we are living in the most un-intellectual period in the history of Western civilisation. Over 30 years ago, former Lebanese ambassador to the United States, Charles Malik, said the following in his speech at the dedication of the Billy Graham Centre in Wheaton, Illinois: “I must be frank with you: the greatest danger confronting Christianity is the danger of anti-intellectualism. The mind, in its greatest and deepest reaches, is not cared for enough.”
Such statements made by Sproul, Malik, and others were not always heard in the Church. The fact is that the Church dominated intellectual thought and discourse for hundreds of years, producing such thinkers like Augustine, Aquinas, Calvin, Edwards, and others. Such men had their opponents, but their detractors never ridiculed their brainpower because the Churchman’s intellectual prowess left no room for criticism.

Where are the thinkers?
Shortly after the era of Edwards, something changed. Gospel preachers like Charles Finney arose and replaced the intelligent presentation of the Gospel, which was backed by meaty Biblical exposition and solid philosophical rationale, with emotional appeals, questionable theology, personal anecdotes with humour, a celebrity-style leader, and engineered publicity. Sound familiar?
Unfortunately, in many seeker friendly or liberal churches today, the character-istics of Finney and his followers are played out each Lord’s Day with the end result being a church body unable to intellectually defend the faith they espouse.
Characteristics of a ‘dumb’ church
How can you tell if your church exhibits traits that characterise a ‘dumb’ church? Although not exhaustive, I offer these criteria that I believe help contribute to a church becoming ‘dumb’:

1. What do you see when you look at the leadership?
Preaching is always topical and never expository. Selective topical series allow tough and deep theological subjects, as well as ‘controversial’ passages of Scripture, to be avoided with ease.
Although the church leaders offer strong statements as to how they are a “Bible-believing church”, the Bible is actually used and referenced very little in the sermons.  Few quotations from Scripture are heard in a message, with the vast majority of all sermons consisting of personal rhetoric, humour, videos, and personal stories. Biblical terms such as justification, reconciliation, sanctification, propitiation, etc., are avoided like the plague.

Equip your congregation
There is little to no instruction for new believers on the core doctrines of the Christian faith, and no requirement for new believers to attend such instruction. There is no continuous offering of apologetic training classes that are designed to train Christians in the evidences and defence of the faith, and little to no interest of the pastors in the subject area.
There is no easy way for the congregation to have tough questions answered by the lead pastors; such a thing is quietly ignored, discouraged or not practiced regularly. Deep Bible study programmes are either absent or deliberately pushed out in favour of more ‘relevant’ classes that deal with softer subject matters (e.g. money management).
Adult and children’s Bible-studies before/after the main church service are either omitted or are second class citizens to “Community Groups” that seek to have members meet in each other’s homes during the week. These groups, where teaching is concerned, are run “hands off” where the church leadership is concerned.

What do you give priority to?
There is a huge emphasis on relationship building and serving in areas of the church, but no similar importance placed on growing more Biblically and theologically literate. The youth department has an unmistakable concentration on entertainment, games, social interaction versus actual teaching of Christian doctrines.
The church either has no library or one that is not kept up to date. There is either no staff member assigned specifically to church education, or it is assigned to an already overburdened associate pastor.
Doctrinal statements of the church are missing or are not prominently made available. If they exist, they do not address any controversial theological topics or make very vague statements concerning them.

2. What about the congregation?
The term “Christian apologetics” is completely unfamiliar to the vast majority of the members.  Most of the congregation has no knowledge of church history with the names of Polycarp, Martyr, Luther, Calvin, Edwards, Wesley, Whitefield, Tyndale, and others being completely foreign to them.  Attendance of offered classes are very low compared to overall church attendance.
A warning to the ‘dumb’ church
God warns us in His Word about cultivating a ‘dumb’ church. For example, chastising his readers, the writer of Hebrews offers this admonition against fostering a ‘dumb’ church environment: “By this time you ought to be teachers, you have need again for someone to teach you the elementary principles of the oracles of God, and you have come to need milk and not solid food. For everyone who partakes only of milk is not accustomed to the Word of righteousness, for he is an infant. But solid food is for the mature, who because of practice have their senses trained to discern good and evil.” Heb 5:12-14.

Discerning good and evil
When you have a ‘dumb’ church, the writer of Hebrews says the outcome is a body of believers that is incapable of properly discerning good and evil.
Slowly but surely, error and heresy creep in with no one being the wiser. The end result is churches championing teachings such as universalism, applauding homosexual marriage, and calling evil good and good evil.

Be smart!
My friend Greg continues to train young believers in apologetics, but he does so at the co-op school used by Christian home-school families and at his home. To date, no church has yet taken him up on his generous offer to ground their youth in the Christian faith, which is very sad.
My hope and prayer is that such situations stop happening, that ‘dumb’ churches become the exception rather than the rule, and that smart people who are asking good questions about the Christian faith get the answers they’re looking for from learned believers and pastors like the ones Jeremiah describes:
“I will give you shepherds after my own heart, who will feed you with knowledge and understanding.” Jer 3:15.

Do you have a good answer?
Describing today’s current climate and the type of Christianity needed, apologist and author Ravi Zacharias said: “World leaders don’t have answers anymore. And I think today’s youth will rise up to the occasion…but it will have to be a passionate and thoughtful Christianity and not a mindless, emotive one that has no staying power.”
Some say such a thing is not needed, but I disagree. One of the most haunting questions I’ve ever seen was on the back of my first church history textbook I got in seminary: “How can you live out your faith if you don’t understand it?” 