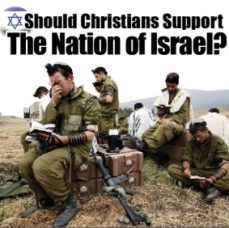 Israel, as a nation is very special to God. We read in Deuteronomy 7:6-8 these words: “For you are a people holy to the Lord your God. The Lord your God has chosen you out of all the peoples on the face of the earth to be His people, His treasured possession. The Lord did not set His affection on you and choose you because you were more numerous than other peoples, for you were the fewest of all peoples. But it was because the Lord loved you and kept the oath He swore to your forefathers that He brought you out with a mighty hand and redeemed you from the land of slavery, from the power of Pharaoh king of Egypt.”

Pray for God’s chosen nation
The Lord’s eternal purpose is to bless the world through Israel. Already He has done so in measure, for “salvation is from the Jews”, John 4:22, but the fullness of future blessing is indicated in the wondrous promise of Isaiah 27:6: “In days to come, Jacob will take root, Israel will bud and blossom and fill the entire world with fruit.”
The declaration that “salvation is from the Jews” suggests our immeasurable debt to Israel. All that we have has come to us through the Jews.
Let us never forget to pray for God’s chosen people. It is true that Israel, today, is in the place of rejection. The nation is a secular, unbelieving (as to the claims of Scripture and the Messiah, Jesus Christ) country, but “…at the present time there is a remnant chosen by grace.” Rom 11:5. Some Jews are being saved and are becoming members of the Body of Christ through faith in their Messiah (Messianic Jews).

Remember God’s promises
Another reason for Christians to support the nation of Israel is because of the Abrahamic Covenant. We read of God’s promise in Genesis 12:2-3:
“I will make you into a great nation and I will bless you; I will make your name great, and you will be a blessing. I will bless those who bless you, and whoever curses you I will curse; and all peoples on earth will be blessed through you”, (see also Genesis 27:29, Numbers 24:9).

Some have turned against Israel
One of America’s most worthwhile accomplishments has been its consistent regard for the plight of the Jewish nation. No country in the history of the world has a better record of treating individual Jews with respect than the United States.
America has committed many sins for which they may well deserve judgement, but as a nation, they have been a consistent friend of the Jews and the nation of Israel, as well as a benefactor. In 1948, President Harry Truman helped persuade the United Nations to recognise Israel as a nation. Since then, the United States has contributed billions of dollars in aid to Israel. [Having said that, Obama has consistently shown a reticence toward supporting Israel and has snubbed meetings with Israeli President, Benjamin Netanyahuu, several times. This does not bode well for future relations with Israel].

A Biblical perspective
From the Biblical declarations of God’s love and care for His chosen people, the nation of Israel, and from the history of nations being destroyed because of their evil dealings with God’s chosen people,  Christian believers should give support to the chosen people of God.
This is not to say that we necessarily support the methods they use in their relationships with the Arab nations. The Bible warned that conflict would always characterise the relations between the descendants of Isaac and Ishmael. Sadly, this conflict will continue until Jesus returns. We must look at the ‘big picture’ through the lens of a Biblical worldview.

Do you support Israel?
While we do not have to support everything Israel does, we most definitely should support Israel’s right to exist and defend herself. God will fulfil His promises and covenants with Israel. God still has a plan for Israel. Woe to anyone who seeks to defeat that plan: “whoever curses you I will curse.” Genesis 12:3.