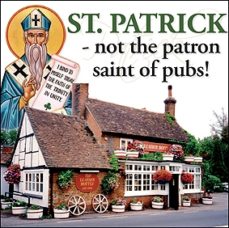 St Patrick – Not the Patron Saint of Pubs
Patrick was only 16 years old when he saw a fleet of 50 longboats heading for the shore. As the Roman Legions had long since departed Britain, Patrick’s home town was vulnerable to attack. As the Irish raiders leapt from their boats onto the pebbled beach, sounding their war-horns, the population fled in terror. The attackers looted and burned the village and carried away captives, including young Patrick.

A man of noble character
The year was AD 405. Patrick’s name in Latin was Patricius, meaning ‘Noble’. He was the son of a Civil Magistrate, but now he had become a slave in Ireland. Patrick was sold to a cruel warrior chief whose stockade in Northern Ireland was surrounded by sharp poles with the heads of his opponents impaled on them. Patrick was put to work as a shepherd to care for his master’s pigs and sheep.
He lived a lonely existence in the nearby hills, enduring long bouts of hunger and thirst, isolated from human company for months at a time. Patrick witnessed the superstitions of the Druid priests who sacrificed prisoners of war to their war gods and newborns to the harvest gods. Skulls were used as drinking bowls; heads of decapitated enemies were used as footballs.

In this strange place at ‘the ends of the earth’ amongst these fierce people, Patrick remembered the faith of his father and grandfather, and the prayers of his mother and turned to Christ. Kneeling on the slopes of the Slemish Mountain, near what is now the town of Ballymena, Patrick prayed, sometimes a hundred times a day.

An end to his enslavement
After six years of slavery, Patrick was led of the Lord to escape and run nearly 200 miles to a coastal port where he was able to persuade a captain to take him along with a shipment of Irish wolfhounds. A storm blew them off course to land on the coast of Gaul (France).

Attacks by vandals had devastated the area and there was no food to be found in the, once fertile, area. Here Patrick was able to repay the kindness of the ship captain by praying for the Lord’s provision – and then seeing a herd of pigs appear.

A voice to the Irish people
Patrick received a Macedonian call. In a vision, an Irishman named Victoricius presented him letters entitled ‘The Voice of the Irish’: “We appeal to you, holy servant boy, to come and walk among us again”. Patrick was “pierced to my very heart” and he returned to the land where he had suffered as a slave many years before.

Leaving a spiritual legacy
Patrick was over 40 years old when he arrived as a missionary to Ireland in AD 432. He faced fierce opposition from the Druids. Patrick survived numerous attempts on his life and confronted the idolatry, immorality, slavery and human sacrifices of the savage tribes.

“Daily I expect murder, fraud or captivity, but I fear none of these things because of the promises of Heaven. I have cast myself into the hands of God Almighty who rules everywhere.” Patrick delighted in taking risks for the Gospel. “I must take this decision disregarding risks involved and make known the gifts of God and His everlasting consolation. Neither must I fear any such risk in faithfully preaching God’s Name boldly in every place, so that even after my death, a spiritual legacy may be left for my brethren and my children.”

Confronting the Druid religion
At Tara, Patrick challenged the Druids to a contest. The Druids invoked demons and brought a dark fog over the land. Patrick prayed and suddenly the fog cleared and the sun shone brightly. The king ordered 27 chariots to go and seize Patrick. He prayed aloud: “May God come up to scatter His enemies and may those who hate Him flee from His face.” The charioteers fell dead. Patrick rebuked the king: “If you do not believe now, you will die on the spot for the wrath of God descends on your head.” The king fell on his knees before the missionary and pledged his realm to Christ. Many turned to Christ on that day.

One of Patrick’s writings was a letter excommunicating a tyrant Coroticus who had carried off some of Patrick’s converts into slavery. Within his lifetime Patrick ended the slave trade in Ireland. The legend that Patrick drove all the snakes out of Ireland has to do with his spiritual warfare in driving the demons from the land.
The famous ‘Lorica’ – Patrick’s Breastplate prayer of protection expresses Patrick’s confidence in God to protect him from “every fierce, merciless force that may come upon my body and soul, incantations of false prophets, black laws of paganism, deceit of idolatry, spells of druids…”

Training others to spread the Word
Patrick was one of the first great missionaries who brought the Gospel beyond the boundaries of the old Roman Civilisation. Patrick’s missionary strategy was to concentrate on converting the tribal kings. As the kings converted, they gave their sons to Patrick to be trained as missionaries. From kingdom to kingdom, Patrick converted pagans, built churches, trained disciples, ordained deacons and ministers and built mission stations. Patrick provided pastors with written doctrinal standards with which to teach their people.

Evangelising Europe
For 30 years Patrick evangelised Ireland, converting many chiefs and kings, establishing over 300 congregations and baptising 120 000 people.
Patrick became an inspiring example for Celtic Christians. His life of continuous prayer, his love for the Scriptures, his love of God’s Creation and missionary vision inspired many hundreds of Celts to take the Gospel to Scotland, England and throughout Europe.