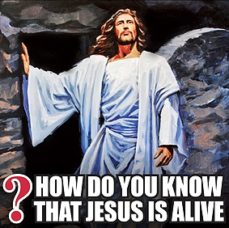 Skeptics Answered: How do you Know Jesus is Alive?
The Resurrection is so important and foundational to Christianity that it has been targeted for the most relentless attacks. A skeptical university lecturer, Josh McDowell, determined to disprove Christianity by investigating evidence against the Resurrection.

Researching the facts
The result was his conversion to Christ and publication of the monumental: ‘Evidence That Demands a Verdict’ which exhaustively and conclusively presents documentation and evidence upon evidence substantiating the historical truth, factual accuracy, archaeological evidence, manuscript evidence, fulfilled prophecies, transformed lives, and other indisputable evidences which support the fact of the Resurrection of Christ from the dead and the truth claims of Christianity.

Examining the evidence
Simon Greenleaf, recognised as one of the most skilled legal minds of all time, developed the Harvard Law School. He is recognised as the top authority on what constitutes sound evidence.

Greenleaf made a thorough examination of the objective evidence and the testimony of the four Gospel writers. In his book: ‘The Testimony of the Evangelists’ he concluded: “It was therefore impossible that they could have persisted in affirming the truths they have narrated, had not Jesus actually risen from the dead, and had they not known this fact as certainly as they knew any other fact.” Simon Greenleaf declared that any court of law, if presented with the evidence of the Resurrection, would have to give a verdict in favour of the integrity and accuracy of the Gospel writers and the fact of the Resurrection.

What are the facts?
The Jewish religious leaders had great concerns about the corpse of Jesus and they approached the Roman governor, Pontius Pilate, for a military detachment to secure the tomb (Matt 28:62-64).

The Roman governor’s priority in the volatile province of Palestine was to preserve peace and stability. He recognised the political problems that would ensue if anything happened to this religious Teacher whom he had three times declared innocent, and ultimately washed his hands in front of the crowd declaring, “I’m innocent of this Man’s blood” Matt 27:24.

Pilate was only too aware that a travesty of justice had taken place, and the last thing he needed was a review of his shameful conduct and dereliction of duty in this case. Ensuring that the victim’s corpse remained buried was definitely in Pilate’s political interests as well. “‘Take a guard’, Pilate answered. ‘Go, make the tomb as secure as you know how’. So they went and made the tomb secure by putting a seal on the stone and posting the guard.” Matt 27:65

The Roman guard
As the chief priests had approached the Roman governor, and as the Greek word ‘Koustodia’ is used to describe the detachment of soldiers, it was evidently a Roman guard. If only a temple guard had been used, there would have been no need to approach Pilate to issue the order. Additionally the concern of the guards after the Resurrection to be protected from consequences from the governor (Matt 28:14) confirms that those guarding the tomb were Roman soldiers.

The detachment would have consisted of at least 16 soldiers with four men placed directly in front of the entrance of the tomb, on duty, at any time. Under Roman military law any guard who deserted his post, or who fell asleep on duty, would face crucifixion. Anyone breaking a Roman seal without permission would be executed.

Although the intention of the religious and political leaders had been to ensure that the phenomenon of Jesus ended at the tomb, their extraordinary security measures have only served to confirm the truth that they had murdered an innocent Man and that Jesus Christ was truly the Messiah, the Son of the Living God.

Theories about the empty tomb
To explain away the empty tomb, the enemies of the Gospel have had to resort to some desperate deceptions. The first was to suggest that the disciples had stolen the body. This incredible theory suggests that those same disciples who had slept in the garden, fled at His arrest, denied Him before a young woman, were hiding in fear behind locked doors, could have unitedly overcome 16 professional Roman soldiers, dared to break a Roman seal, moved a two tonne tomb stone, just to steal a corpse!

A dead Messiah would have served absolutely no purpose for the disciples. What possible motivation could they have had, even had they possessed the ability to overcome the military, political and logistical obstacles? They had nothing to gain and everything to lose. Every one of the disciples suffered severe persecution, most dying as martyrs for the Faith. Would you die for a lie?

Did Jesus really die?
Others have questioned whether Christ had really died on the Cross. Perhaps He only fainted? This swoon theory would have us believe that the Roman soldiers, who were professional killers, (the centurion in charge, would most probably have supervised dozens if not hundreds of executions), had failed to ensure that this high profile political prisoner was not actually dead. Considering the vicious flogging which the Lord had already endured, the excruciating torture of crucifixion, and the spear thrust into His side, with blood and water flowing out, all provide convincing evidence of death.

Yet, those advocating this theory would have us believe that One Who had endured savage flogging, crucifixion and a spear to the heart, could not only have survived the legendary Roman military efficiency, but that He was revived on a cold slab. Further that He somehow disengaged from the grave clothes, and one hundred pounds of spices, ointments and wrappings which had effectively mummified Him, rolled away the two tonne stone, overpowered, or eluded, the Roman soldiers, and somehow found and impressed the disciples with His Deity? These suggestions have only to be mentioned to be dismissed as unbelievable.

The empty tomb
Another desperate attempt to explain away the Resurrection of Christ has been that they went to the wrong tomb. All of them. Mary Magdalene, Peter, John, the other women, all went to the wrong tomb. And somehow neither the Pharisees, nor the Sadducees, nor the Roman soldiers, nor Joseph of Arimathea, whose tomb it was, thought to point out that the tomb was in fact still occupied! However, this theory is also impossible, as the tomb was not in a cemetery, but in a garden privately owned by Joseph of Arimathea. There was no other tomb in that garden.
And all that the Roman and Jewish leaders had to do in order to end Christianity forever was produce the corpse of Jesus. But they couldn’t do it. “And with great power the Apostles gave witness to the Resurrection of the Lord Jesus.” Acts 4:33. Thousands in Jerusalem, including Pharisees, came to faith in Jesus Christ.

The crisis of credibility
To the Jewish religious leaders, this was their worst nightmare, a disaster. The proclamation of the Resurrection of Christ undermined their power and credibility. Thousands of their followers now believed that they had condemned an innocent Man, the Messiah Himself. The new religion of Christianity was undermining the power base and credibility of the Pharisees and Sadducees. Since they desperately needed Jesus’ corpse, the Jewish leaders would have used every means at their disposal to hunt it down and find it – if that was possible. However, we are not only dealing with the empty tomb, and the absence of the body, but the testimony of eyewitnesses. On at least twelve separate occasions Jesus Christ was seen after rising from the tomb.

To explain away the testimony of all these eyewitnesses, enemies of Christianity suggest that these were merely hallucinations. However, while hallucinations tend to be unique psychological experiences of an individual, we are here dealing with a large number of individuals, who at different times, in different groups, in different places, both indoors and outdoors, on a hilltop, along a roadside, by a lake shore, all saw the Lord. They saw Him, they ate with Him, they saw the wounds in His hands and in His side. And far from being gullible, it would appear that His disciples were very skeptical and slow to believe. Thomas declared that he would not believe that Christ had risen unless he personally placed his fingers in the nail prints in His hands and feet and his hand in the wound in His side.

Transformed disciples
Not only do we have the testimony of the eyewitnesses, but the dramatic transformation of the disciples. The Resurrection of Christ from the dead transformed the disciples’ grief to joy, their cowardice to boldness, their skepticism to faith and their doubt to determination. It turned Saul, the persecutor of the Church into Paul the Apostle of the Church.

It also transformed society and history. The very existence of the largest religious movement in the history of the world is another powerful evidence of the truth of the Resurrection. Jesus Himself had prophesied His Resurrection from the dead. And because of His fulfilment of this, we can be absolutely certain that Jesus Christ is God with us, as He claimed. By His Resurrection we can know that our sins are forgiven through His blood sacrificed on the Cross of Calvary.

We serve a risen Saviour! Death is defeated. Christ has risen – victorious over death, hell, satan and the grave. Jesus Christ is the Resurrection and the Life (John 11:25).

“Blessed be the God and Father of our Lord Jesus Christ, Who according to His abundant mercy has begotten us again to a living hope through the Resurrection of Jesus Christ from the dead.” 1 Pet 1:3