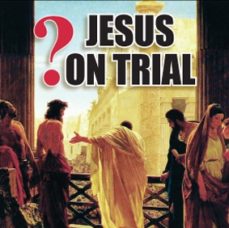 The trial of Jesus was a travesty of justice. It is a terrifying thing to be judged by a mob. Can you imagine being judged by your worst enemies? How would we have judged Him? Let us examine the evidence and question character witnesses. Of course, we could call forth millions of Christians throughout the ages who would eagerly testify to the incomparable goodness and greatness of our Lord and Saviour. However, we will call forward only skeptics and many of them enemies of Christ: Thomas Paine, who was an outspoken opponent of Christianity, admitted in writing: “Jesus Christ was a virtuous and amiable man. For the morality that He preached and practiced was of the most benevolent kind; and while those similar systems of morality had been preached by Confucius, and by some of the Greek philosophers, many years before; by the Quakers since, and by many good men of all ages, it has not been exceeded by any.”

Asking the skeptics…
The first century Jewish historian, Josephus Ben Mattathias, the author of ‘The Antiquities of the Jews’, wrote: “Now there was about this time Jesus, a wise man, if it be lawful to call Him a man, for He was a doer of wonderful works. He drew over to Him both many of the Jews and many of the Gentiles.

He was the Christ and when Pilate, at the suggestion of the principle men among us, had condemned Him to the Cross, those who loved Him at the first, did not forsake Him; for He appeared to them alive again the third day, as the prophets had foretold these and ten thousand wonderful things concerning Him. And the tribe of Christians named from Him are not extinct to this day.” (Antiquities XVIII, 33)

The greatest example
William H. Lecky was one of the leading historians of the 19th Century and the author of ‘The History of the Rise and Influence of the Spirit of Rationalism in Europe’. Lecky spent his life advancing the cause of rationalism, attacking Christianity and the supernatural. Yet, he admitted: “It was reserved for Christianity to present to the world an ideal character, which through all the changes of eighteen centuries has inspired the hearts of men with an impassioned love, has shown itself capable of acting on all ages, nations, temperaments and conditions. And has been not only the highest pattern of virtue, but also the strongest incentive to its practice, and has exercised so deep an influence that it may truly be said that the simple record of three short years of active life has done more to regenerate and soften mankind than all of the dispositions of philosophers and exhortations of moralists.”

Jesus: the translation of virtue
John Stewart Mill was perhaps the most influential and respected economist of the 18th Century. He often spoke out against Christianity, yet he had to acknowledge: “Christ is still left – a unique figure. It is of no use to say that Christ, as exhibited in the Gospel, is not historical in that we know not how much of what is admirable has been added by the tradition of His followers…who among His disciples, or among their proselytes, was capable of inventing the sayings attributed to Jesus, or of imagining the life and character revealed in the Gospels?
Certainly not the fisherman of Galilee …when this pre-eminent genius is combined with the qualities of probably the greatest moral Reformer and Martyr to that mission who has ever existed on earth, religion cannot be said to have made a bad choice in pitching on this Man as the ideal representative and guide of humanity; nor even now would it be easy, even for an unbeliever, to find a better translation of the rule of virtue from the abstract into the concrete then to endeavour to so live that Christ would approve our life.”

Recognising reality
Even as determined an enemy of Christianity as Charles Darwin, who popularised the theory of evolution, had to concede in an article written for a British newspaper: “Those who minimise the work of missionaries in pagan countries, forget, or will not remember, that human sacrifices and the power of an idolatrous priesthood; profligacy; infanticide; bloody wars where conquerors spared neither women nor children – that all of these have been abolished in these savage islands. And that dishonesty, intemperance and licentiousness have been greatly reduced by Christianity. In a voyager, to forget these things is base ingratitude. For should he chance to be at the point of shipwreck on some unknown coast, he will most devoutly pray that the lesson of the missionary may have reached thus far!” On another occasion, Darwin wrote: “The lesson of the missionary is…The house has been built, the windows framed, the fields ploughed and even the trees grafted. The…improvement, consequent on the introduction of Christianity throughout the seas…stands by itself in the records of history.”

An irreplaceable Man
Another hostile witness that could be brought to testify of the uniqueness of Christ was Darwin’s bulldog, Thomas Huxley. It was Huxley who first coined the word agnostic, which is what he claimed to be. Huxley did more than any other to popularise the theories of Darwinism – he was steadfastly opposed to almost every aspect of Christianity. Yet, in 1870, he wrote for The Contemporary Review: “I have always been strongly in favour of secular education, in the sense of education without theology. But, I must confess that I have been no less seriously perplexed to know by what practical measures the religious feeling, which is the essential basis of conduct, was to be kept up in the presently utterly chaotic state of opinion on these matters – without the use of the Bible. The pagan moralists lack life and colour. Take the Bible as a whole, make the severest deductions which their criticisms can dictate and there still remains a vast residuum of moral beauty and grandeur. By the study of what other book could children be so much humanised and made to feel that each figure in that vast historical procession fills, like themselves, but a momentary space and interval between two eternities and earns the blessings, or curses, of all time, according to its efforts to do good and evil?” When a fellow agnostic philosopher debunked the Bible, Huxley rebuked the man for putting on display his “conceited ignorance.” Huxley even had to go further in admitting: “The Bible has been the Magna Carta of the poor and the oppressed down to modern times. No state has had a constitution in which the interests of the people are so largely taken into account, in which the duties so much more than the privileges of rulers are insisted upon, as that drawn up for Israel. Nowhere is the fundamental truth that the welfare of this state, in the long run, depends upon the uprightness of the citizen so strongly laid down. I do not believe that the human race is yet, and possibly never will be, in a position to dispense with the Bible.”

The global impact of Christ
Another vocal skeptic who can be called upon to testify of Christ was George Romanes. He wrote many articles against Christianity during his lifetime. Yet, in his book ‘Thoughts on Religion’, Romanes observed: “Not only is Christianity thus so immeasurably in advance of all other religions, it is no less so of every other system of thought that has ever been promulgated in regard to all that is moral and spiritual. Whether it be true or false, it is certain that neither philosophy, science, nor poetry has ever produced results in thought, conduct or beauty in any degree to be compared with it. It is the greatest exhibition of the beautiful, the sublime…What has all the science, or all the philosophy of the world, done for the thought of mankind to be compared to this one doctrine – God is Love?”

The dominant figure in history
H.G. Wells is best known for his science fiction and film making. However, by profession he was an historian. Despite being a very outspoken critic of Christianity, H.G. Wells wrote: “Jesus of Nazareth is easily the dominant figure in history…To assume that He never lived and that the accounts of His life are inventions is more difficult and raises more problems in the path of the historian than to accept the essential elements of the Gospel stories as fact…

The historian must adhere to the evidence which would pass unchallenged if His book were to be read in every nation under the sun. Now, it is interesting and significant, isn’t it, that an historian setting forth in that spirit, without any theological bias whatsoever, should find that he simply cannot portray the progress of humanity honestly without giving the foremost place to a teacher from Nazareth.”

Unparalleled influence
The final hostile witness is the brilliant and volatile journalist and writer H.L. Mencken. Mencken dipped his pen in acid whenever it came to writing on Christianity. Mencken was the journalist who transformed the evolutionist’s legal defeat in the courtroom at the Scopes trial to a victory in the court of public opinion. Mencken declared: “This historicity of Jesus is no longer questioned seriously by…Christian or unbeliever.

The facts about Him seem to be beyond dispute…it is not easy to account for His singular and stupendous success…It seems to be certain that many persons saw Him after His supposed death on the Cross, including not a few who were violently disinclined to believe in His Resurrection…The most civilised sections of the human race have erected a structure and practices so vast in scope and powerful in effect that the whole…of history shows nothing parallel.”

So, here we have testimonies of some famous skeptics, some of them Christ’s enemies, over almost two thousand years, including: philosophers, a historian, evolutionists, a secular humanist journalist, an economist, a religious skeptic and a science fiction writer and Hollywood director. None of them were Christians. They all rejected Christianity. Yet, they all acknowledged that Jesus Christ was the greatest person to ever walk on earth. His impact on history and the Bible’s contribution to life and civilisation are incomparable.

A unanimous verdict
The verdict of these skeptics is unanimous. This One who was born in obscurity, who lived in poverty and who died in agony, became the most important and positive influence in the history of the world. No one has influenced the world for the good more than Jesus Christ. The chief priests in the Sanhedrin conspired against and condemned Christ. The Roman governor, Pontius Pilate, acquitted Christ three times, yet he ordered Him to be whipped and crucified to appease the mob in the streets.

The Day of Judgement will come
Today many presume to sit in judgement upon Christ. But the day will come when each one of them, and us, will stand before the judgement throne of Jesus Christ to give an account of our lives to Him. “It is appointed unto men once to die and after that the judgement,” Heb 9:27. The question is not so much what you think of Christ – but what does He think of you?