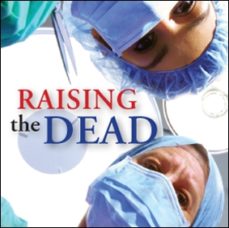 Raising the Dead: A Doctor’s Encounter
Dr Chauncey W. Crandall IV is a celebrated cardiologist on a personal spiritual quest. First, he brought a dead man back to life – with prayer. Now he has chronicled it all in a dramatic book called ‘Raising the Dead: A Doctor Encounters the Supernatural’. Many of us are skeptical of people’s claims to have been raised from the dead. Below is an extract from the book documenting this amazing story.
A fatal heart attack

“Jeff Markin was a dead man. In fact, he was officially declared dead at 8:05 am in a Florida hospital emergency room. The date was 20 October 2006.

Only 53 years old, Markin was a big, burly, ordinary guy, a mechanic by trade. And not a religious man by any means. Heart specialist Dr Chauncey Crandall was attending to his patients when he was summoned to the ER, but he knew his presence on the scene was not only a last resort – but most likely a lost cause.

Jeff Markin’s heart rhythm had flat-lined with cardiac arrest from a massive heart attack. A full 40 minutes had come and gone since his last heartbeat. His pupils were fixed and dilated – he’d been ‘down’ too long. By the time Dr Crandall arrived at the emergency room, Markin’s heart had already been shocked six times with the defibrillator. Just to make sure, his non-beating heart received a seventh shock, also to no avail. Rounds of medications and other efforts had all failed to revive the patient.

Declared dead
Markin’s lips, fingers, and toes had literally turned black with death from a lack of oxygen. There was no doubt – he was dead. After Markin died, nearly everyone left the room. (Nobody wants to remain around the smells and spectre of death). While a nurse prepared Jeff Markin’s lifeless body for the morgue, Crandall remained in the room to write up his final report. Then, once he completed his paperwork, Dr Crandall headed toward the door to return to his own patients. Standing in the door’s threshold, however, he was overcome with a strong feeling. It was a deep-seated sense that God wanted him to turn around and pray for Markin.

God’s intercom
At first, Dr  Crandall – a man of science – was somewhat reluctant, even embarrassed. He felt foolish. But the request from God came to Crandall again, even more compelling this time. So he felt called to heed the message. As Dr  Crandall put it, he felt like ‘God’s intercom’. And even though the words Crandall said came through him, he had no sense of devising them – they poured from him of their own accord.

“Father God,” Crandall prayed, “I cry out for this man’s soul. If he does not know You as his Lord and Saviour, raise him from the dead now, in Jesus’ Name.” Then another strange thing happened. Involuntarily, Crandall’s right arm shot up in a gesture of prayer and praise. At that moment, the ER doctor came back into the room and Crandall ordered him to give Markin what seemed like one more useless shock from the defibrillator.

Returned from the dead!
At first reluctant, the doctor finally did as Crandall asked, and applied the defibrillator. Immediately, the machine registered a perfect heartbeat. Jeff Markin started breathing on his own; his black, cyanotic toes and fingers twitched. Soon, he began to mumble.”

Chauncey Crandall would never be the same again and he believes that this story will also transform the lives of others who hear it. For Dr Crandall, the story doesn’t end with Markin’s second chance at life. It’s actually what happened earlier that proves even more compelling…

A parent’s worst nightmare…
Historically, Crandall kept his conventional Christian faith and his medical practice separate. Until June 2000, when he was confronted with the worst nightmare a parent can face – his son Chad’s life-threatening illness. 11 year old Chad and his twin brother, Christian, were happy and athletic boys born to Chauncey and his  high-school sweetheart wife, Deborah.

Chad’s diagnosis of a deadly form of leukaemia hit like a bombshell and Dr Crandall found himself crying out, “Lord, if You are real, You have to heal my son.” After the diagnosis, Dr Crandall cut down his medical duties so he could learn more about the treatment of leukaemia – and also research what the Bible says about healing.

Looking for others with faith
He sought like-minded Christians in his area but was disappointed to find that most of them did not truly believe in the power of prayer to heal. So Crandall had to travel the world and take some unusual paths in his quest for supernatural healing through Christ.

Surely, he thought, there were those who still believed in God’s power to heal through prayer? Eventually he found a group that does and he now regularly speaks at conferences organised by the World Christian Doctor’s Network. In fact this year he was again a keynote speaker at the recent 7th Annual World Christian Doctors Network ‘Spirituality and Medicine’ conference.

Crandall was one of some 240 Christian doctors from 40 countries around the world joined together to prescribe ‘spiritual healing’ as an answer to sickness in the 21st Century. They believe that medicine alone cannot deal with some of today’s worst illnesses. And once again, he presented the amazing case of Jeff Markin before his peers, bringing documented evidence of the raising from the dead of this car mechanic at the gathering. Crandall also prayed for many of the doctors who, themselves, were sick – and saw many of them healed.

One man’s quest for Christ
Of course, Dr Crandall did not neglect modern medicine for his son Chad. He sought out the best doctors, the best medicine, and the best facilities in the country. Yet it wasn’t enough. So he became bold in his spiritual enthusiasm. “I believe completely in supernatural healing, and I’m clear about God being the healer, not me,” he says. In ‘Raising the Dead’, you’ll walk  in Dr Chauncey Crandall’s shoes and discover:

How the grace of God can help you overcome disease
Spiritual interference that can come from innocuous-looking objects or books, even leading to seemingly unrelated health problems
The problems with and causes of ‘why-me’ thinking when something bad happens to you or a loved one
How prayer, praise and thanksgiving can do wonders for stress, and even eliminate the need for medications
Using the ancient principle of exchange to benefit your life.

Supernatural healings
You’ll also hear about multiple instances of modern supernatural healing and divine influence including:
A crippled woman brought in by wheelbarrow who walked away from a Mexican mission post after a healing service
God’s protection from a modern-day stoning attack

Honour your body
During his son’s illness, Crandall realised how important it is to stay in shape and take care of yourself. God has work for you to do – and illness will only present a roadblock to your spiritual growth. As Dr Crandall puts it: “It’s important as God’s servants to honour the body as God’s Temple. Otherwise, we give the devil an easy opportunity to shorten our service to God. “

Additionally, Chauncey Crandall came to realise just how much the physical and spiritual are intertwined. He says that the Lord told him, “I’ve given you a platform as a physician to win the lost for Christ.” Chauncey knows he still has much work to do as a Christian physician.

Dr Crandall says, “My medical practice is now based on providing my patients with the best of medicine and the best of Jesus.”