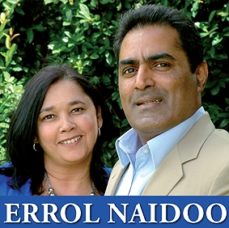 Errol Naidoo, an ordained minister, is a preacher of this kind. A man of principle, perseverance and passion, dedicated to protecting people. Growing up in a community plagued with troubles, Errol witnessed the challenges that so many experience in this country. But through adversity, character is refined, and it was in this trying context that Errol dedicated his life to Christ, and stepped into the calling of God. From pastoring to dealing with media, Errol has expert grounding for the work he does today as President of Family Policy Institute. Many Christians would know of Errol through the articles he writes in JOY! and specifically the work he does in the public sphere – lobbying between government and the Church for the sake of upholding Biblical morality. The work Errol does is vital to the Body of Christ, and is for all of our benefit – yet there are still many people who are unaware of his role, or, critical of his work – as they do not understand the purpose of Biblical advocacy.

Why did you enter the ministry?
I was called into the ministry by Paul Daniel in 2000 to pioneer His People Christian Church’s Public Affairs department. My responsibilities included addressing governmental and media issues from a Biblical perspective and representing His People on various Church bodies. I was ordained as a pastor in March 2003 and was a pastor at His People Church in Tokai until 2009.

Do you still preach?
Yes, I am often invited to preach at churches and speak at conferences – specifically in relation to the work I do with Family Policy Institute. I am privileged to work closely with ministers and leaders across all denominations and from various organisations.

What is Biblical advocacy?
Biblical advocacy entails pro-actively advocating, promoting and advancing a Biblical Christian Worldview of life in all aspects of society. Christians are called by God to be “salt and light” to society. That means an active and uncompromising engagement of our culture to further the cause of Christ.

Why did you move into this area?
During 2006 after same-sex ‘marriage’ legislation was railroaded through Parliament, God spoke to me about transitioning my role in the local church to serve the greater Body of Christ to help inform, educate and equip it to fulfil its mandate to be salt and light. The vision for FPI was crystallised during my internship with Family Research Council in Washington DC. Following my six month training in the US, I returned home in October 2007 and established Family Policy Institute for the glory of God.

What is the role of FPI?
FPI’s vision is to mobilise and equip the Church of Jesus Christ in South Africa to pro-actively impact and influence the political and social sphere of our nation with Biblical Christian values and principles. My goal is to establish the sacred institutions of marriage and the family as the central focus of government’s social policy development. By networking churches, Christian organisations and ordinary citizens, FPI seeks to strengthen the Christian voice in our nation.

What are the highlights of the work you have done thus far?
Highlights include mobilising Christians to oppose and stop the blasphemous misuse of the Name of Jesus in UCT’s Sax Appeal magazine, successfully compiling FPI’s research on prostitution, hosting a conference on the harm of pornography on society in partnership with the Films and Publication Board and mobilising thousands to make submissions to the SA Law Reform Commission on prostitution.

Because of committed prayer and deliberate Christian action, prostitution and sex-trafficking was the lowest it has ever been in a World Cup tournament, at our event last year. Often citizens feel powerless to affect change in our nation, but a gentle stream consistently moving will eventually wear away the insurmountable boulder.

What are the lowlights?
A major challenge is the lack of a Biblical Christian worldview amongst Christians. Without a Biblical worldview, Christians are unable to discern the times we are living in and more importantly, their critical role in impacting the culture. Many Christians are more influenced by the liberal media than the Word of God. Thus they become apathetic or worse – are critical of Christians who are standing up for righteousness and justice. Instead of recognising this as Biblical advocacy, they see it as judgementalism.

What is the most concerning problem for you in South Africa?
The biggest challenge facing South Africa is family breakdown. Dysfunctional families are a catalyst for a host of social ills. If we fail to restore and strengthen the family, we have little hope of building a strong, healthy and viable society. South African society is only as strong as the family.

How can churches work with you?
I seek to partner with Pastors across the country with the specific intention of uniting the Church in our common purpose. Transformation cannot happen without God’s anointed leaders actively involved in society.  I am called to serve the Church to help it fulfil its Biblical mandate to oppose evil and advance righteousness.

How can the average man in the street support the work you do?
The first thing Christians need to do is subscribe to FPI to receive my weekly updates. The more Christians that are informed, educated and equipped – the greater our influence and impact in the nation! FPI works on behalf of and together with Christians for common purposes. It is not about one person taking the lead or the glory, but rather about collective effort culminating in focused and effective Christian action, through a channelled voice. Christians, churches and companies can also partner with FPI in prayer, financially and by participating in social action.