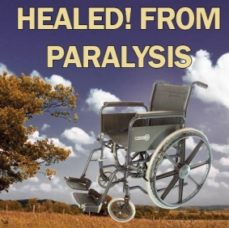 She never missed church, but it was nerve wracking to get her there. First her wheelchair had to be moved near the car. Then she had to be helped out of the chair and carefully positioned to get inside. Her husband would beg her to stay at home. Tears of pain would roll from her eyes, but her jaw remained firm.
She would not be denied another opportunity to be in the House of the Lord. “Take Quasimodo to church,” Jean Neil would say, gritting her teeth, with a fierce little twinkle in her eye. During each meeting Jean would only be able to sit on a thick cushion for a few minutes. Then the pain would become unbearable. For that reason many prayers were made for her healing.

Years of unanswered prayer
The pastor prayed, the youth group prayed, the women’s group prayed. Always her friends searched for answers, “Was something wrong with their prayers? Why wouldn’t God heal such a faithful servant as this?” Jean never lost hope, but her faith went through many ups and downs. She had developed a strong and defiant will to thrive in the face of great odds. In spite of her condition, Jean took an active role as a youth leader. Then something happened that would change her life forever. A three year old toddler at church, a little boy, walked up to Jean and asked to pray for her. She took his little hands in hers and let him pray his simple, childlike prayer. He asked that God would heal her.

Two powerful dreams
Something began stirring, deep in Jean’s soul. That night she had two distinct and vivid dreams. First she dreamt she underwent spinal surgery and died on the operating table. She watched the doctor tell her husband that her heart simply had become too weak to endure the procedure. She awoke with a start. There could be no mistake about the meaning of this dream – if she chose to go with the surgery, death was coming for her. She went back to sleep.
This time Jean had another very different dream. She was in a large room with 12 other people in wheelchairs. She heard the voice of a man speaking. It was a distinctive voice with a foreign accent. She saw the man emerge in front of the wheelchairs. He went to the first and prayed for a woman and commanded her to get up. She got up, but then sat back down in utter defeat. Then the man came to Jean’s chair, he prayed for her and she took off running from her wheelchair, totally healed.

Believing for a miracle
The next day Jean visited her pastor. She was frightened. He said that a whole new life could be near for her – a life of health and wholeness. She had to choose which dream to believe, the dream of death or the dream of life? Two weeks later a youth convention was to be held in a nearby hall. She heard that I would be the speaker. She had her husband John prepare a special ambulance for her to ride in. The morning of the meeting I felt a strong urge to pray. As I prayed, I sensed the presence of the Holy Spirit with me in an unusual way. I began to ask, “Lord, what do You want to do today? What miracle will You perform in this meeting?”

A divine connection
The cavernous room was filled with nearly 12 000 delegates. I sat on my chair and waited to be announced. I looked across the crowd and continued in deep conversation with the Lord. “Lord what are You doing here tonight?” As my gaze fell across the wheelchairs, the Lord directed my attention to one lady at the far left. I sensed the Spirit saying to me, “That woman in that wheelchair will be healed today.”
From her wheelchair Jean watched me on the stage. She thought that I certainly bore a strong resemblance to the man in her dream. When I got up to preach, Jean knew my voice from her dream. The tone and the accent seemed identical. She began to feel a powerful sense of anticipation. I was on fire with the Spirit. I preached a salvation message. Nearly 1 500 responded. It was a glorious day. Then suddenly, the host of the meeting came to me on the platform and said, “Reinhard, I have hired this room until only six o’clock. We have to clear the room.” I looked at my watch and saw that we had 15 minutes before the room had to be cleared. I was stricken as I had not prayed for the sick.

The power of prayer
Without delay I hurried down from the platform and went to the first wheelchair I saw in front of me and said, “I want to pray for you.” I placed my hands on her. I could feel the power of the Spirit like electricity in my hands. I prayed, then said, “Stand up in Jesus’ Name.” She stood, but she was very shaky. She sat back down. I knew she was not healed. “Oh, no”, I thought, “this is not the woman God showed me.”
At this point, someone in the room had a video camera running. What followed was recorded and has been viewed again and again by many audiences over the years since this meeting. I remembered that the woman God had shown me was to the left. I hopped up, and looked to the left until I saw her. Then I raced all the way across the room, the camera following me. Jean Neil was sitting in that wheelchair, her husband John stood behind her, gripping the handles of the chair. I glanced at John, and he looked at me with a stare as cold as stone.

A miracle!
I knelt down in front of Jean, and said, “I’ve come to pray for you. You’re going to be healed today.” I will never forget her reply, “I know, I know, I know!”  I laid my hands on her and I prayed. Then I commanded her to stand up. Slowly, with great determination, she stood up, and then she sort of slumped forward onto the floor. I thought, “Oh, no, Lord what have I done?”
But then I realised she had not collapsed back into her wheelchair, she had fallen forward. This was in the right direction at least. I quickly bent down over her. I said, “Jesus is healing you.” At this point, as Jean tells it, she felt powerful, incredible things happening inside her body and was being pulled straight. She felt her hips go into their sockets. I said to her, “Get up, in Jesus‘ Name.” I looked at John and thought he would punch me. He said, “What if she falls?” I said, “I’ll be here. I’ll be here. Now, get up.” Slowly Jean began to gather herself from the floor. She stood to her feet. “Now, walk in Jesus’ Name.”

A life changed forever
The video camera was rolling. People were standing on chairs all around us. We were totally surrounded by onlookers. Before I could tell what happened that woman was gone. Jean Neil raced around that building, hands in the air, praising God, crying with joy. The place was bedlam. So much crying and praising God. So many tears of joy. Only after arriving back home did I learn the full extent of this miracle…only years later did I hear of her dream. Praise God! 