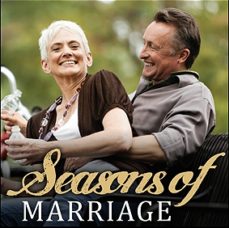 Seasons of Marriage
Over the years I have listened to the stories of many people who have experienced family break-up, but one small boy sticks out in my mind. He was ten years old and his father had just left his mother. He was sitting outside his house, looked up and said, “My father doesn’t love my mother anymore and he has left us now – what does a kid do?”

But it’s not just young children who feel this way. Laura Telfer, a counsellor for 18 years, says that splitting up when the children are older can seem like an attractive option: “There is definitely a susceptible time when the children leave home when all possibilities seem open. But it does not make the unexpected desertion any easier. What can be an exciting venture for one partner is invariably a painful grieving episode for other family members. Children watch appalled as their family, that secure and safe place that survived all their childhoods, is swiftly dismantled.”

The biting winds of winter
If the course of married life has seasons, then most begin in summer. They are days filled with warmth when we not only say we are in love, but we feel in love. Of course, to love in summer is relatively easy but marriages that are to last have a much harsher test ahead: the challenge of  ‘August love’ – of surviving the winter of our relationship. Whereas our relationship in summer was characterised by warm breezes, we find that biting winds now test our love. These are dark and cold days, but there is no relationship that does not, at some time, have to love in August: that has to love, at least for a while, not ‘because of’ but ‘in spite of’.

Loving ‘in spite of’
Marriages break up, relationships fail – those things are a fact of life. But it’s also a fact that we will never find a lasting relationship with anybody unless we are ready at some time to fight to keep our love alive against the odds – to love in August.

I remember counselling a couple in their mid-twenties; they had a baby and were about to divorce. I asked the man why he wanted to divorce his wife. He said, “I don’t feel in love anymore.”

As he spoke, I couldn’t help but gaze at the little bundle that his wife cradled in her arms. I said, “Did nobody tell you when you married that there will be times when the feeling of love will diminish? Did nobody warn you that love that lasts, does so by loving – at least for a time – with not the heart, but the will”? He looked genuinely surprised. “No,” he said. “Nobody told me that.”

Nobody told him this and yet grasping this simple principle would allow many relationships that fall at the first hurdle to at least have a chance of surviving. You will not keep your family together if a prerequisite is that you and your partner always feel in love. Couples that stay together are prepared to go through periods in their relationship where commitment, responsibility, and sometimes ‘what’s best for the children’ is what keeps them together. ‘For the sake of the kids’ is not always the right reason to stay together, but it’s still a good reason. None of us want to live our whole lives loving with gritted teeth, but there are thousands of couples who tried again, perhaps ‘for the sake of the kids’ and in the process rediscovered a love they’d thought was gone forever.

In almost every marriage there will come a time when the ‘feeling’ of love is at a very low ebb. Such times may creep up on us over the years or may be linked to specific strains in the relationship – the birth of a child, financial pressure, sickness, or redundancy.  And it’s at this point that something sometimes enters the relationship that, in its ability to destroy families, is in a league of its own: the affair.

The price tag of an affair
Some time ago I met Jeremy. He too had reached a period in his marriage when he no longer ‘felt in love’.  Whether that was hastened by him being attracted to a woman in his office is something we’ll never know. But I suspect his marriage had been going through a stale patch, and the new woman made him look at his wife and his life with a growing dissatisfaction.

He told me his story on a rainy Saturday afternoon in a McDonald’s next to a cinema complex. He was now divorced and had recently broken up with the woman he’d left his wife for. He had access to his children once every two weeks. They were sitting at a nearby table, colouring and looking bored.  He said, “It’s hard to know where to take them if it’s raining,” and then added, “I’d like to tell all the men out there that the affair is great – for a while. But it’s just not worth it”.

“These are my kids, for goodness’ sake. I’m their father and I’ve just been with them for three hours stuck in a lousy cinema because there’s nowhere else to go, and now I have to take them back like a couple of library books.”

I’ve seen all kinds of things destroy families. But I believe that nothing comes close to ‘the affair’ for having the ability so quickly and with such surgical skill to decimate families – and often for so little. It’s as if the affair whispers: “Trust me. I know you’ve heard what this can do to families, but it will be different for you. Just take the next step.”

Of course, the end results of an affair can vary. Some people find new and fulfilling relationships, and some feel cheated after just a few days, but in my experience those involved in an affair always exhibit the same two characteristics.

The stages of an affair
The first is  ‘a period of temporary insanity’. During this time, people act totally out of character. They set aside previously held personal or religious beliefs. They sometimes begin to dress differently – perhaps younger, more daring, and almost everything in their lives – children, job, home –  comes second to the sheer thrill of this affair. During this period, people often ‘rewrite’ the story of their lives. They say things such as, “We were so young when we got married – we didn’t really know what we were doing,” “We’ve never really been happy,” “I was always dissatisfied”. It’s not that they haven’t gone through difficult times, but the trick of the affair is that it manages to wipe out every memory of love or happiness that ever genuinely existed. The second period always follows – within a few weeks or sometimes a few years – but there is no exception. It’s a moment when reality kicks in. For a while, everything in the new relationship is thrilling and fun, but eventually the excitement dies and the couple discover that even in their new love nest the taps still leak, the bills still need paying, and babies still wake up crying. In short, they discover that ‘the other man’s grass may be greener, but it still needs mowing.’

Losing everything; trying again
It’s as if at the beginning of the affair the cost was negligible, but that quickly changes. In the early stages the price is rarely on the ticket – in fact, initially the price tag reads, ‘Free’. There’s no harm in it – some flirting, a little time together. But as it progresses, suddenly it’s more expensive. It now calls for a little deceit – ‘I’ll be home a little later on Tuesday, darling.’  They say to themselves, ‘This is the person I should have married.’

Then one day, they walk into the shop and the price tag has changed for the last time. And now it reads: ‘Everything’. They gasp when they see it. They protest that they couldn’t possibly pay it without losing almost everything they’ve ever loved – their husband, their wife, their kids, maybe their friends and wider family, and perhaps their home or even their job.

Can marriages recover from affairs? Of course. Can those marriages be stronger than they were before? Yes. But the affair is a breach of trust so great that it tears at the very heart of a relationship, and although the love may return, it may take a long time for trust to be restored. Sometimes, even for the sake of our own long-term happiness, we have to begin with not what is ‘best for me’, but for them.