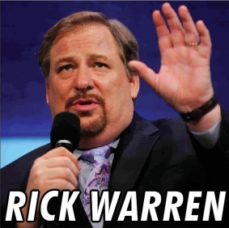 To say that Rick Warren is an influential leader at this juncture in history would be a profound understatement. He has consulted with presidents and with paupers. His books have sold over 30 million copies and his Saddleback Church in California sees about 20 000 weekly attendees. Over 400 000 pastors and church leaders have completed his courses and he has more than 1 million followers on twitter.
No stranger to criticism…
Yet despite the fanfare and celebrity, Rick is surprisingly unaffected and extremely candid in his interviews and online communication. And perhaps he has to be, as Rick is watched by Christian critics and secular media closely. He is no stranger to public scrutiny, having been accused of “being a free mason”,  “a new ager” and “the founder of Chrislam” (a religion that blends Christian and Islamic beliefs).
Living under the microscope
For several years now, JOY! has been following Rick’s ministry and evaluating his teachings. We have investigated the claims mentioned above (all mostly based on rumour, malice and ignorance) and found Rick to be a compassionate Christian leader committed to spreading the Gospel through word and deed. He is endorsed by his peers (who include noted theologians such as John Piper) and the Christian community at large.
Tactical faith
Interestingly, despite Rick’s responses to the accusations against him, the detractors refuse to accept the answers. It is almost as if they want to “demonise” him and the way in which he lives out his calling.
Perhaps this stems from a misunderstanding of leadership at that global level – what often seems like a “seeker sensitive” approach by Rick Warren and Co, could possibly be a strategic plan to build bridges and unite on issues of common interest (eg: joining with people of other faiths to take a stand against abortion and protect  the traditional definition of marriage, working toward global peace etc.)
For Rick, this strategy strives to grow the Kingdom of God and advance Biblical values, albeit in a different (tactical) way to how one would work at a grass-roots level.
Answering the detractors
Tackling one of the most persistent rumours, Rick asserts: “The Chrislam [allegation] is 100% false. If the guy who started this libelous myth, or anyone else who passed it on, had obeyed our Lord’s command (Matt. 18:18-20) to come directly to me, and asked what I actually believed – they would have been embarrassed to learn that I believe the exact opposite.
As a 4th generation Christian pastor, my life and ministry is built on the truth that Jesus is the only way, and our inerrant Bible is our only true authority.”
The truth…
“As an evangelist, I spend much of my time speaking to non-Christian groups. You cannot win your enemies to Christ; only your friends, so we must build bridges of friendship and love to those who believe differently so Jesus can walk across that bridge into their hearts.
[We are] commanded by Jesus to love our enemies. In the past ten years, Saddleback Church has baptised over 22 000 new adult believers – simply because we express love to those who don’t know Christ yet.
It is nonsense to believe that you must compromise your beliefs, or water down your convictions in order to love someone, or even just treat them with dignity. Jesus was called “the friend of sinners” by the legalistic Pharisees because he hung out with (and loved) unbelievers. I hope you will:
(1)  Always believe that everyone needs Jesus as their Lord and Saviour
(2)  Have the courage to associate with nonbelievers in order to love them and bring them to Christ
(3)  Consider being called “a friend of sinners” a Christ-like compliment
(4)  Refuse to pass on rumours until you’ve checked for the truth with the person accused. The false statements above should be removed [from the public space, websites and internet blogs].”
Reflecting Christ in the valley
Earlier this year we set up an exclusive interview with Rick and Kay to discuss some of the critiques against their theology, but unfortunately the interview was put on ice after Matthew’s death.
The Warren’s have handled this tragedy with remarkable tenacity and grace. They have tried to remain positive, whilst at the same time working through their grief. The couple have slowed down on their commitments, but have continued to work on their respective projects.
Moving forward in His strength
For Kay, this involves her extensive charity work, for Rick the launch of his new book (‘What On Earth Am I Here For’ an updated version of ‘The Purpose Driven Life’). The two are also passionate about global missions and “attacking the five global giants” of poverty, disease, spiritual emptiness, self-serving leadership, and illiteracy.
For Rick, this takes form through ‘The PEACE Plan’ an initiative that mobilises Christians around the world in an outreach effort to demolish these five pillars by promoting reconciliation, equipping servant leaders, assisting the poor, caring for the sick, and educating the next generation.
To date they have achieved a phenomenal success rate, helping millions of people and also spreading the Gospel. We wish the Warren’s well and pray for them to always stay true to the Word of God no matter what public pressure is imposed upon them. May they live a life worthy of the calling of the Lord (Ephesians 4:1).