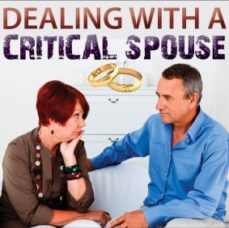 It has been said that what we focus on becomes larger in our lives. This truism seems applicable not only to the goals and dreams we have (and this can be a good thing), but also for the little annoyances that interrupt our marriage.
Living the dream
Consider Jeremy who is a 45 year old successful banker. He has achieved essentially all of the goals he set for himself twenty years earlier.
He has a thriving law practice, a lovely home and a marriage of 22 years with three vigorous teenage child-
ren. Jeremy is also active in church, where he has filled a number of leadership positions. He loves his church family and the friendships he has made there.
A critical issue
But, Jeremy has a growing problem. He has become more critical as time has gone by on some of his wife’s foibles.
He notices, and comments upon, the house being in disarray during any particularly busy week. He criticises the few extra pounds she has gained over the years. He shows his displeasure in his children’s misbehaviours and less than perfect grades. Jeremy has become critical and vocal about his complaints.
Mountains out of molehills
You might already guess the impact of his negativity on his marriage and relationship to his children. While his perfectionism has helped him thrive financially, it is driving a wedge between him and his wife and children. Furthermore, it seems the more he focuses on these issues, the larger they become to him. He has become miserable over time.
The effect on those around you
To be fair, Jeremy has some awareness that his critical nature isn’t serving him well. He can feel the rift grow in his marriage. He wonders if he is too critical, if he should “let some things go.” But, he doesn’t, and they become a wedge in his relationships.
“I have this feeling that I should cut everybody more slack, but I can’t seem to help it. I see the problems and I want to solve them. I think my wife should lose weight. I think my kids are capable of better grades.
I think our home can be kept neater and my kids can do a better job of helping out around the house.”
“What effect, Jeremy, is your critical attitude having on your relationships?” I asked.
Is criticism helpful?
“Well,” he said bashfully, “you don’t really need to ask that question. My wife doesn’t like me nagging her. My kids run when they see me coming. Even my
colleagues seem to be stepping away from me. It’s not working for me.”
Monitor your behaviour
I applauded Jeremy for setting up this counselling session, and coming to talk to me was taking the first step toward change. He was doing what we call
active monitoring of his behaviour, seeing that if he continued to be critical,
especially in the absence of encouragement, he would lose the respect and closeness with those he cares about. We outlined these additional steps:

Focus on the positive
Like many others, Jeremy has become
obsessed with the negative. As a result, these issues have grown in his mind. What we focus on becomes larger in our minds and so he must find things to compliment his wife and children on. He must have a counter-balance to his destructive tendencies.
Scripture offers this advice: “Whatever is true, whatever is noble, whatever is right, whatever is pure, whatever is lovely, whatever is admirable…think about such things.”
Phil 4:8. Applying this Scripture isn’t just good for our relationships, it’s good for our soul. As we hide Scriptures such as these in our hearts, we find our attitudes changing for the better.

Keep things in perspective
While Jeremy may have justified issues of concern, they must be kept in balance with the larger picture. Is his wife’s weight gain really that significant? Are his children’s grades really that concerning? Is the house really that messy? Often when we focus on a problem, it seems larger than it is in reality.
Talk things through with a friend
Jeremy would do well to find someone to whom he can externalise his concerns. Keeping them bottled up will often only amplify a concern.
Airing them out with a trusted friend will help him gain a healthier perspective.

Positive encouragement
Jeremy may have legitimate concerns, but an obsessive focus on them erodes his well-being and causes a rift between him and those he loves. Criticism rarely changes the issues that concern us. Positive encouragement and support are the factors that often lead to effective change.  

Dr. David Hawkins is the director of The Marriage Recovery Centre and has been helping couples in crisis restore their relationships for over 30 years www.marriagerecoverycenter.com