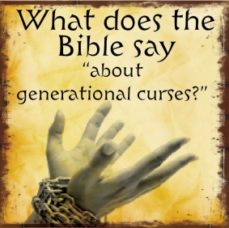 The concept of the “generational curse” is [often an integral focus] of deliverance ministries. Generational curses are mentioned only in the Old Testament:
“You shall not bow down to them or serve them, for I am a jealous God, visiting the iniquity of the fathers on the children to the third and the fourth generation of those who hate me, but showing steadfast love to thousands who love me and keep My commandments.” Exo 20:5-6.
The generational curse mentioned in the Bible, then, was a warning given to the Hebrews that they were to worship only the Lord, not idols. If one generation fell away from God and worshiped pagan gods, God warned that He would “visit the iniquity” on several future generations. How is this fair? Everything an Israelite did affected the entire nation (see Joshua 7). Since the Messiah of the was to come out of Israel, all of Israel needed to follow the Lord.
What the Bible says
But God did not leave the Israelites with no hope (Lev 26:39-42). Numbers 14:19-20 shows that forgiveness was available to all Israelites. And Exodus 20:6 explains that God’s loving-kindness to those who repented and followed the Lord would be granted for thousands of generations. This clearly infers that the generations being punished for their fathers’ sins did not repent and seek forgiveness, but continued their fathers’ evil ways.
In Christ we are free
The threat of the generational curse is over, however. Jeremiah 31:29-31 and Ezekiel 18:1-4, 14-20 all say that under the New Covenant the son will not be punished for his father’s sin. We are freed from the generational curse. Jesus’ sacrifice heralded the coming of the New Covenant (Luke 22:20), and we enjoy the benefits. So how is the concept of “generational curses” used today if the Bible so thoroughly explains it is no longer valid? Some deliverance advocates seem to just ignore the evidence. Others believe that a generational curse is only handed down to non-Christian family members; once a person accepts Christ, he is free. But a sin or hardship can be passed down from generation to generation via a demon that stays with the family.
Such a family may have a history of cancer or unfortunate luck with finances. They teach that a child can be inhabited by the family demon, which can remain dormant until awakened by sin. Accepting Christ for salvation breaks the generational curse, because we are under the New Covenant, but it does not remove the demon, which can still wreak havoc. The cure is to repent of any sin affiliated with the curse and rebuke the demon.
The bondage of sin
There are issues with this. Generational curses were never said to involve demonic forces. Exodus 20:5-6 and the other verses clearly state that God punished the generations. There is no mention of “bondage” or illness or even the curse of a sin passed down by the work of a demon.
Are there generational curses today? Not in the sense mentioned in the Old Testament. It is true that whether by influence or genetic predisposition, families can see sins like addiction or rage pass through several generations. “Bondage” issues such as ill health or misfortune can be explained the same way. A demon is not necessarily the cause of heart disease in the children of parents who don’t know how to eat healthily.
Understanding deliverance
“Deliverance” from such a situation is straightforward for the most part. We take our sin to Christ, ask Him to heal us, and work with Him by refusing to continue sinning. For health issues, we can ask for healing, but it doesn’t mean God will see fit to cure us. If one generation rejects God, it doesn’t mean a demon will give the next four generations diabetes. 
By Got Questions

How should you pray when under demonic attacks? Here are a number of guidelines that we trust will be useful.
Carefully study each of them and apply it to your life. Much more can be said, but these few pointers are sufficient to lead you into victory.

JERICHO WALLS is an interdenominational Christ-ian prayer ministry committed to building a strong prayer network to support the Church to fulfil its calling as a “house of prayer for the nations”. www.jwipn.com