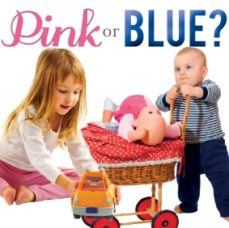 Psychologists are often asked by anxious parents if it is normal for their little boy to play with dolls, or for their girl to be so interested in cars and other toys supposedly reserved for boys. Often the parents worry that the tendency to play with transgender toys will result in later sexual identity issues.

Typical gender behaviour
Gender socialisation teaches children appropriate gender behaviour as prescribed by their parents and community. Baby boys are dressed in blue and are given cars to play with, whilst ‘princesses’ are surrounded with pink outfits, Barbie dolls and pastel decor.
Research showed that toys bought for girls tend to be round and pink, while toys for boys tend to be angular and blue. Parents also expose children to gender appropriate activities like ballet or karate, and serve as primary gender role models – often verbalising their gender ideals and expectations.
Interestingly one study on infants of 12-24 months showed baby girls spending more time looking at dolls, whilst baby boys spent more time looking at cars. Most children also prefer same-sex play mates, and choose those with
similar play styles. It is common for girls to engage in more nurturing and
mothering type play, while boys show greater preference for rough-and-tumble activities.
However, it is also very common for girls and boys to prefer opposite-sex playmates and to engage in gender atypical play styles. In our society where gender roles have become less rigidly defined, it is quite the norm for children of both sexes to play the same games. Small children who are still learning about their place in the world also ‘test’ the different gender roles through imaginative play – a normal process in trying to understand how the world around them works.
Parenting little boy pink and the reluctant princess
Parents should accept early transgender play as a normal developmental stage and support children in expressing these interests at home in an age appropriate manner.
Unfortunately fear and ignorance surrounds this behaviour and has resulted in many a father angrily calling his son a ‘sissy’ for wanting to play with his sister’s dolls. Mothers also sometimes feel uncomfortable with the ‘tomboy’ behaviour of girls. Often parents fear possible homosexuality, and in their anxious attempts to rectify it they bestow a derogative label, thus communicating non-acceptance and rejection.
It not only leads to broken relationships, but for some children to later question their own sexual identity. Parents should refrain from overreacting and remember that their little boy will one day be a father who will have to nurture his own children, so changing the doll’s diaper is really not so inappropriate at all!

Persistent nonconformity
When prepubescent children display more persistent gender nonconformance, together with a strong identification with the opposite sex, it could be indicative of more than just a normal developmental stage. Nonconforming is expressed in behaviour/attitudes like cross gender clothing, identification with characters of the opposite sex in stories, and expressing a strong desire to be a member of the opposite sex.
Gender Identity Disorder is diagnosed when in addition to the above, a child experiences discomfort, confusion, or aversion to his/her physical sex and gender role. It is important to note though that of those who have been diagnosed with GID in childhood, only about a third will still display gender identity issues in adolescence.

NOTE FROM JOY!
The Bible gives us guidelines for Biblical masculinity and feminimity that we can impart to our children. God will give you wisdom how to direct and parent your child.
ROCHÉ SNYMAN is a Counselling Psychologist and lecturer at the ICP.  For counselling or studies in Christian Psychology call 011 827 7611 or see www.icp.org.za